Nowadays, few people can imagine life without a smartphone. It has become our daily tool, which has many uses. We no longer use phones only for calls and messages. Often it is also various work activities, social networks, watching multimedia or entertainment.

We may spend too much time during the day looking at the phone display. Google's developers have come up with a feature that measures this time. It is integrated into the Android 9 Pie version and should help users reduce the sometimes extra time spent over the phone display.

Many mobile phone manufacturers did not want to be left behind and tried to integrate the function into their software extensions. Even the developers in Xiaomi did not hide and they have incorporated the Screen Time function into the MIUI superstructurewhich has a similar purpose as the application Digital balance from Google.

Screen Time is pre-tested in the latest version of MIUI 10 Global Beta. But last time we were informedthat public testing of global beta versions will be completed this month. Therefore, this feature is more than likely to appear in the next updates of stable MIUI versions. 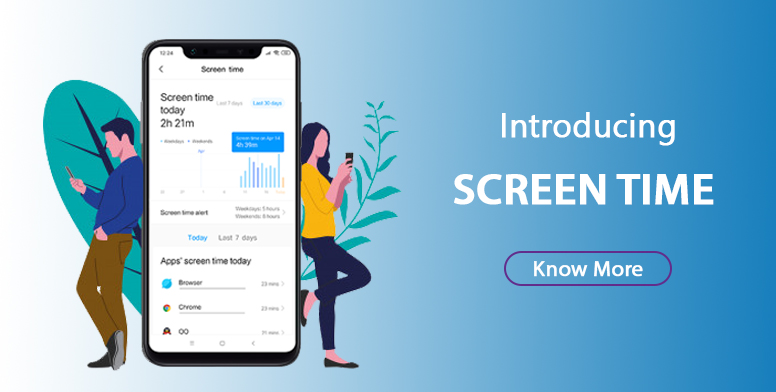 The new Screen Time feature is designed to monitor the time the user watches the screen. It concentrates the obtained information into graphs. The graphs show daily, weekly and monthly statistics. This gives users a broad overview of the use of smartphones.

And it wouldn't be Xiaomi if they didn't improve the basic functionality. With Screen Time you can set up separate time tracking for different applications installed on your phone. When the set time is exceeded, the system generates a notification and then automatically terminates the monitored application.

However, in order for the operating system not to control our lives, the user has the option to turn off the Screen Time notification and continue using the application without restriction. The variability of the Screen Time settings is also extended by the possibility of setting different values ​​for a working or weekend day.

How the Screen Time function works in MIUI:

The new feature is still in test mode

The Screen Time feature is still under development and has only been released for Android 9 Pie devices with MIUI 10 Global Beta. However, we believe that Screen Time will soon appear in stable versions of MIUI.