Spoločnosť Redmi as a subsidiary brand Xiaomi brought an affordable model Redmi K30, which will also appear in selected markets under another subsidiary brand LITTLE X2. However, we are also looking forward to an improved model Redmi K30 Pro, which according to current information should offer wireless charging, 5G and 33W fast charging.

Model Redmi K30 Pro could be very similar to a competing smartphone called Honor V30 Pro. In particular, the CEO of the Redmi brand published an interesting picture of the mentioned Honor smartphone.

In addition, Lu Weibing from Redmi also mentioned the K30 Pro in particular, on many occasions in the past he also compared his predecessors, ie the K20 Pro vs Honor V20 Pro. 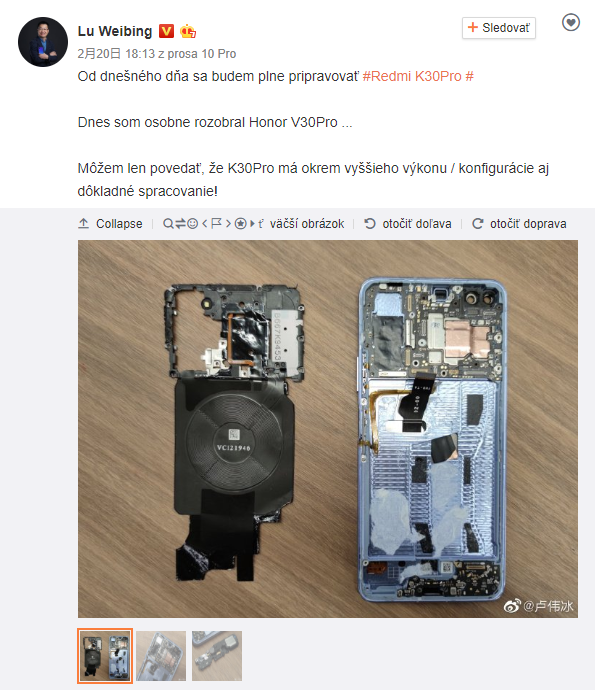 The most interesting of the whole situation is that this image allows us to see the insides of the model Honor V30 Pro, shows wireless charging in the foreground. The new feature first appeared in this generation of Honor devices.

If CEO Redmi talks about it, we could find a very similar technology in the bowels Redmi K30 Pro.

A pair of Xiaomi devices are currently 3C certified, just days after the unveiling of the 33W charging adapter that should come in the box. The codename of the pair is M2001J11E and M2001J11C and is expected to be the model version Redmi K30 Pro.

The equipment should also include an OLED panel and four rear cameras at the front with a sensor Sony IMX 686.

Although the certificate did not reveal the real name of the smartphone, some data was also leaked through the well-known GeekBench test. This shows that the new K30 Pro should arrive with the current flag processor Qualcomm Snapgragon 865, there will also be dual support SA / NSA 5G technology, complementing the equipment 8 GB RAM. According to Lu Weibing's previous statements, it could be of the type L.

Leakage of 33 W charging is closely linked to the capacity of the battery, which should stop at 4700 mAh. This is a slightly larger value than the basic model K30, which offers 4500 mAh.

The question still remains how the front camera will be handled. The K30 model includes a shot in the display with a pair of front cameras, but with the K30 Pro this technology has not yet been confirmed. It is thus possible that we will see, following the example of the predecessor of motorized technology.

Want more news on the Redmi K30 Pro? Subscribe to our newsletter.?

The first possible renders of Xiaomi CC10 / Mi 10 Lite have appeared. Shot in the screen and a 64 MPx camera