The Xiaomi Mi True Wireless Earbuds Basic 2S headphones are available at the well-known online marketplace Aliexpress. Don't forget to use too 2,53€ "Store Coupon" for an additional discount. The price and the coupon are limited in time, so in case of interest, hurry up. 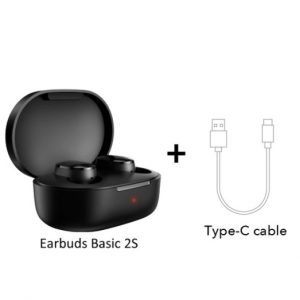 The product will be delivered to you via AliExpress Standard Shipping. In this case, you will pay for the transport 3,54€. You can expect a shipment in the range from 20 do 27 working days since its dispatch from the warehouse. This should take place within 24 hours.

Improved in every way

The novelty from Xiaomi is made practically from the same ABS plasticlike its predecessors. It is a matt plastic, black plastic, which is quite resistant to its thinness.

Given that virtually everything has been improved compared to previous AirDots 2, we believe that the hinge, respectively. the opening lid has been reinforced.

The headphones got 7,2 mm converter, which makes the sound louder, clearer and better. Digital noise reduction is also present when listening to music or making calls. There is also a newer wireless standard Bluetooth 5.0which has a range of 10 m.

The battery has been magnified up to 2 times compared to the previous generation. Specifically, this is a jump from the original 300 mAh to 600 mAh. In this case, however, it is a charging case.

The control has also been improved, which this time is no longer hardware, but full touch. With multiple or short and long presses of the handset, you can answer or reject a call, stop or start music, call a voice assistant or activate game modewhich the headphones also have.

In addition to its low weight, which is only 4,2 g, the headphones are also equipped with the above-mentioned game mode, which reduces the overall response of the headphones when switched on.

Along with a little information LED diode located on the headphone charging case itself, we also have here higher degree of protection when worn, resp. sweating.

The global version of the flagship Xiaomi Mi 11 has been certified. Detects memory variants