Xiaomi CC9e as Xiaomi Mi A3 for the global market? This is indicated by the latest information - Xiaomi Planet

Xiaomi CC9e as Xiaomi Mi A3 for the global market? This is indicated by the latest information

Xiaomi CC9, CC9e and CC9 Meitu Custom Edition are fresh smartphones in the brand new CC series of smartphones. Xiaomi created it in cooperation with the brand from which it bought shares. These are smartphones aimed primarily at young people and for quality photos.

Once these pieces were introduced, speculation began about their availability in the global market. Now we have a lot of new information that confirms the arrival of at least one model on the global market. However, under a different name. The smartphone should be built on a platform Android One.

On the website FCC International Certification Authority has appeared a smartphone with model number M1906F9SC. The FCC has also released a pictorial label showing a device with a back cover similar to that of the Xiaomi CC9e, but with the Android One logo in the lower right corner.

The image on the label shows that this device supports either DualSIM or a SIM card and microSD card. In addition, the dimensions submitted to the Authority are the same as those of the Xiaomi CC9e. We can also notice label with Android One logo.

We can also see text on the label that only confirms the use of the 48 MPx camera. Due to the size of the vertical cut-out, we are almost certain that it will be a triple camera, essentially the same as the Xiaomi CC9e.

The model designation is identical

According to the Chinese certification authority TENAA, through which every new Chinese smartphone passes, the Xiaomi CC9e belongs to the model designation M1906F9SH. If we compare this number with the M1906F9SC, which is listed by the FCC, we have another indication of the existence of this model.

The difference is only in the final letters, the Chinese model at the end contains H, the international C. The basic name of the model, "F9S", remains consistent. 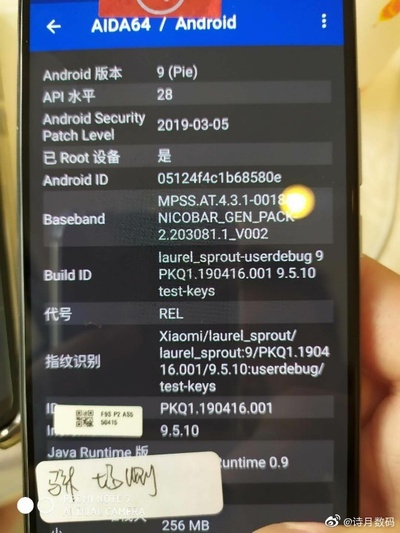 Another convincing, but as yet unconfirmed, evidence is a photograph from Weibo. It shows a Xiaomi smartphone codenamed "laurel_sprout". All Android One smartphones introduced so far have the suffix "_sprout", which adds even more to reality.

The IMEI database reveals the name

The latest proof of the existence of the new Xiaomi smartphone with the Android One system comes from IMEI database Ting. The IMEI database identifies the device with model name M1906F9SC and IMEI number 864087040013098 as Xiaomi Mi A3.

In the international market as Mi A3?

All this information is very convincing and suggests that the Xiaomi CC9e will really be introduced on the international market under the name Xiaomi Mi A3 with Android One. However, we must take into account that none of this information is confirmed.

We already have experience with a similar renaming of Chinese models to Mi A * models. Xiaomi did so with the Mi 5X model, which it sold in a global version under the name Xiaomi Mi A1, also with the Android One system. The same scenario occurred with the Xiaomi Mi 6X, which we know as the Xiaomi Mi A2.

We are very curious how the situation regarding the Xiaomi Mi A3 will develop. Be sure to keep an eye on us, you will be the first to know about the new information. We will also send them by e-mail.

Xiaomi patented a new camera technology. The first one will probably get Mi MIX 4