Xiaomi Mi 11 already leads the ranking of the most powerful Android smartphones. However, the lead is smaller than we would expect

The Snapdragon 888 5G made its debut on the Xiaomi Mi 11. Although only a few moments have passed since the show itself, we now have a list of the top most powerful smartphones for December according to the AnTuTu benchmark.

Xiaomi Mi 11 as the most powerful smartphone

As the Xiaomi Mi 11 is currently the only smartphone under the hood of which we find the Snapdragon 888 processor, it is not at all surprising that the device is placed at the top of the list. 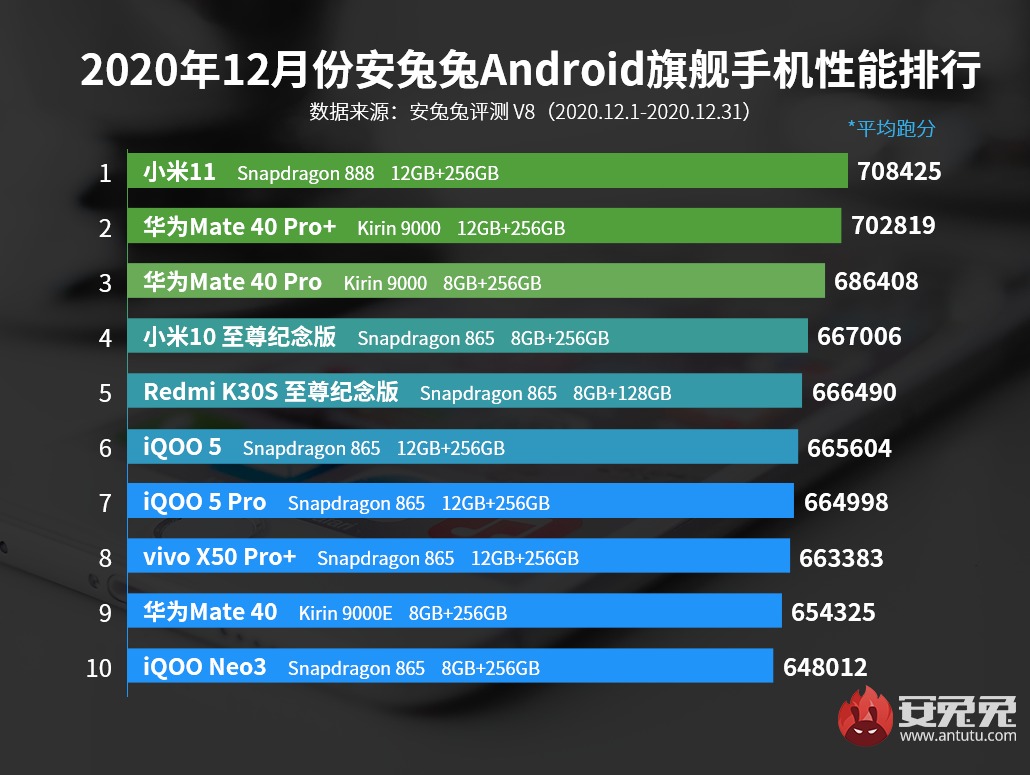 The Mi 11 model from the production of the Chinese giant was rated at 708 425 points. Surprising, however, is the result of the Huawei Mate 40 Pro + smartphone powered by a processor from its own production - Kirin 9000, which is placed in a tight sling with minimal loss. Rating was on 702 819 points.

The third place was again taken by Huawei, specifically Mate 40 Pro, with a Kirin 9000 processor and pleasant 686 408 points. The fourth place went to the Xiaomi Mi 10 Ultra smartphone, which he took home 667 006 points.

Fifth place belongs to the equipment from the budget workshop of the manufacturer Redmi - Redmi K30S with the flagship Snadpragon 865 5G and 666 490 points. In sixth place we find the smartphone iQOO 5 with the number points 665 604 and the seventh bar belongs to the improved sibling iQOO 5 Pro s 664 998 points.

The final trio ends with a smartphone popular on the Chinese market - in vivo X50 Pro +, again with a chipset of 865 5G and the number points 663 383. Ninth place was taken by the last Huawei smartphone on the list, the Huawei Mate 40, which won in a ruthless benchmark 654 325 points.

In the tenth and last place we find the iQOO NEO3 smartphone with a Snapdragon 865 5G processor and beautiful 648 012 points.

For other interesting things not only from the world of smartphones, regularly follow our technology portal XiaomiPlanet. If you don't want to miss any hot news, join our new facebook group and subscribe to articles directly to your inbox.

The Czech-Slovak community Miuios.cz has already released MIUI 12.5 in both Slovak and Czech. It is available for these models

The first, very preliminary leak of the specifications and design of the Xiaomi Mi 11 Lite smartphone