With its flagship Mi 10 Pro, Xiaomi once again proves that it is one of the most powerful smartphones in the world. After updating the system, which improved graphics performance, it broke the boundary 600 000 points in the known benchmark test.

You will definitely know AnTuTu benchmark, an application where the performance of smartphones is tested. Last year, the flagships exceeded the limit of 500 points, while the Mi 000 Pro already managed 10 more.

It was also tested with cooling

The test results were shared in his Weibo account by the General Manager of Marketing for Xiaomi in China. Shows a screenshot of a high score 610 627 points. 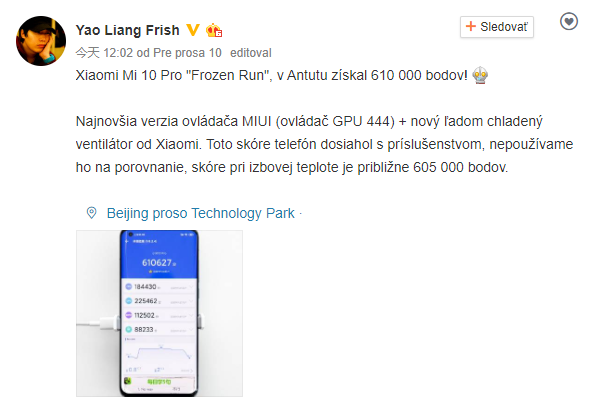 It further states that the Mi 10 Pro was tested with GPU 444 driver as new cooler from Xiaomi. So the score was also supported by accessories and it wasn't just about the net performance of the smartphone. The score without a cooler is around 605 thousand points, which is also really respectable.

Software update with other improvements

These are therefore minor improvements in features that the average user might not even notice. The most significant improvement is the performance of the graphics chip itself Adreno 650. It is integrated in the Snapdragon 865 processor from Qualcomm. Even according to the results of the benchmark, we can declare that it is the most powerful mobile chip ever.

This is a big improvement over last year, when flagships had trouble exceeding the 500-point mark. The new year didn't even really start and Xiaomi Mi 10 Pro managed to conquer 610 points. So far, the tactic of removing the Xiaomi price cap is based on both sales and performance.

The Mi 10 Pro also took first place in the DxOMark camera test, and people are buying it crazy. His first sale ended in 55 seconds, and overall the company has already risen EUR 26,5 million.