This ranking is compiled from smartphones that are sold on the global, ie also European, market and is created by averaging the measurement results of individual smartphones.

In the results for the past month, ie May 2020, the flagship smartphone with the label is still the leader Xiaomi Mi 10 Pro. With a powerful Snapdragon 865 processor and a configuration of 8 GB RAM + 256 GB storage, it gained a total of up to 590 points. 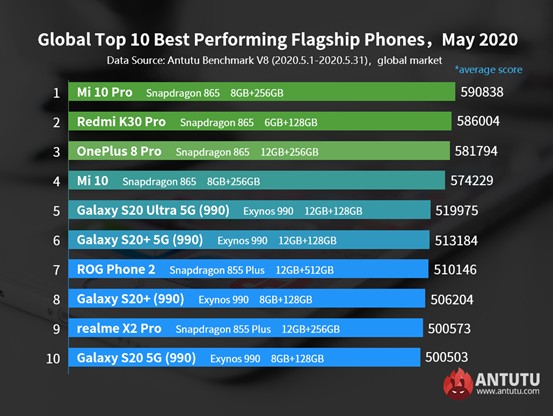 In second place was the model Redmi K30 Pro, also from the workshop of the same Chinese manufacturer. With the same processor in a 6 GB RAM + 128 GB storage configuration, it gained up to 586 points.

Third place, just behind a pair of devices from Xiaomi, was won by a popular smartphone OnePlus 8 Pro. Equipped with a Snapdragon 865 processor and a configuration of up to 12 GB RAM + 256 GB storage, it earned 581 points in the ranking.

On the lower partitions Samsung or ROG Phone

The fourth place Chinese Xiaomi only confirms its dominance in the field of performance. model Xiaomi Mi 10, which we tested also in our country, he gained a total of 865 points with the Snapdragon 574 processor. The smartphone won fifth place in the current ranking Samsung Galaxy S20 Ultra 5G with an Exynos 990 processor and a gain of 519 points.

A smartphone was placed on the sixth place Samsung Galaxy S20 + 5G with an Exynos 990 processor, scoring 513 points. Seventh place rightfully has a powerful gaming smartphone with a sign ROG Phone 2. It contains a processor from last year called Snapdragon 855 Plus, but received a total of up to 510 points.

China's Xiaomi thus reaffirmed its performance dominance in the global market in May. The brand's smartphones took first, second and also fourth place in the ranking. Did you find your smartphone in the ranking? You can write your comments and opinions to us in the discussion below the article.

These are the main differences between Xiaomi Mi Band 5 and Mi Band 4. Is it worth moving to the latest generation?