According to AnTuT, Xiaomi Mi 10 and Mi 10 Pro are currently the most powerful Chinese smartphones - Xiaomi Planet

According to AnTuT, Xiaomi Mi 10 and Mi 10 Pro are currently the most powerful Chinese smartphones

Testing the performance of mobile smartphones in the benchmark AnTuTu I guess we don't have to introduce anymore. We also bring regular performance testing reports on our website, as well as records achieved by new smartphones.

Spring slowly alternates between winter and brings AnTuTu ranking of the most powerful Chinese smartphones for the month of February / February 2020.

We did not doubt the winner for a moment

The statistics were collected for the period from 1.2.2020 to 29.2.2020. The individual score in the ranking is the average score calculated from more than 1000 tests for each device in the AnTuTu version 8 application.

Here are the most powerful Chinese phones for February / February 2020: 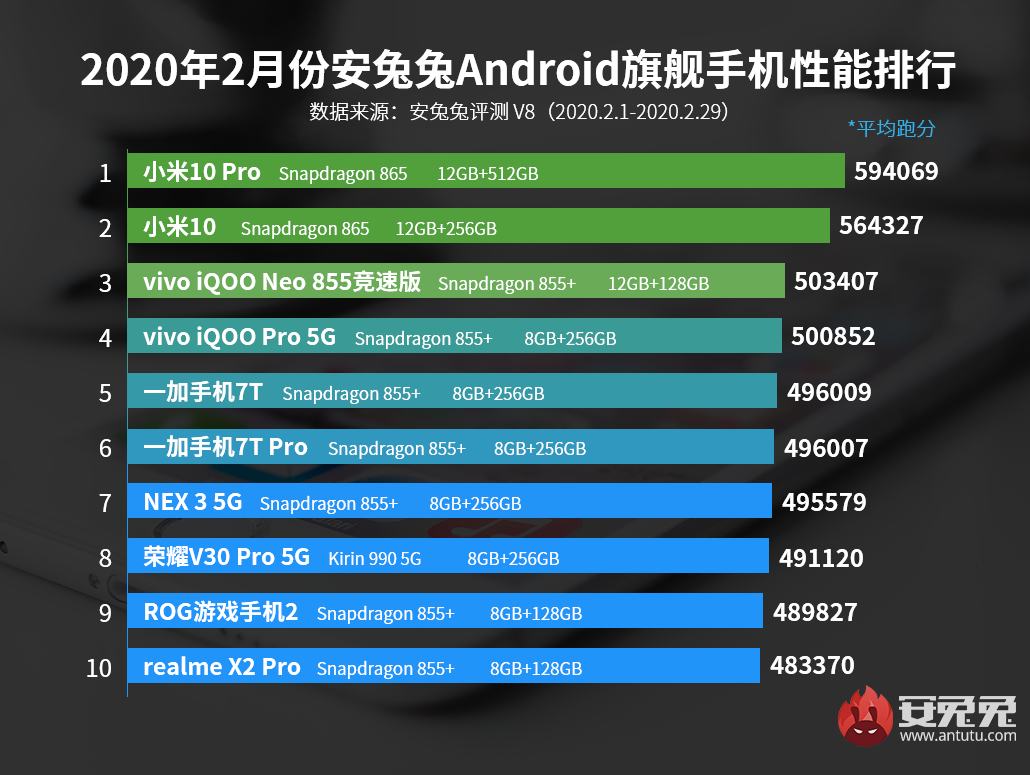 We were not surprised at all by the result and we have known the sovereign winners for a long time. But let's be fine. When we look at the TOP 10 ranking, not only individual smartphone models are interesting, but also their hardware equipment.

We can see that devices with Snapdragon processors got into the evaluation. The SD865 model dominates and on the lower rungs it is the SD855 + processor. The Kirin 990 5G chip also took one position.

The first and second ranks deservedly and unequivocally belong to the current king Xiaomi Mi 10 Pro a Xiaomi Mi 10 with the number of points for performance 594 069 a 564 327. Their configuration is the same, but the Pro model was helped by the higher UFS 3.0 storage capacity to a higher score. Thanks to that, he got the Mi 10 Pro the most points and became the clear winner.

It is also worth noting that the Xiaomi Mi 10 series received a new version of MIUI at the end of February, which contains the latest GPU 444 driver. This was immediately reflected in the test results, but just before the ranking closed. Therefore, both Mi 10s are expected to achieve even better results in the March assessment.

Competition so far with older hardware

Right behind him with the score 500 852 a model of the same brand was placed I live iQOO Pro 5G with the same processor and 8 GB of RAM and 256 GB of storage. Vivo smartphones maintained their lead over other models with the SD855 + mainly due to software optimization.

The devices use a technology called Turbo Write, HPB technology, and Monster compilation enhancement technology. These fully develop the performance of the hardware and, in conjunction with multiple cooling technologies, can keep the processor running at high frequency. This achieves better performance than conventional models with the Snapdragon 855 Plus.

Interesting results in other places as well

Very interesting are positions 5 and 6, where OnePlus smartphones were placed, namely models 7T a OnePlus 7T Pro with almost the same average score 496 009 a 496 007. The hardware configuration of both devices is the same and this was reflected in the close result. Interestingly, the Pro model lags somewhat behind, although one would expect that their location could be the opposite.

The last partitions 7 to 10 belong to the model:

As already mentioned, the ranking was compiled from Chinese smartphones with the Android operating system from the average score for the month of February / February 2020. Here, too, it is confirmed that not only sufficiently powerful hardware but also software optimization can provide a significant increase in performance.

Xiaomi COOWOO is the best smart phone holder we've ever tried. It has a great price