Xiaomi and Qualcomm have developed a new Game Turbo mode for smartphones. Allows you to set up the GPU as on computers

Gaming features also come with the new gaming smartphones. You also got a new one Red Magic 5S for its full use of the potential. Several manufacturers, including Xiaomi, are already working to improve the gaming user experience.

Many of the game modes or improvements to the graphics chip of smartphones have already been brought by the company Huawei, which is also constantly working on their improvements.

Xiaomi has together with the company Qualcomm big plans with Game Turbo functionality that should debut along with the show Xiaomi Mi 10 Pro +. The two companies work closely together to bring a detailed customization of several elements of the smartphone's graphics chip.

According to information from leakster Ice Universe another model from the Mi 10 series should be called We 10 Pro +, which we have heard about in the past. However, we do not yet know whether this smartphone name is final. It is possible that We 10 Pro + a My 10 Ultra there will be 2 different flag models.

the same leakster in my Twitter The article also brought information about the functionality Game Turbo, which should greatly improve the performance and capabilities of the graphics chip. It should offer detailed graphics chip settings similar to those on PC platform.

New game mode from Xiaomi in cooperation with the Qualcomm according to the published photos, it should bring a small revolution in the field of games in the field of the mobile division. Settings similar to on should be available PC platform, such as anti-aliasing, texture sharpness, quality of details and the like.

Super Leak ： Xiaomi Mi10 Pro + has a unique feature: Game Turbo, a mode developed by Xiaomi and Qualcomm's GPU team, which is unprecedented. You can use it to adjust GPU parameters and modes, including GPU frequency adjustment and so on. pic.twitter.com/Tu609T7Dy9

Game Turbo it will also allow setting the frequency and power of the graphics chip, ie some kind of overclocking.

However, it is not yet known whether these features will be applicable to all game titles or only to some. This advanced game function will surely please many gaming enthusiasts. 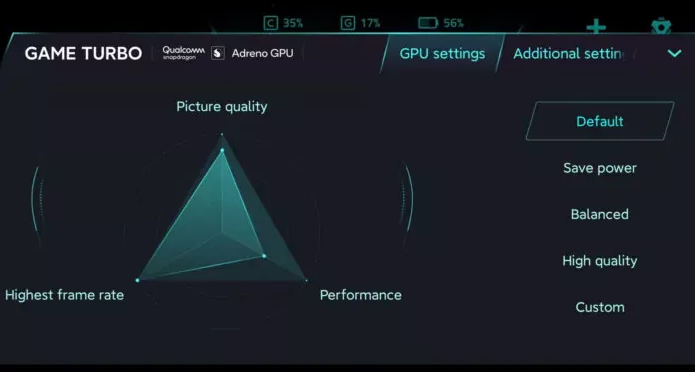 The only question left is the name and parameters of the new flagship of the series My 10. Would you consider buying a new flagship smartphone or would you rather choose more affordable devices from the middle class? You can safely write your observations and opinions in the comments below the article.