Xiaomi is already sending the latest Xiaomi 12S Ultra to its stores in China. The leaked photos confirm the cooperation with Leica

Our favorite Chinese manufacturer Xiaomi is preparing its upcoming premium flagship smartphone with the sign Xiaomi 12S Ultra. And it is already sending this model to its stores, while the official performance itself should take place as early as July 2022.

After announcing the partnership with the company Leica, for the upcoming flagship series of premium smartphones, has Xiaomi introduce new equipment with the label in July Xiaomi 12S. Although the brand has not yet announced an official launch date, recent leaks from Chinese electronics retailers suggest that a press conference will be held in a few days, July 5, 2022. 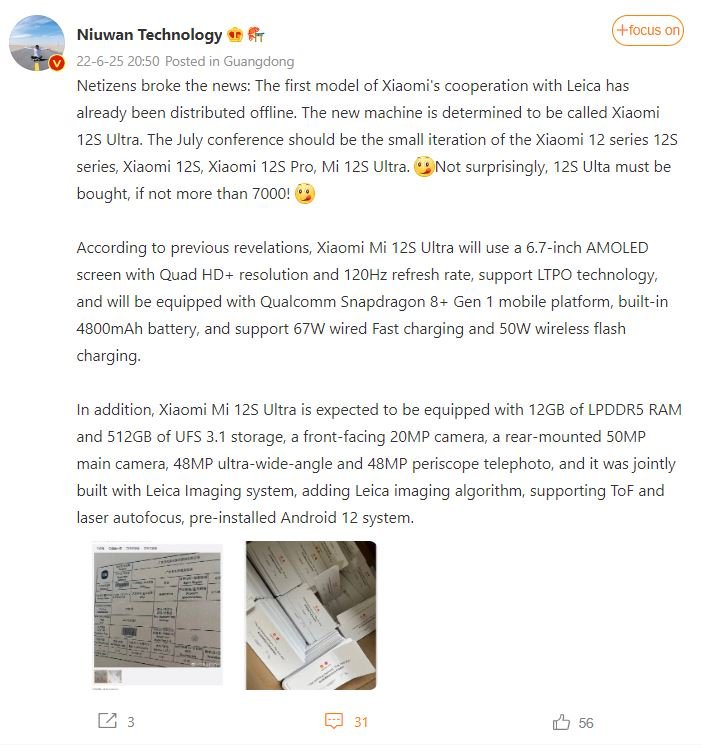 A user with a nickname Niuwan Technology he even posted a photo on the Chinese social network Weibo. She says that several "offline" sellers, ie operators of stone shops, started to receive marketing materials for equipment from the series Xiaomi 12S. These should be specifically the Xiaomi 12S, Xiaomi 12S Pro and Xiaomi 12S Ultra.

Marketing materials emphasize the collaboration between Xiaomi and Leica

A very interesting step from the Xiaomi brand is practically omitting the long-awaited one model Xiaomi 12 Ultra. He will probably arrive as Xiaomi 12S Ultra, and thus as part of the new flagship series Xiaomi 12S. Along with the smartphone, there are also gift packages and other promotional materials in the photo.

In this case, however, the renaming makes sense, especially given the expected processor. The whole series, ie the whole three devices, should be equipped with the latest processor Qualcomm Snapdragon 8+ Gen 1. It will also be Xiaomi's first flagship to be created in collaboration with the German brand Leica.

The marketing materials mentioned also include invitations to the launch of the series Xiaomi 12S. And the invitations themselves highlight the collaboration between the Xiaomi and Leica brands, as well as the plan to create a new era of mobile photography. The invitation also includes the signature of the chairman of the company Leica, Andreas Kaufmann. and also the CEO of the company Xiaomi, Lei Jun.

How do you like the upcoming flagship smartphone Xiaomi 12S Ultra? If you have any other questions, you can write to us below, in the discussion below the article. Follow our group on Facebook: Xiaomi Planet - A place for real Xiaomi fans as well as our portal Xiaomi Planet and find out more.