Need to buy AAA batteries for the controller

Chinese company Xiaomi offers in its portfolio also practical gadgets for smart home. Xiaomi Mi TV Stick it can also turn your monitor or older TV into an intelligent device with the system Android TV.

We ordered the Xiaomi Mi TV Stick from a certified Edwaybuy retailer, who delivers the goods exclusively from a European warehouse. Delivery to our address took only 6 days, which is excellent.

equipment Xiaomi Mi TV Stick comes in a compact and very simple box. It is orange and, in addition to the name and image of the product, it also offers the logos of several leading streaming services that it supports within the Android TV system. 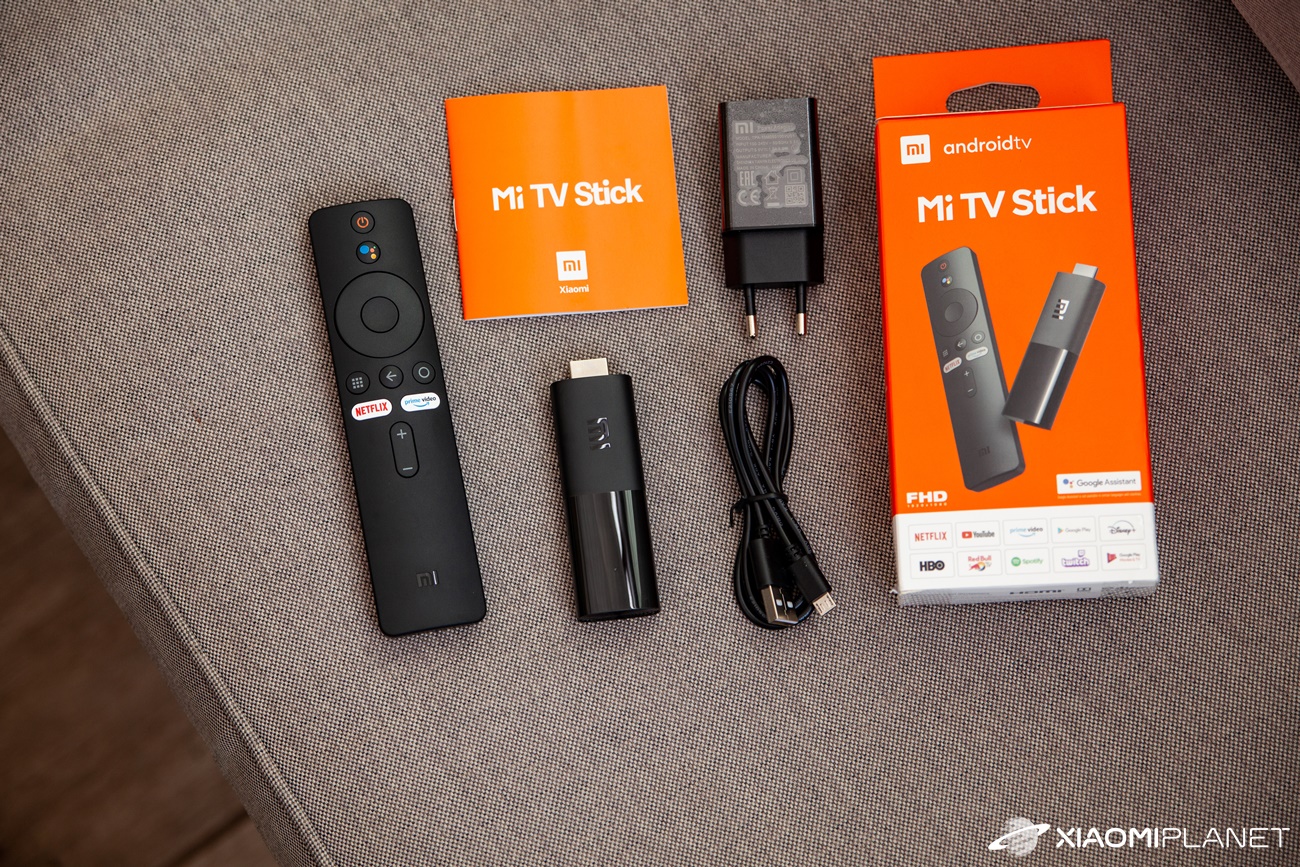 After unpacking the box, a special paper box will appear inside, which is not only difficult to unpack, but also to subsequently pack the product. However, let's move on to its content.

This box mainly includes the Mi TV Stick product itself wrapped in a protective foil, as well as accessories. It comes in the form of a microUSB cable designed to be powered with a local European connector. There is also a traditional remote control from Xiaomi, which this time has highlighted Netflix and Amazon Prime services.

The package also includes a brief paper manual. This time we will not find an HDMI cable in the package, as this connector contains the device itself on the body. However, the package does not even contain a pair of Aaa batteries for the controller, so they must be purchased separately. When packing, the low selling price of this product was definitely considered.

Xiaomi Mi TV Stick is a cheaper alternative to the well - known product Xiaomi Mi TV Box S 4K. It is with this product that it is often the target of comparison. 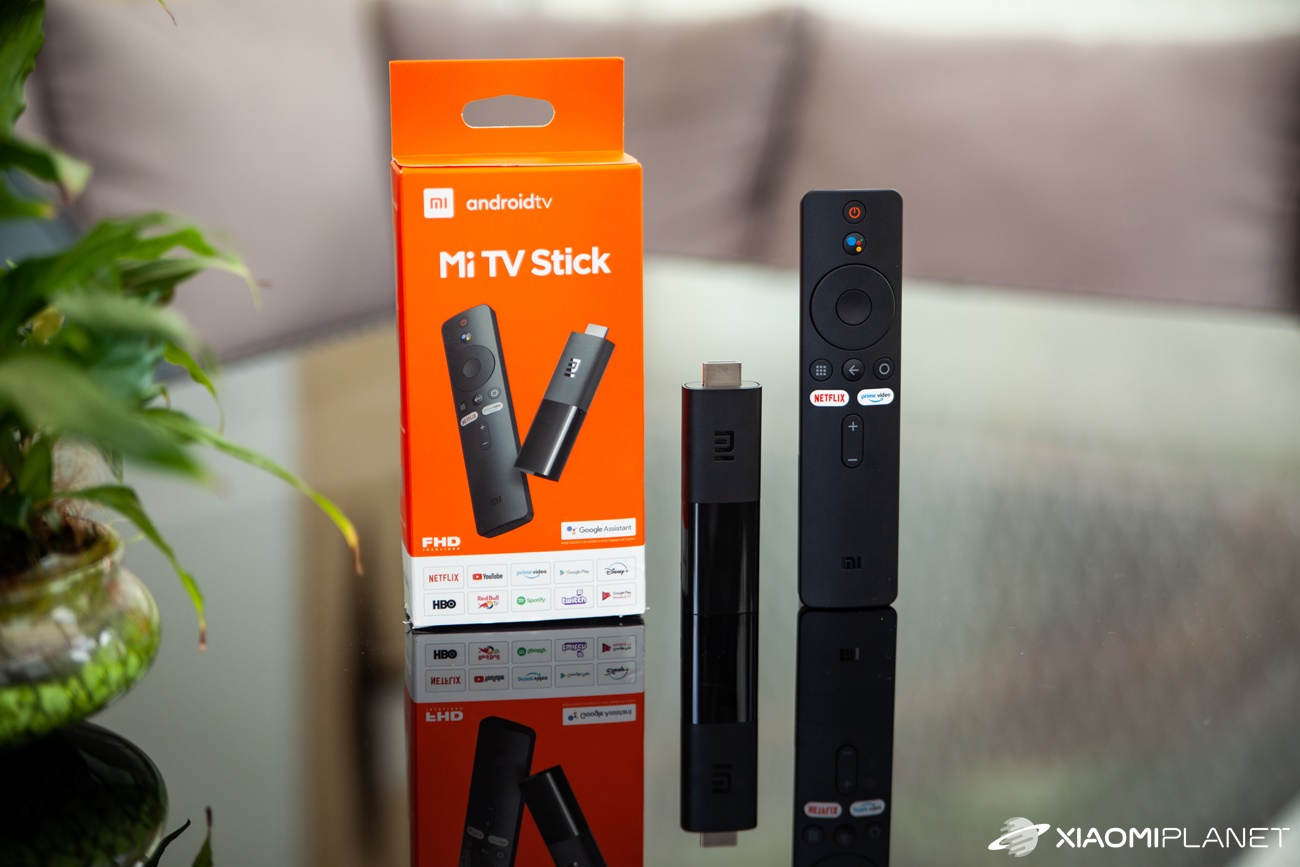 Even more so, however, the manufacturer's processing itself is similar to Amazon's alternative. With the connection of services from Amazon, the Fire TV Stick is a kind of extended hand of these services in your TV. Xiaomi with Android TV is now trying to do something similar.

Despite being a direct competitor to Amazon's product, the Mi TV Stick also offers Amazon Prime services, even with its own button on the remote control. Xiaomi is thus certainly aware of the strong position of its competitor, but at the same time offers the integration of these services.

Despite the fact that this device is very simple, it offers a really high-quality construction. The plastic body has overall dimensions of 9,50 x 3,50 x 2,00 cm and a weight of only 85 grams. It is thus a portable and really light device. 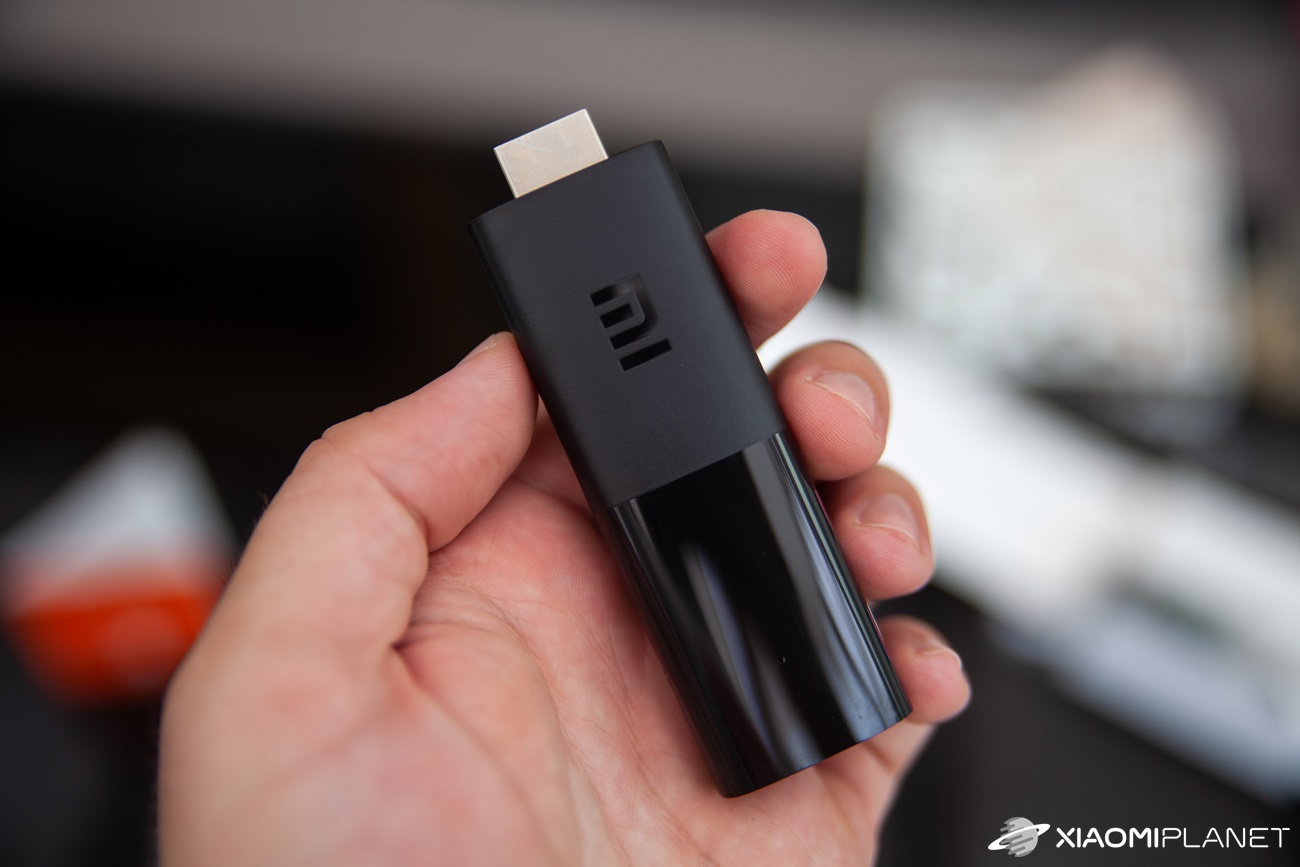 Although it is a plastic body, the Mi TV Stick is a very well-crafted device and all its parts hold together for example. On the front, the matte finish alternates with the manufacturer's logo and a glossy finish that includes a notification LED. This LED indicates the connection of the device.

On the top there is a connector for connecting a microUSB power cable and the left side is home to the HDMI connector (HDMI 2.0a standard).

The back side also contains mandatory recycling data in its matte part. That's practically everything from construction. Equally important, however, is the remote control.

The package of this product also contains the remote control itself, which is, however, very simple. It is a similar model as we know from modern smart TVs Mi TV or from the mentioned Mi TV Box S. 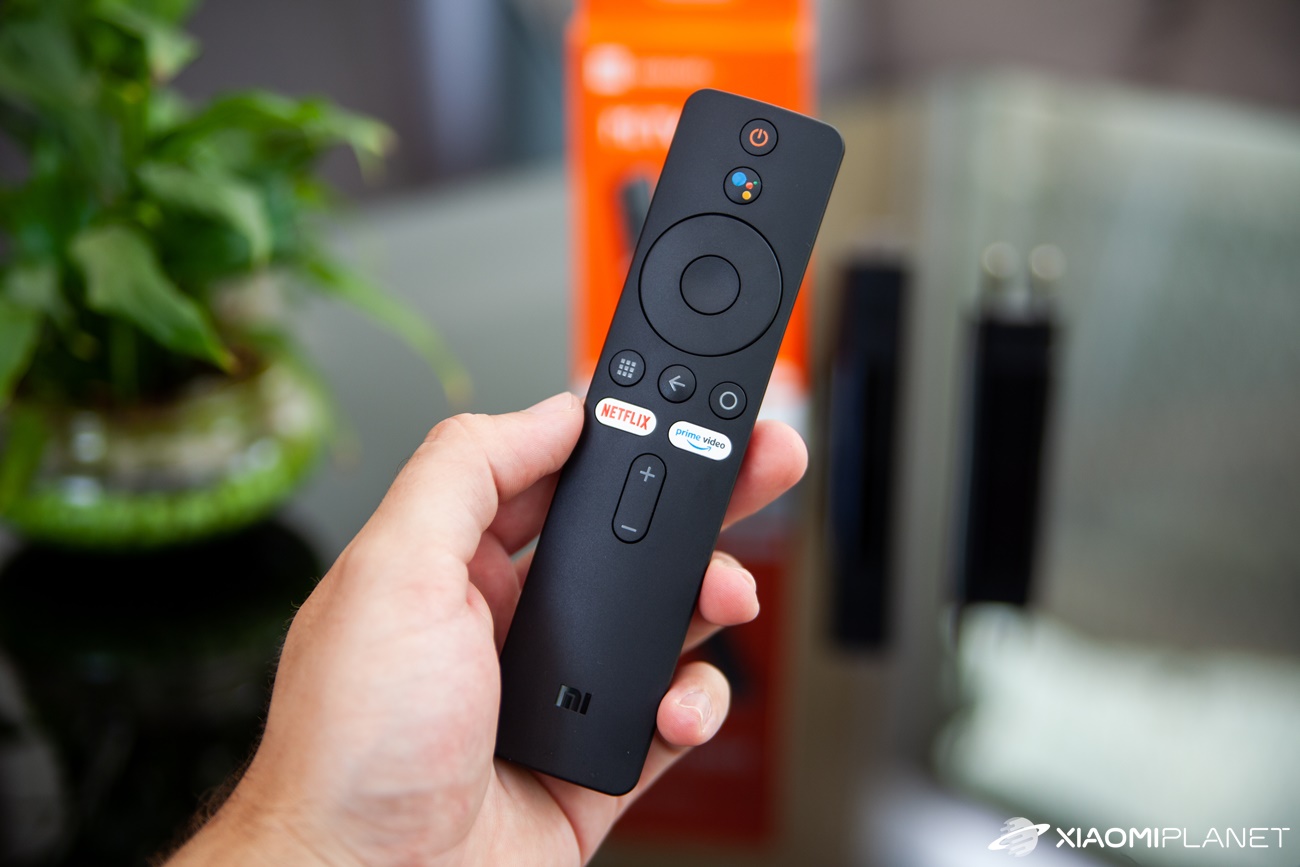 The remote control has a plastic body, is connected via Bluetooth technology and responds really fast. The remote does not even have to be pointed at the device, it is enough to be within range of Bluetooth at a distance of about 10 meters. 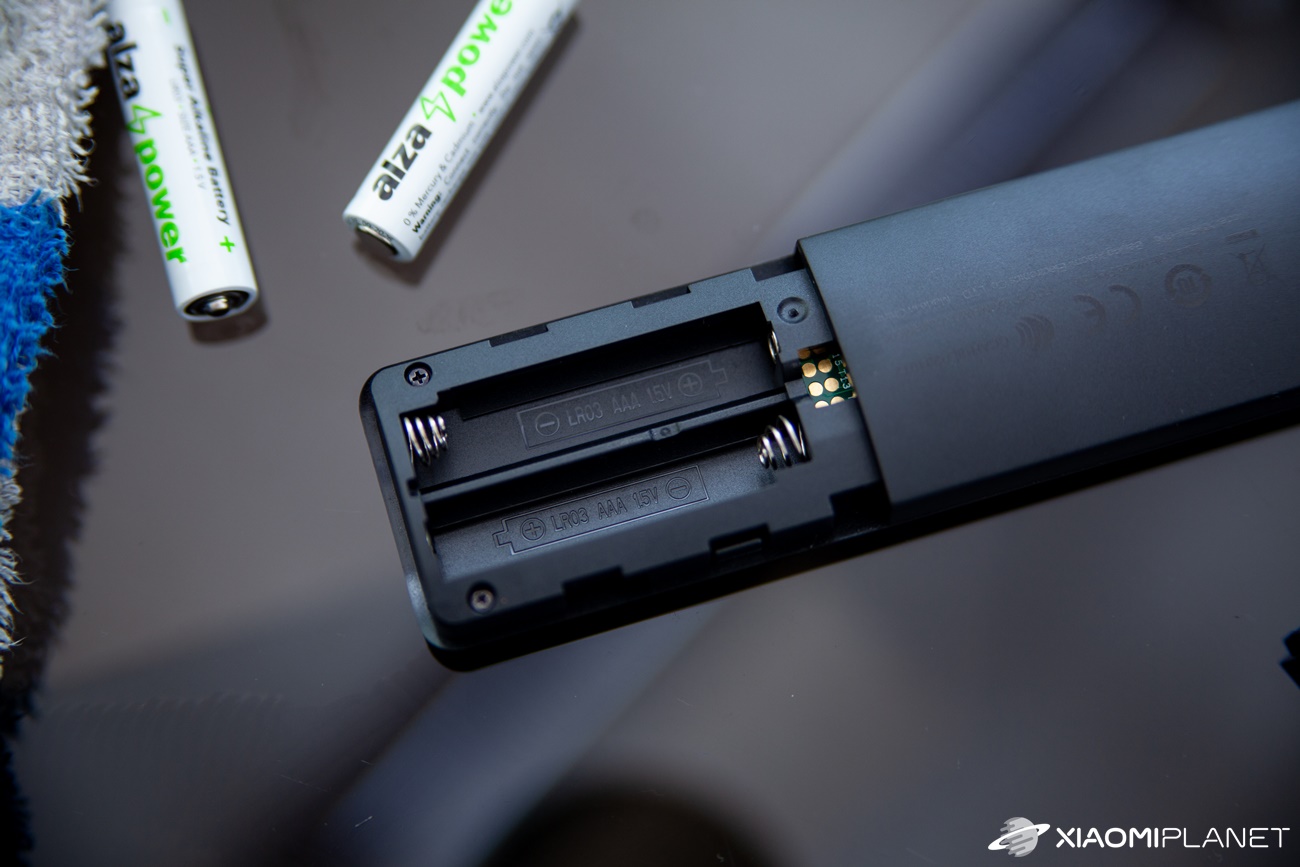 It is a pity that the batteries for the controller must be purchased separately. In the case of the more expensive Mi TV Box S, they are directly in the package. In addition, however, the connection of the controller is very fast and the device will even guide you on the screen as this connection needs to be made.

The batteries are inserted from the back, which also contains recycling data. But the most important thing is on the front. There are several buttons available from the top, and this is traditionally used to turn on or off. turn off the device. 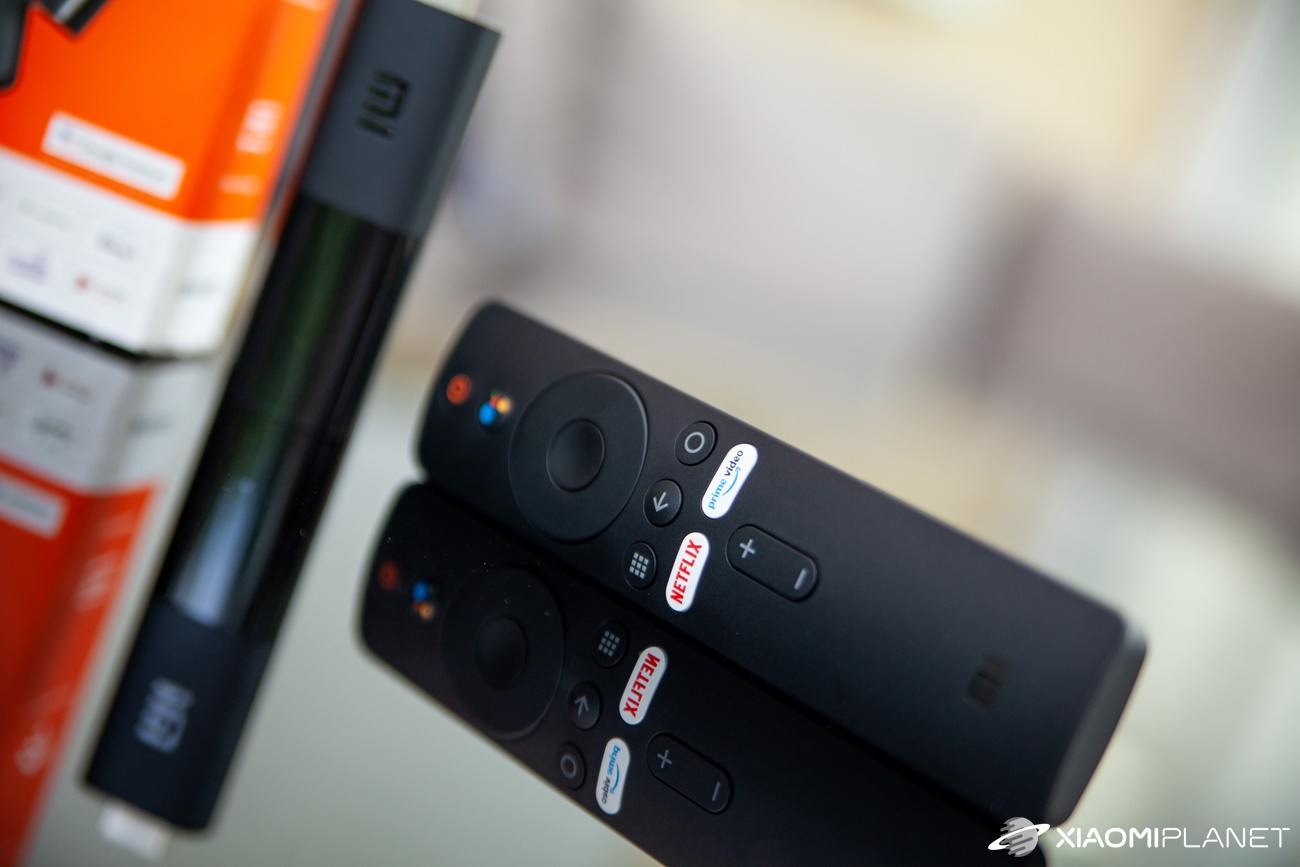 Just below it is a button to call up the Google Assistant with the option to enter voice commands. This is because the controller also contains a microphone at the top edge, so it is possible to say commands directly to the controller and not to the device.

This is really useful, especially if you don't want to write handwritten and letter by letter long title of a song or movie in one of the supported services.

Below are five sideways and confirmation controls. You will use them not only for games, but also for controlling the Android TV system itself. Below them is the traditional three control buttons for menu option, step back and return to the home screen. 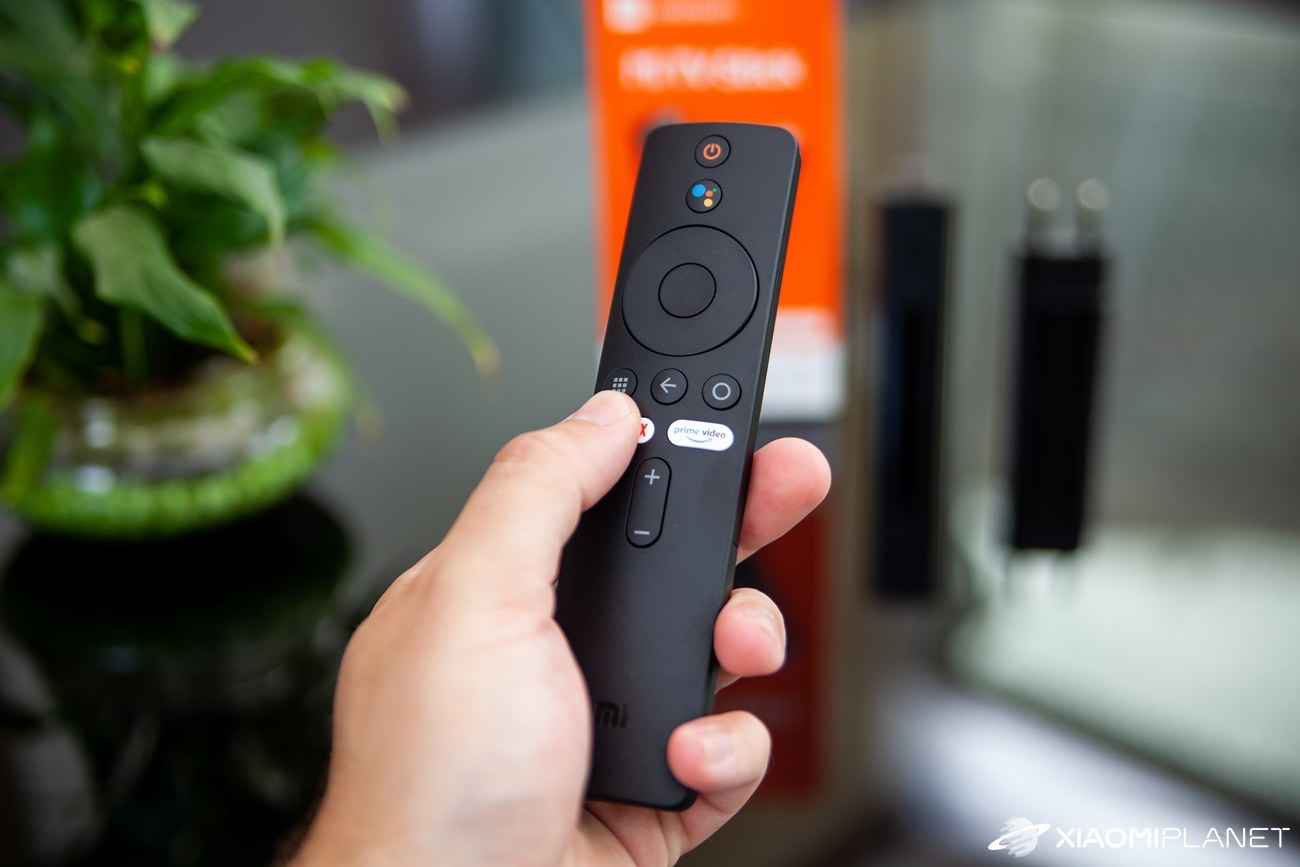 Below is a pair of specific buttons for Netflix and Amazon Prime, followed by a pair of volume buttons. At the bottom is only the Xiaomi logo.

The controller thus offers a total of 14 buttons and still retains its practical and compact dimensions. The buttons are easy to feel and make a significant downward movement when pressed, which only improves the safety of use.

The product contains 1 GB of RAM, which is supplemented by 8 GB of internal storage. This cannot be expanded with a memory card or a USB key, unlike the Mi TV Box S. However, it is enough to install several dozen applications or games from the Play Store. 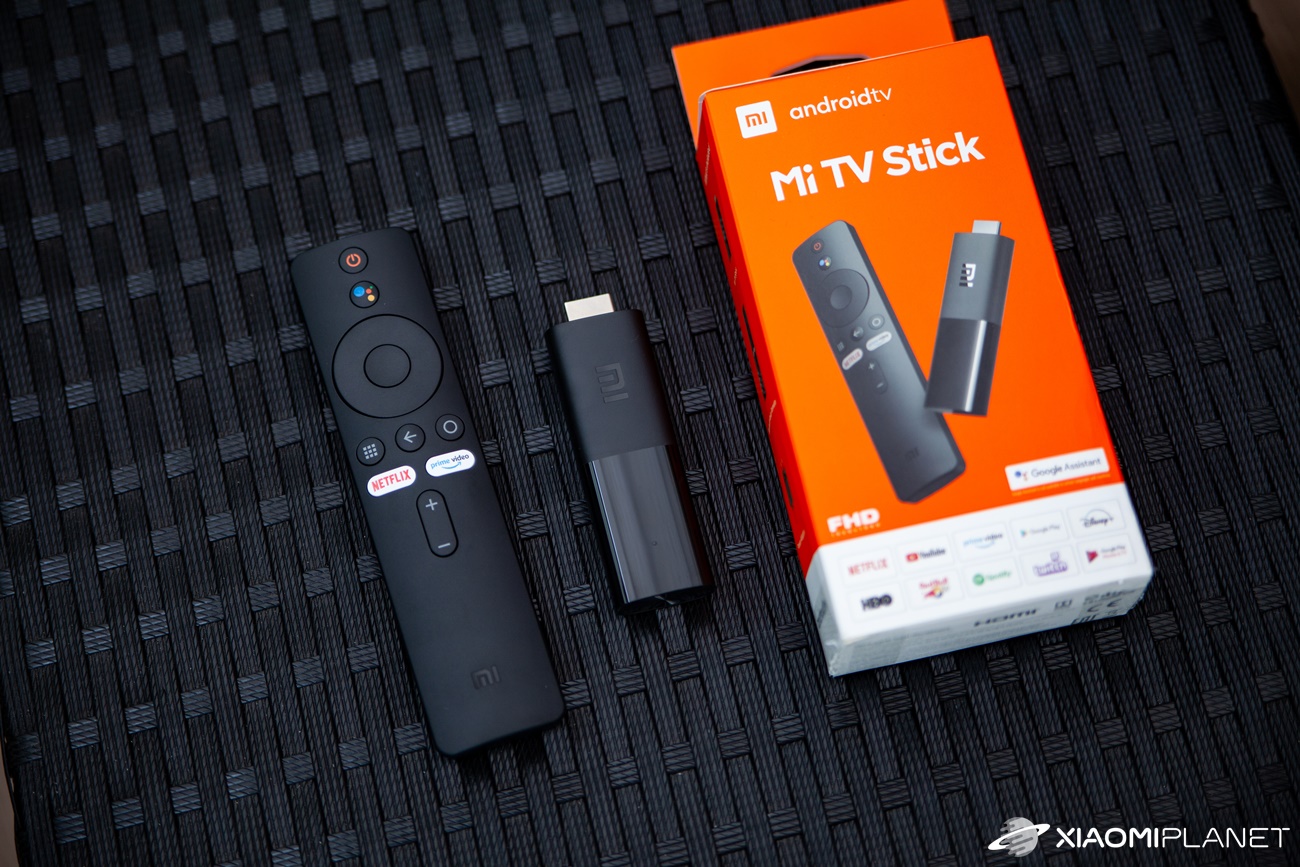 The ARM Mali 450 processor in this device supports 1080p video content (with HDR technology support), unlike the 4K content offered by the aforementioned Mi TV Box S. However, this resolution will be sufficient for most users and their home screens.

Features: Even intelligent from a "stupid" TV

The device is ideal for older models of TVs or monitors, but they already offer an HDMI connector. The primary use of this device is thus an added value to an older appliance which, thanks to the Mi TV Stick, will acquire the Android TV operating system, relevant applications or Play Store services and other smart features. 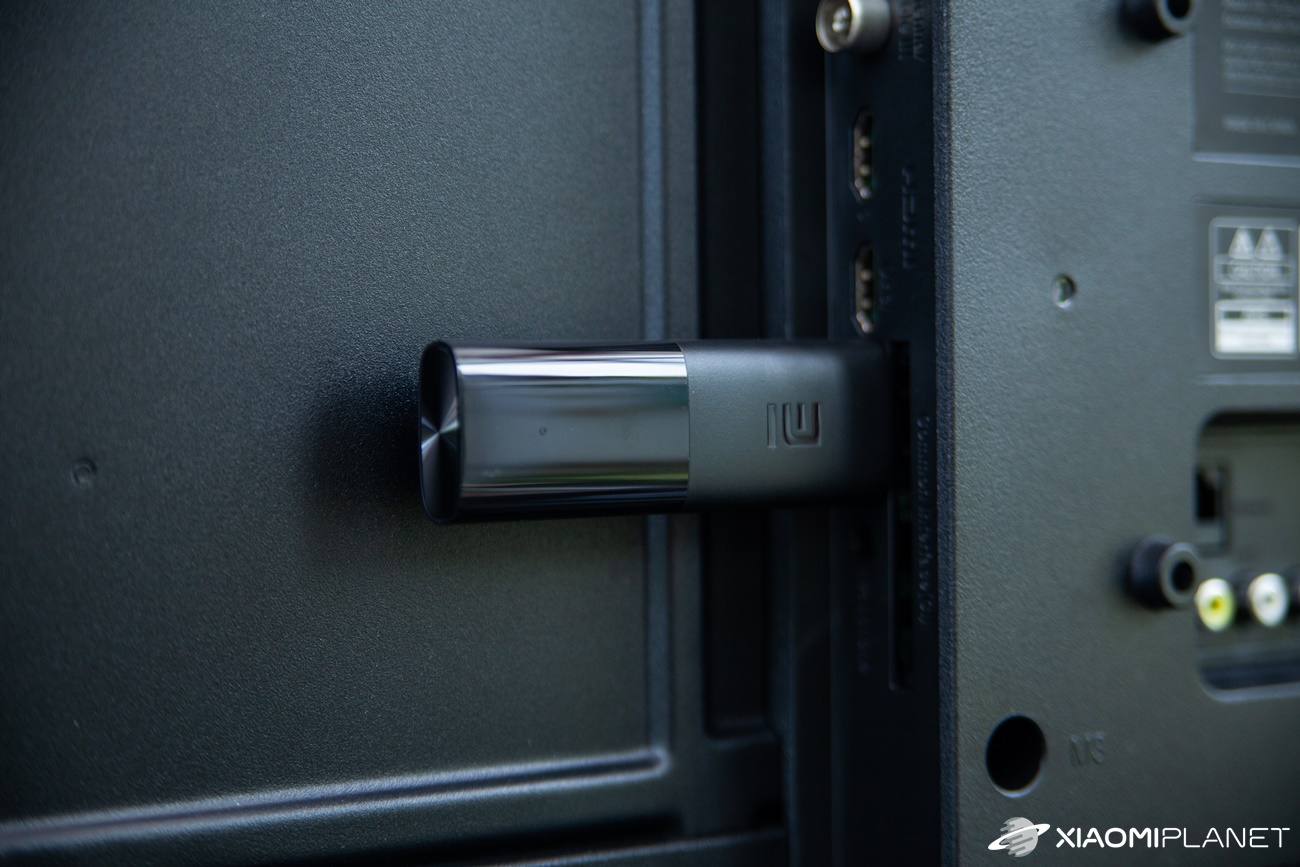 Fans of quality resp. The premium audio experience is definitely pleased with DOLBY-DTS technology, which further enhances the movie or music experience played through this device. Mi TV Stick also supports up to 5.1 audio output.

Voice control support brings with it the integration of Google Now, which can not only search for information in relevant services, but can also control the products of your smart home. You can launch the vast majority of products directly via the controller, for example from your library in the Mi Home application.

Chromecast is also a very welcome feature. You don't have to buy an extension from Google, but you also get its features as part of the Xiaomi Mi TV Stick features.

With a linked Google Account, you can mirror data from your smartphone directly on your TV or monitor screen. It is a popular and useful function which in our case reacted very quickly and we praise the manufacturer for it.

As for the software, the Android TV operating system is available in version 9.0, which is regularly updated and Google certainly does not forget about this system. My TV Stick even receives security updates. 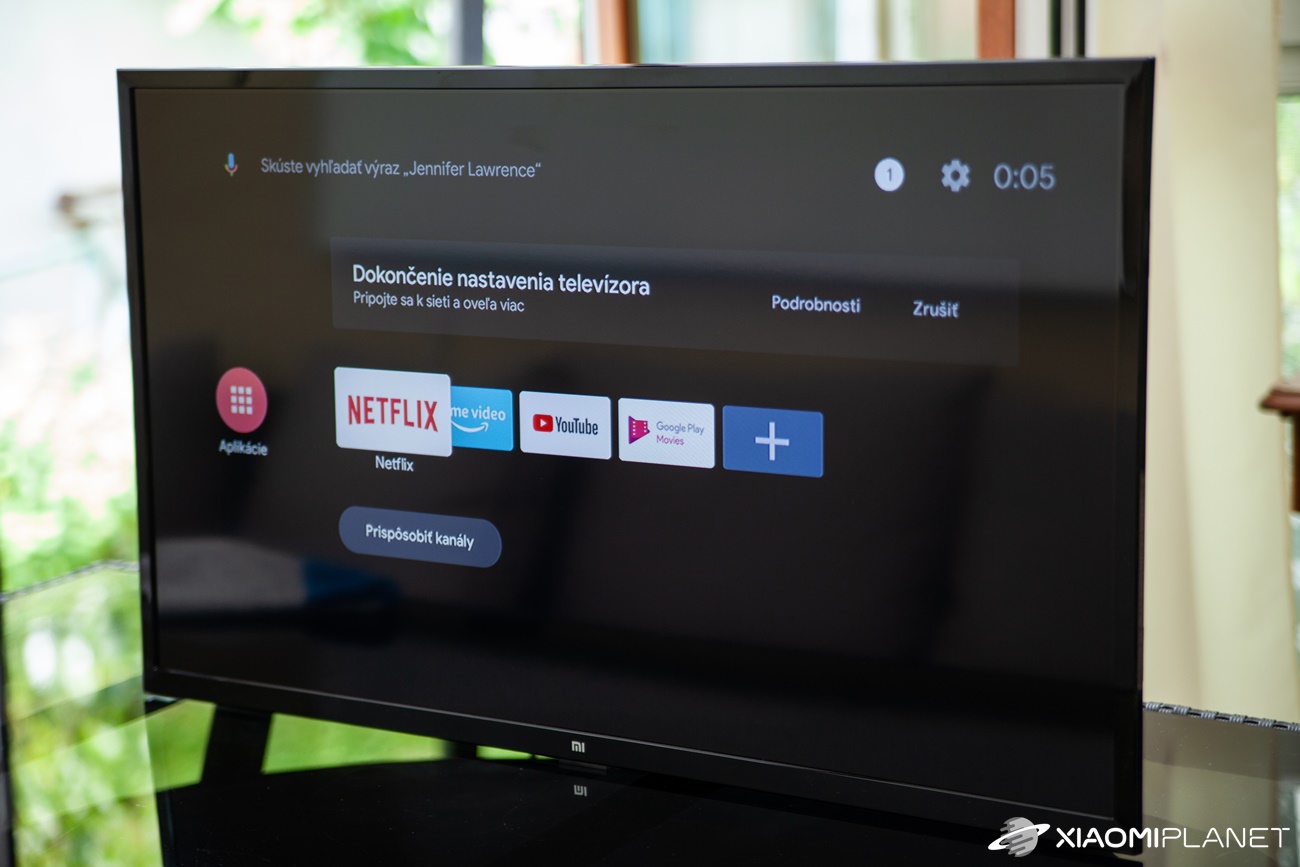 Setting up the system is really very easy from the first power on. The steps, including adding a Google Account, are very similar to an Android smartphone, and if you've ever set up your phone, there won't be a problem with this device. The whole process of setting up and connecting to a Wi-Fi network took us only a few minutes.

In this case, the home screen, like a smartphone, shows icons of available services. However, they are dynamic and it is possible to adjust, sort, etc. Some applications then also offer a local form of widgets, such as a tile with a recognized movie stopped at the appropriate time, with the option to resume playback.

Apps and individual services or even games can be found in the Play Store. This is very similar to the smartphone version again, but contains much less applications. However, those that are available are optimized for the Android TV system and thus their display and control is adapted to the TV or. to the appropriate remote control from Xiaomi. 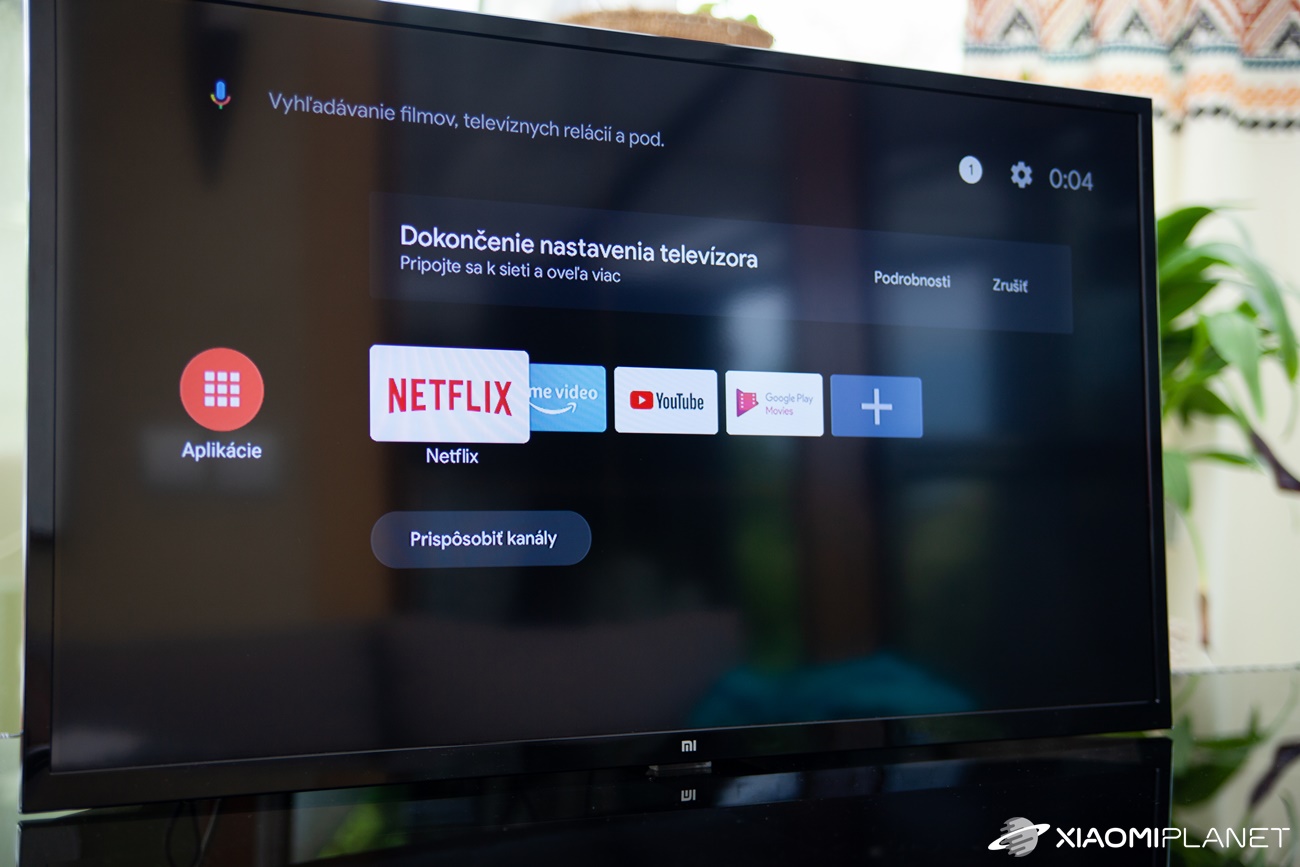 In the application store you can find a number of popular services such as Facebook Watch, Netflix, HBO GO, YouTube, Amazon Prime, but also Spotify, Tune In or local Mall TV resp. Magic GO. Everyone can choose, and even if it seems small to you, you can also install a web browser and view web pages via the driver.

The system responded relatively quickly to our responses and playback of individual services, the only slowdown we noticed when downloading the update. However, this is understandable due to the lower RAM capacity.

Xiaomi Mi TV Stick is a very practical and affordable extension for monitors and older televisions. It will give these devices a benefit in the form of Android TV and smart features.

If you need to play 1080p video, this product is really very suitable. If you require up to 4K resolution, you need to pay extra for a more expensive alternative in the form Xiaomi Mi TV Box S. However, you will buy in the given price category My TV Stick we definitely recommend. 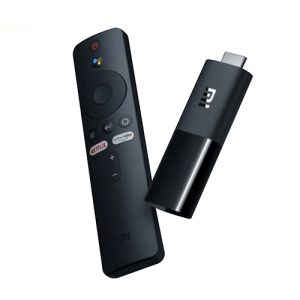 Xiaomi Mijia Thermostat Pro is a new inflated smart kettle with display and application. We have the first coupon

Don't the new Super Wallpapers work in MIUI 12? This is a list of supported smartphones