The Chinese company Xiaomi also offers stylish and cheap Bluetooth headphones in its portfolio. The latest ones come with a label Xiaomi Mi True Wireless Earphones 2 Basic. The headphones offer a matte white plastic case with a magnetic connector and a universal USB type C connector.

In the editorial office, we decided to test these "true-wireless" Bluetooth headphones so that we could evaluate for ourselves what equipment it actually offers. This is their review.

Relatively light controversy can arise regarding the purchase of this device. The headphones are also sold in their Chinese version with the designation Xiaomi Mi Air 2 SE and are structurally practically identical. However, we tested the global version, which is officially sold in Slovakia.

You will find our global version of the headphones in the offer of local Slovak / Czech, but also international dealers with the designation Xiaomi Mi True Wireless Earphones 2 Basic. We purchased them for the editorial office via the Datacomp.sk e-shop and delivery by courier took 3-4 working days.

However, if you want to save some euros, you can also find headphones on Aliexpresse, both in Chinese and in the global version. When available in a European warehouse, it can be yours in as little as 3-7 working days, and when imported from China, it can be in 15-20 working days.

Packaging: A traditional classic from Xiaomi

Xiaomi brings these headphones in its global version with the label Mi True Wireless Earphones 2 Basic in a compact box, in a blue-white color combination. This smaller box offers an image and product name, as well as selected technical specifications. 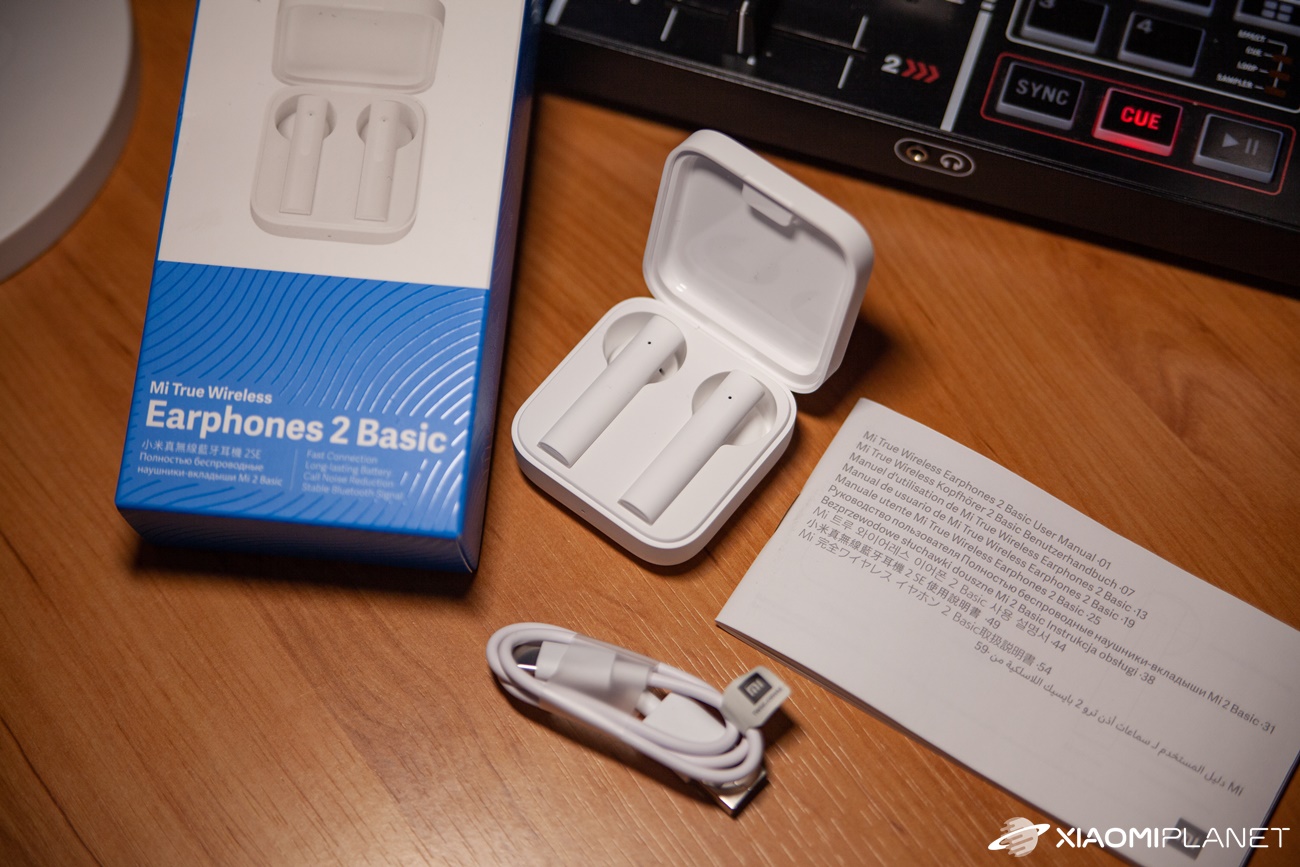 After unpacking, a paper box is hidden in the box, and it also contains the headphones themselves or the charging box wrapped in a protective foil. In addition, the package also includes a brief paper manual in English and a cable with a USB type C connector for charging. 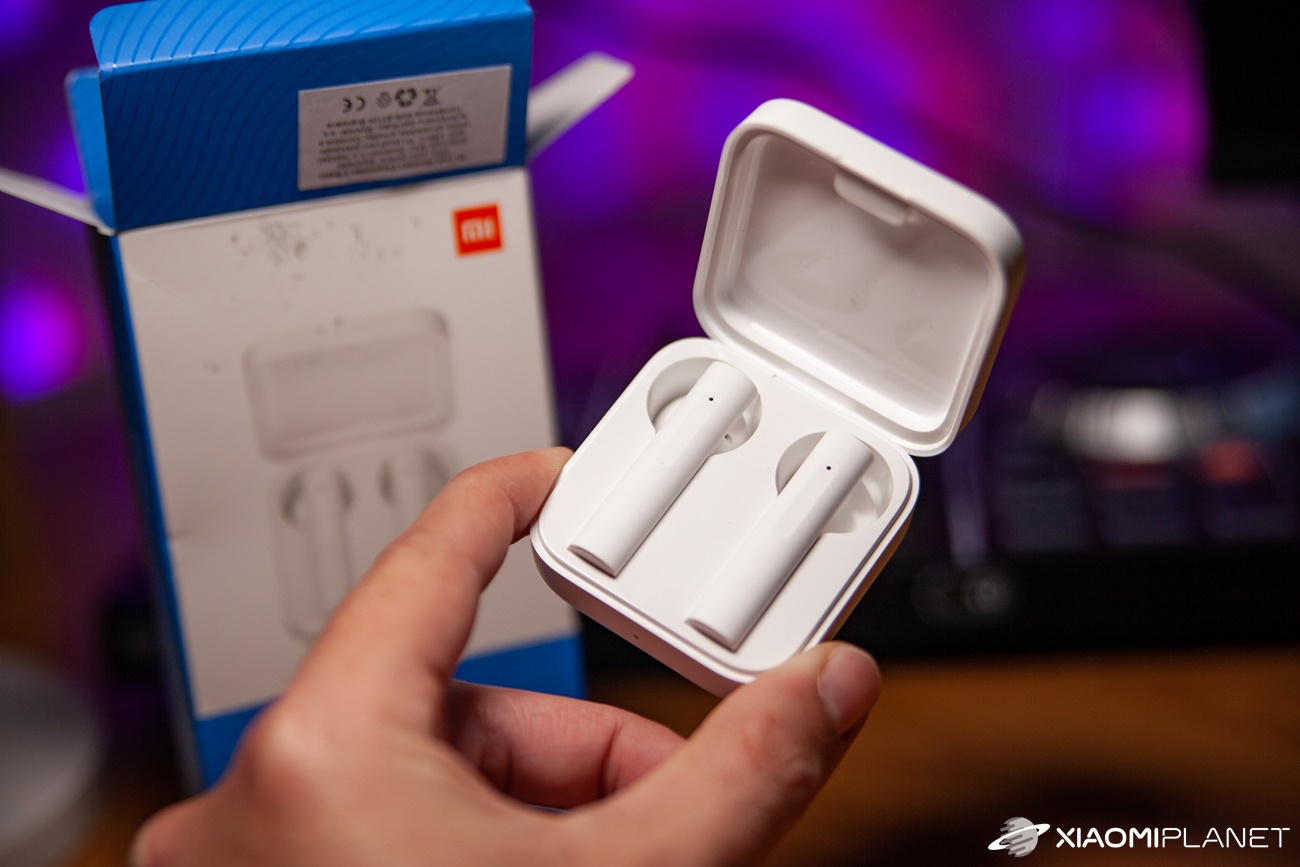 Paradoxically, when the box is opened, the inside contains a glossy finish. The box contains a quality hinge and with a certain dose of dexterity it is also possible to open it with one hand. The corresponding connectors then contain the headphones themselves.

The shape of the headphones is of the "dice" type, which certainly may not suit everyone. Their location is well known, the headphones are practically hung on the ear and held by their weight in the appropriate ear space. We haven't noticed any problems with wearing them, but the problem can occur with users who have smaller ears. 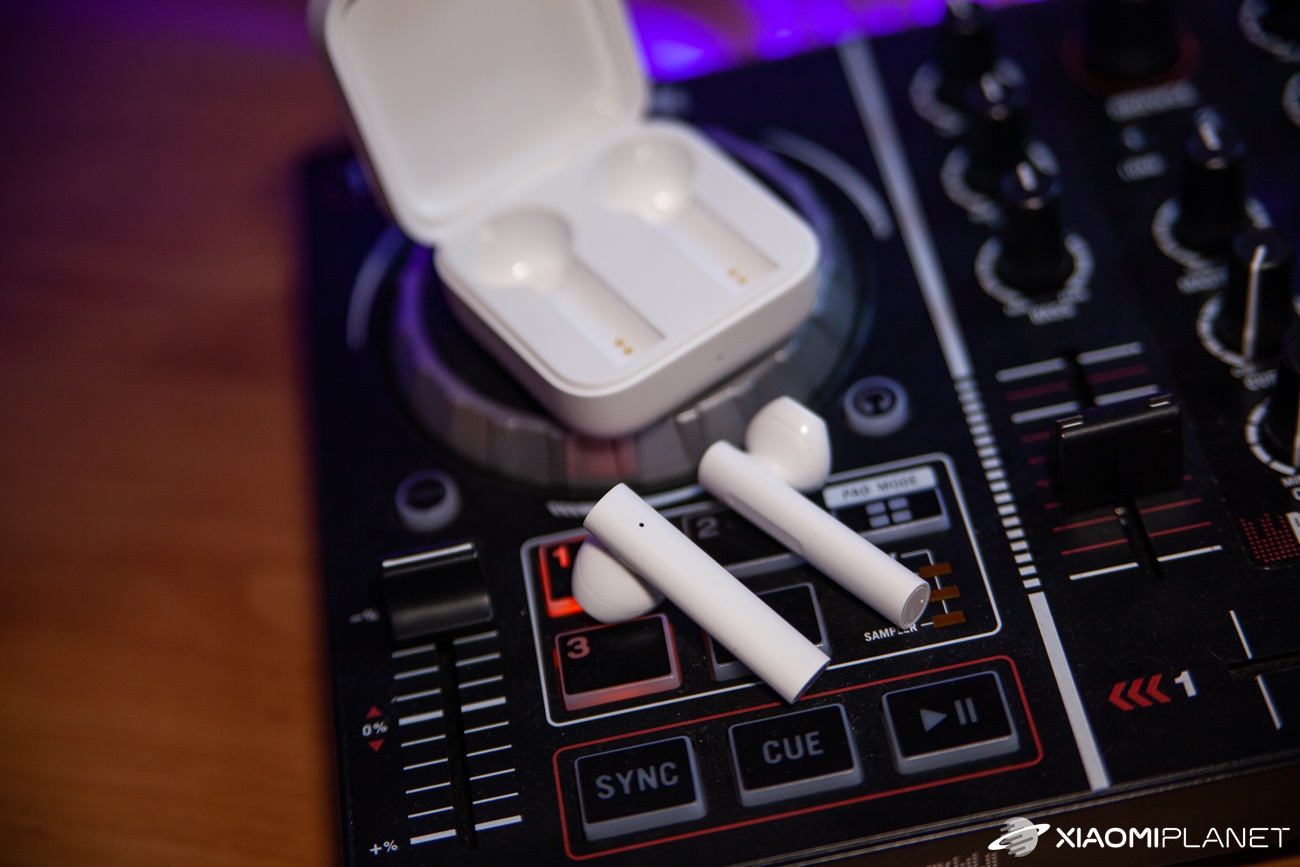 Compared to competitive and more expensive models, these headphones are coarser, larger and more powerful. Nevertheless, they are relatively light (only 4,7 grams) and do not unnecessarily burden the ear even when worn for a long time for several hours.

At first glance, it is interesting to open the box in which the headphones are located. It has a hinge on the back and opens very similarly to a cosmetic mirror, from bottom to top. 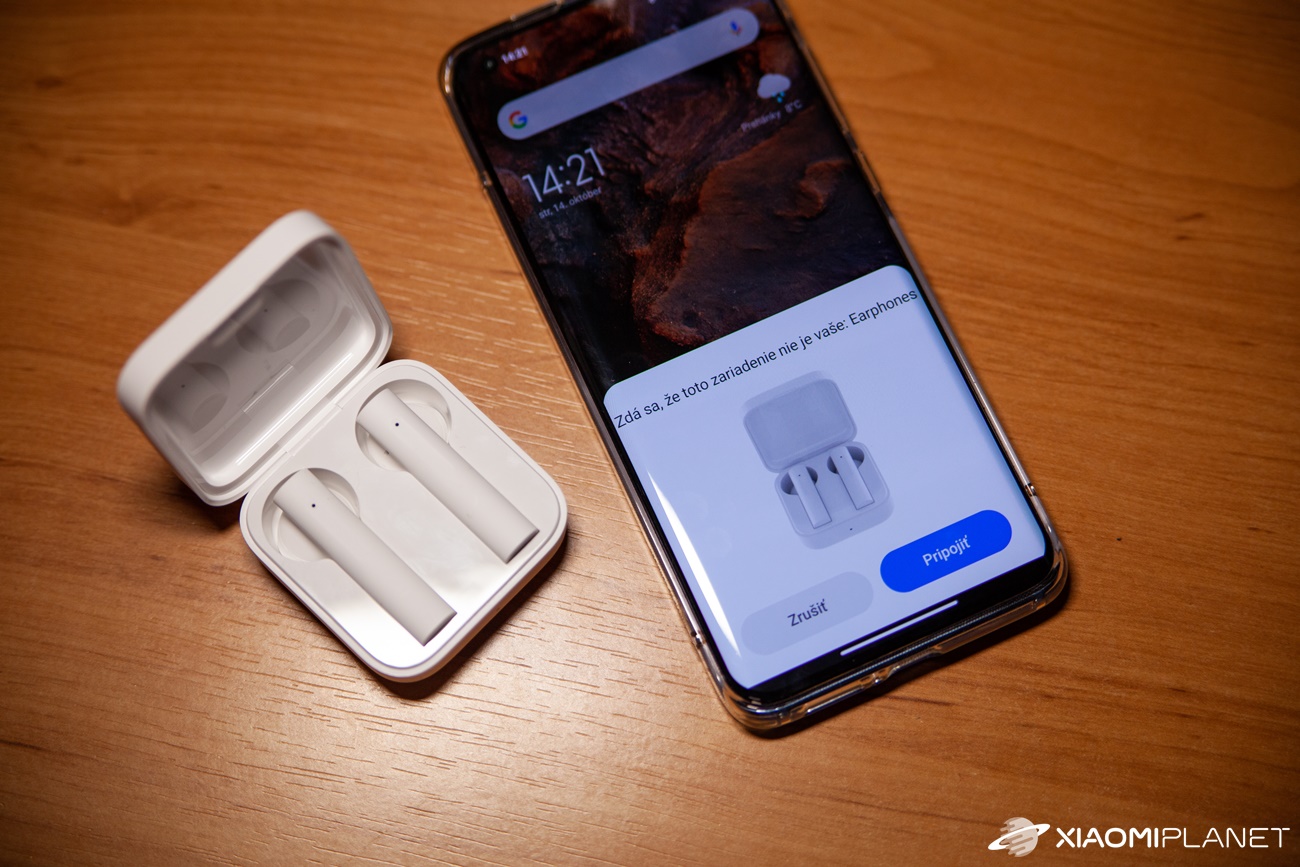 Although the box is made of matt white plastic, we can see some product information and mandatory recycling information on the bottom. The front side in its lower half contains an LED diode signaling charging and also a cut-out part to simplify opening.

On the back of the box there is a modern and universal USB type C connector for charging. After opening the box, we can see the shiny design and four pins that charge the headphones themselves. The headphones are placed separately outside the box in the original packaging. 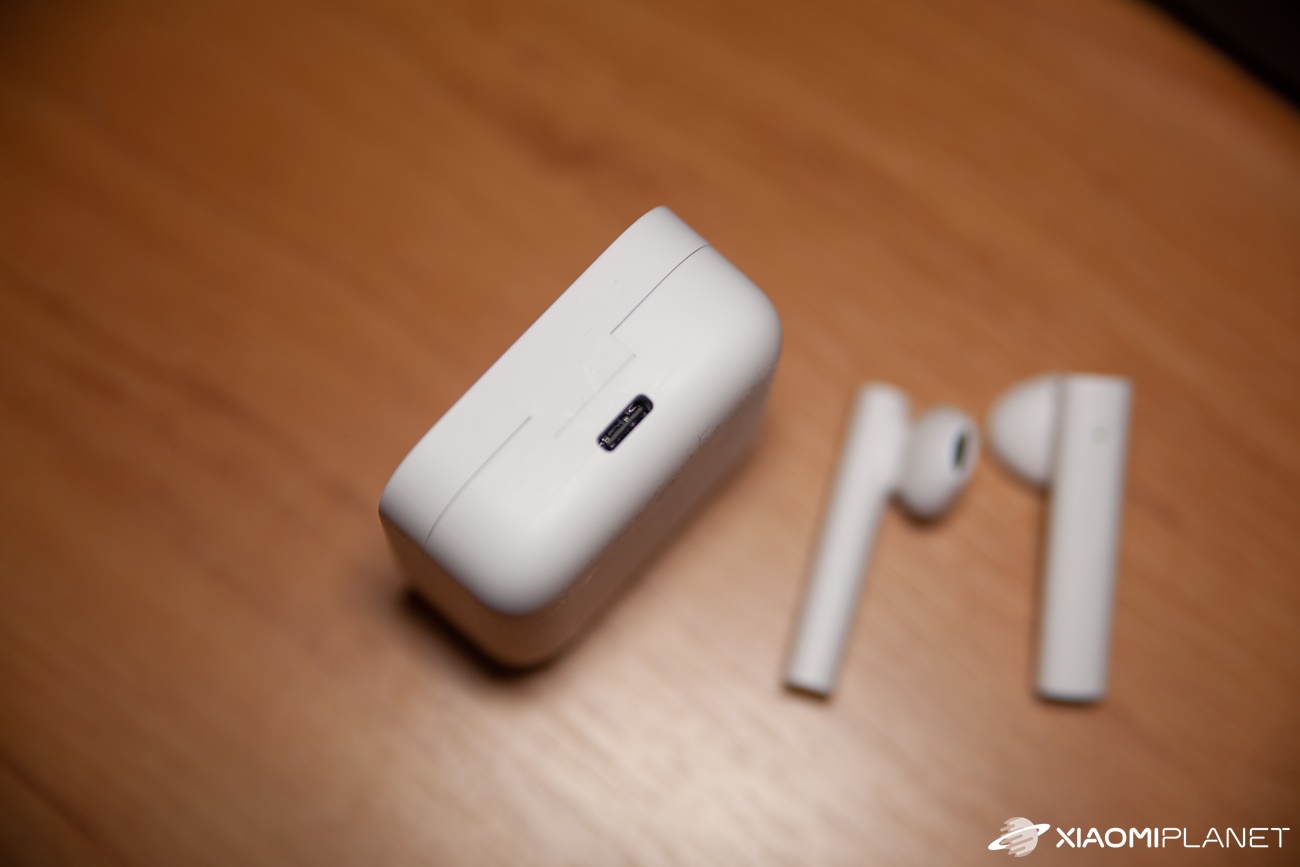 On the body of the headphones we can see not only a pair of microphones and a pair of pins for charging in the box, but also a sensor that detects the removal from the ear and insertion into the ear. This will pause and resume playing music from the speakers.

The sticks sticking out of the user's ear are relatively thick and may look a little funny on some, especially smaller ears. However, the construction is solid, it also has an LED diode signaling the connection and suspension of the so-called the bones in the ear do not interfere. The touch surfaces on the sides of the handset also help control.

In terms of connectivity, these headphones are doing very well, also due to their low price. A USB type C connector (cable included) is used for charging, and Bluetooth 5.0 technology with a range of approximately 10 meters is available for wireless connection to a smartphone.

For the first connection, it is practically necessary to just insert the headphones and take them out of the box. Their connection via the smartphone settings is then very simple. Due to the Bluetooth technology used, reconnection is also very fast.

Due to the true-wireless design of the headphones, support for the SBC and AAC codecs will also please. The great news is also the integration of voice intelligent assistants XiaoAI, Google Assistant, Alexa, but also Siri. After initial activation by gesture, it is possible to enter voice commands directly through the headset. 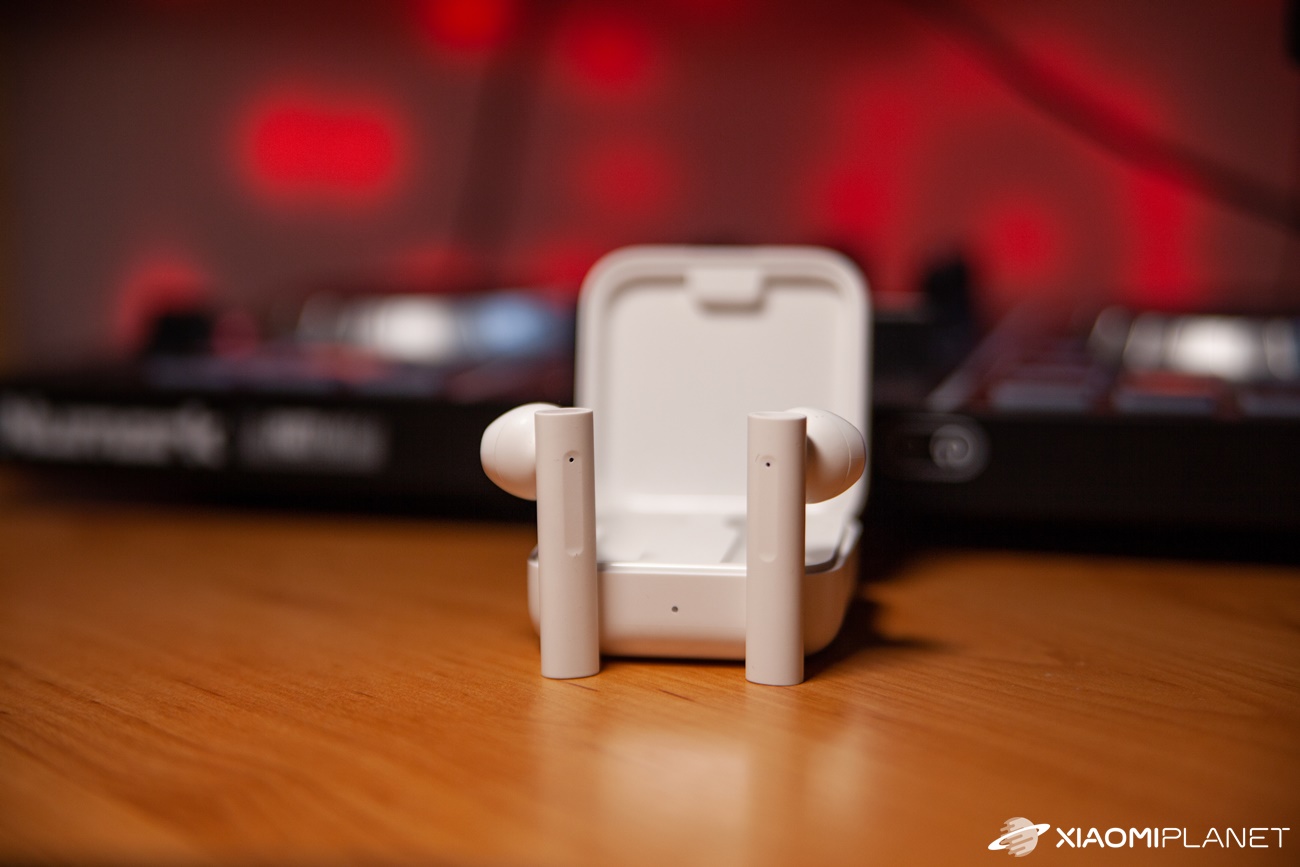 Equipped with headphones Xiaomi Mi True Wireless Earphones 2 Basic there are 14,2 mm converters and a DSP chip (Digital Signal Processing - modeled after Redmi Airdots S), which ensures the quality of the output. The impedance stopped at 32 Ohms and binaural playback with minimal delay for video playback or gaming is also a very good feature.

In our case, we really praised the use of headphones. They offer clear and high-quality sound without unnecessary noise, even at 90% of the volume. There is also a distinctive bass component for listening to modern pop and rap music or suitable mids and highs.

It is true that headphones are worse in terms of ambient noise, but this is more due to their design. When listening to music outdoors, the ratio of music to ambient noise is approximately 80:20. However, we must also praise the quality of the microphones, the call over the phone was understandable.

The design of the headphones themselves offers a touch surface for various gestures on its side. By touching these areas, it is possible to pause and resume music playback, start binaural playback, but also pick up a call or activate the intelligent assistant. 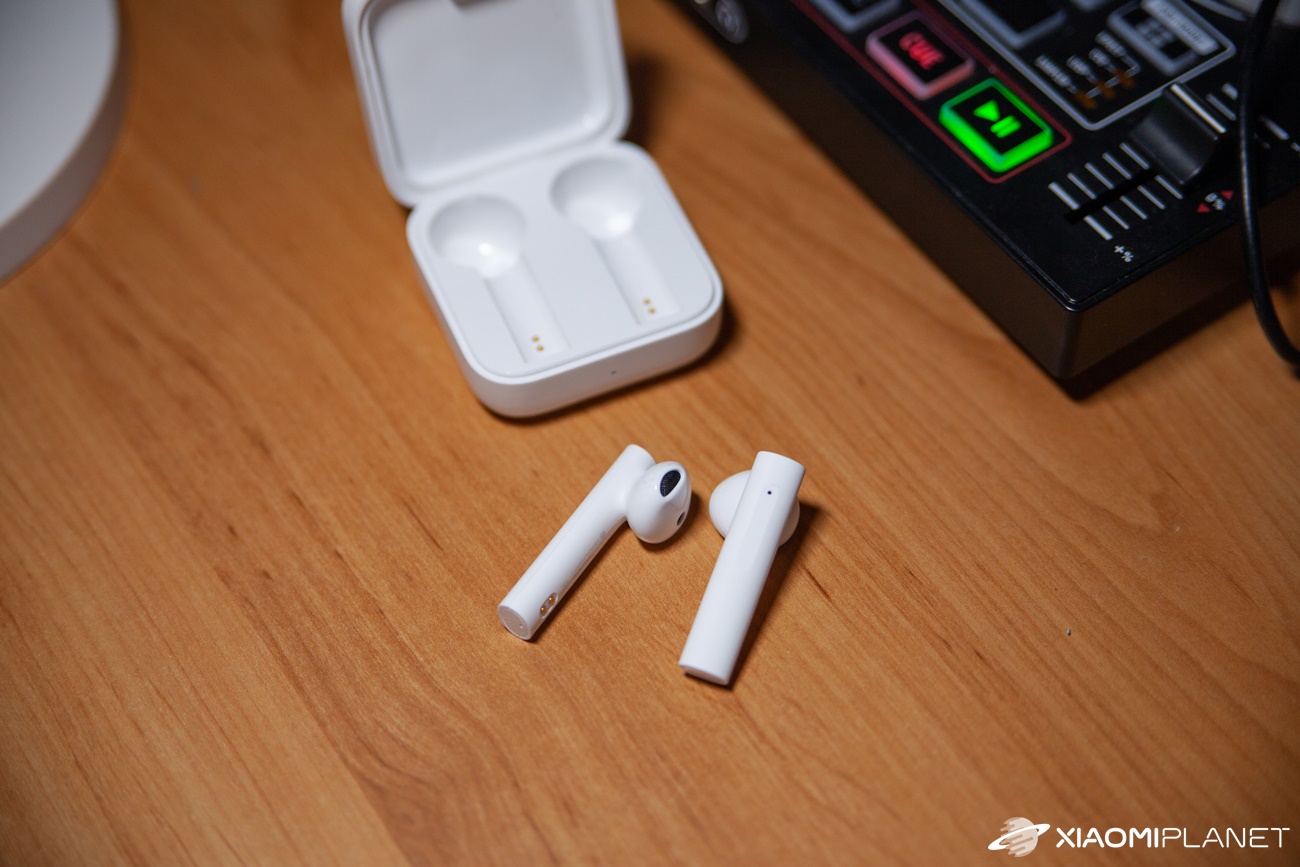 We most often used the gesture to pause (by touching the right handset) and also to activate the intelligent assistant Alex (double touch of the left handset). Dual microphone technology ensures easy and accurate command input using an intelligent assistant, such as turning on a light or setting an alarm.

We also used an assistant from Google for testing, and its operation was similar and accurate. It is also very good and functional to remove the handset to pause playback and resume it after insertion. This function also worked accurately and without problems.

As far as endurance per charge is concerned, the manufacturer states paper values ​​of 5 resp. 20 hours as the endurance of the headphones themselves without the box resp. with charging in a box. This is definitely not a bad value, especially for such cheap models.

Our testing showed a lower endurance of the headphones themselves, which ranged from 4 to 4,5 hours per charge. However, after practical and continuous charging in the box, the resulting endurance was extended to 22 hours, which is more than stated by the manufacturer.

We were satisfied with the endurance in combined use and we charged the box via a type C USB cable about once a week. With 1A charging, the box with the headphones is charged in about 90 minutes, which is according to the manufacturer's instructions.

The global version of the headphones with the label Xiaomi Mi True Wireless Earphones 2 Basic you will also find Slovak and Czech e-shops. Their price ranges from approximately € 31,90 / USD.

However, if you want to save some euros, you can also choose the Chinese version of the headphones, which is even cheaper and marked Xiaomi Mi Air 2 SE sells for about 20 € / USD.

A bonus is the universal USB type C connector, which is now found in almost every high-end smartphone. Despite the controversial design, we recommend the purchase of these dice-shaped headphones, of the "true-wireless" type, especially for those users who are hindered by the traditional silicone construction.

Xiaomi has a brand Mijia also high quality pens. They are available in the Czech warehouse at coupon prices

Xiaomi and the Friend Only brand have a quality thermos with a volume of 1000 ml, which maintains the temperature for up to 24 hours