Monitoring of the menstrual cycle

Does not contain NFC

Worse endurance on a single charge

Spoločnosť Xiaomi has introduced a new generation of its fitness bracelet not only in Chinese, but also in a global version. It has a label Xiaomi Mi Smart Band 5 and brings several hardware as well as software improvements.

This is a successful improvement over the popular one Xiaomi Mi Band 4? The beginning of the review will answer this question.

Fitness bracelet Xiaomi Mi Smart Band 5 we pre-ordered directly from the Slovak official distribution. Through the e-shop Alza.sk the product was delivered to our local branch in two calendar days. However, the official distribution required a higher amount, which stopped at € 55,90.

If you want to save some extra euro, you can have it significantly cheaper Mi Smart Band 5 when using one of our discount coupons. In addition to the advantageous price, you will also receive transport to your home completely free of charge.

When it comes to packaging a new product, it is practically identical to the previous generation. In this case, however, the number “5” is already on the front of the compact box. 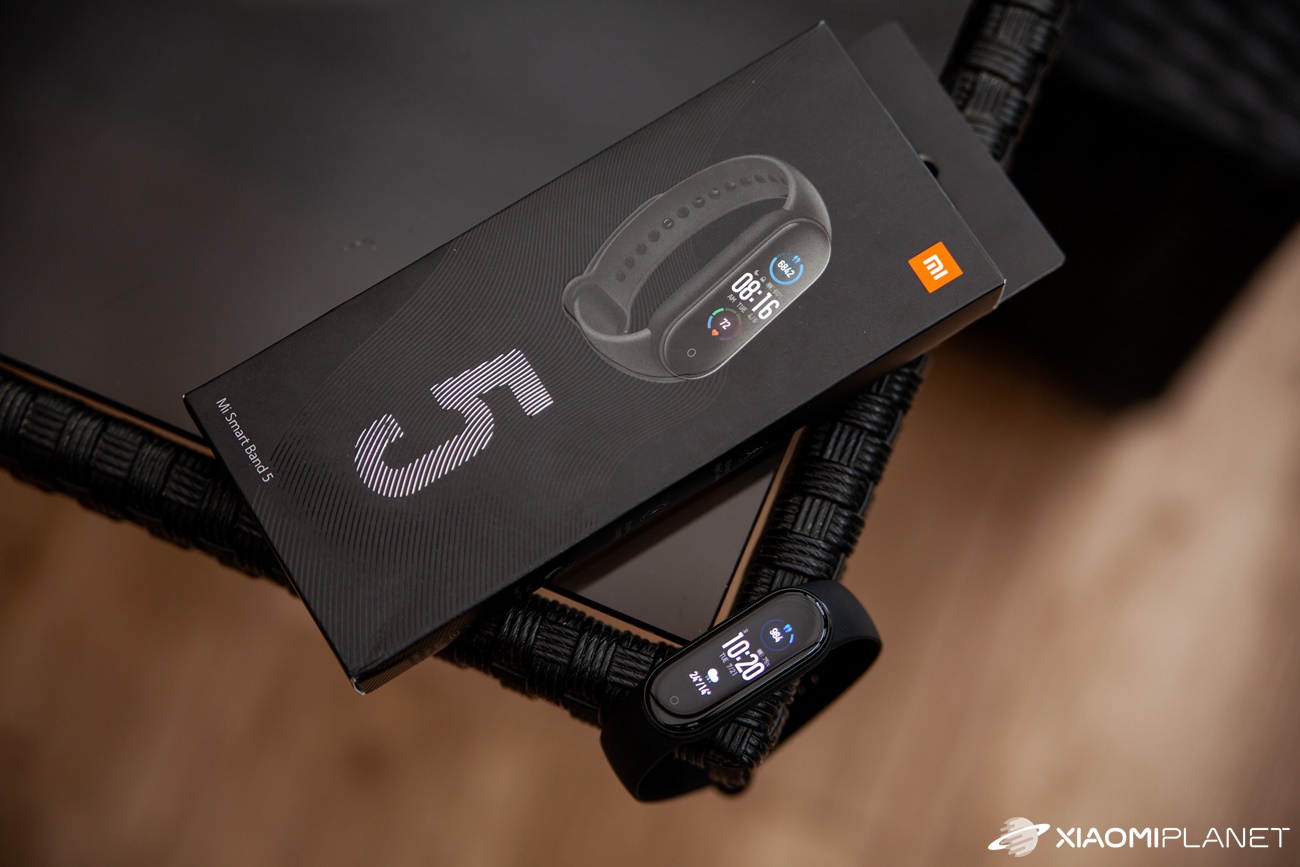 After unpacking, there is a new charger with a magnetic connector on the top itself. This is one of the main improvements of the fifth generation fitness bracelet. Below is the Xiaomi Mi Smart Band 5 bracelet itself with a black silicone strap. 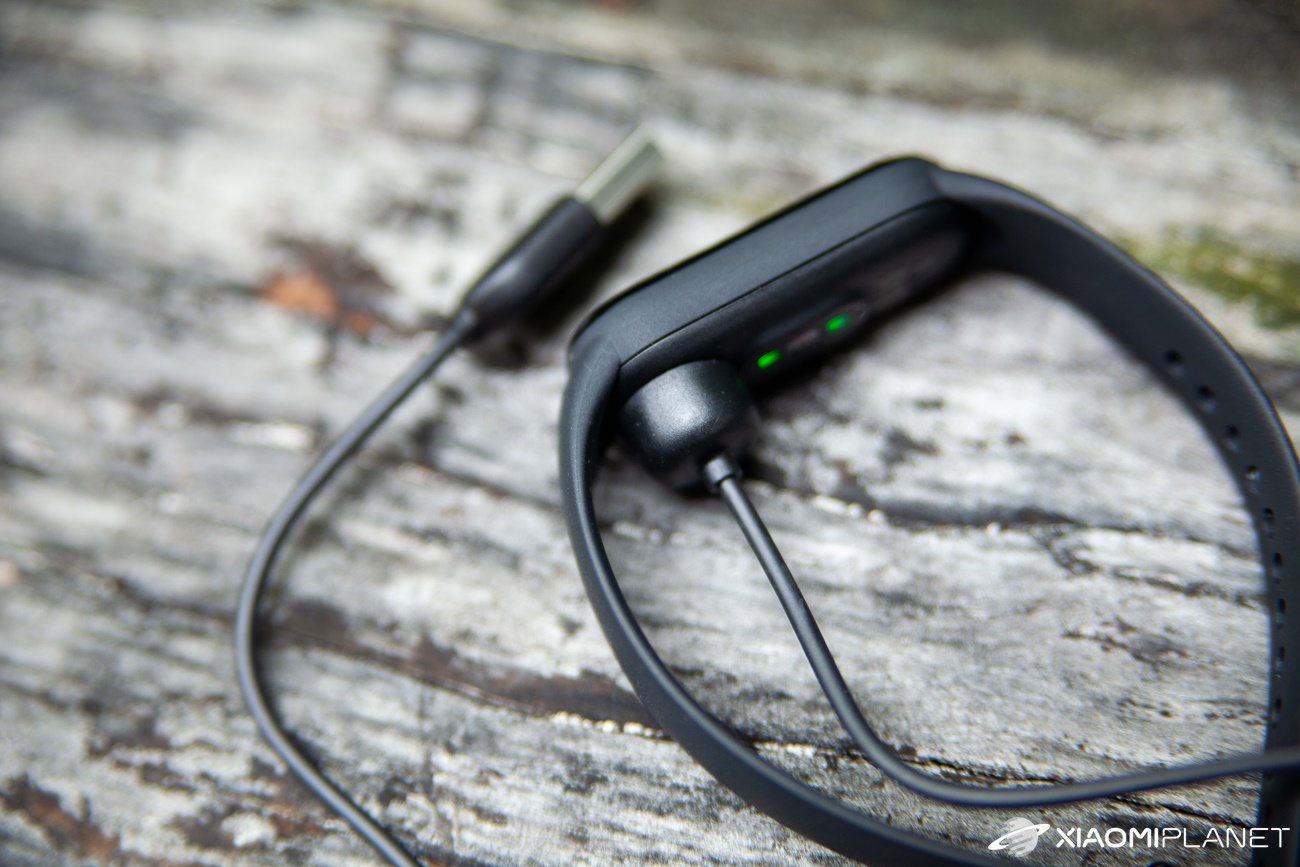 The package now contains only paper manuals and no big surprise is happening at this moment. On the other hand, due to the price of the device, it is a simple and functional package, which is nothing to blame.

The weight of the novelty has stopped at a pleasant value of only 23 grams, so there is a high probability that you will not even feel the bracelet on your hand. The maximum length of the supplied silicone strap (it can be replaced) is 18,5 cm. 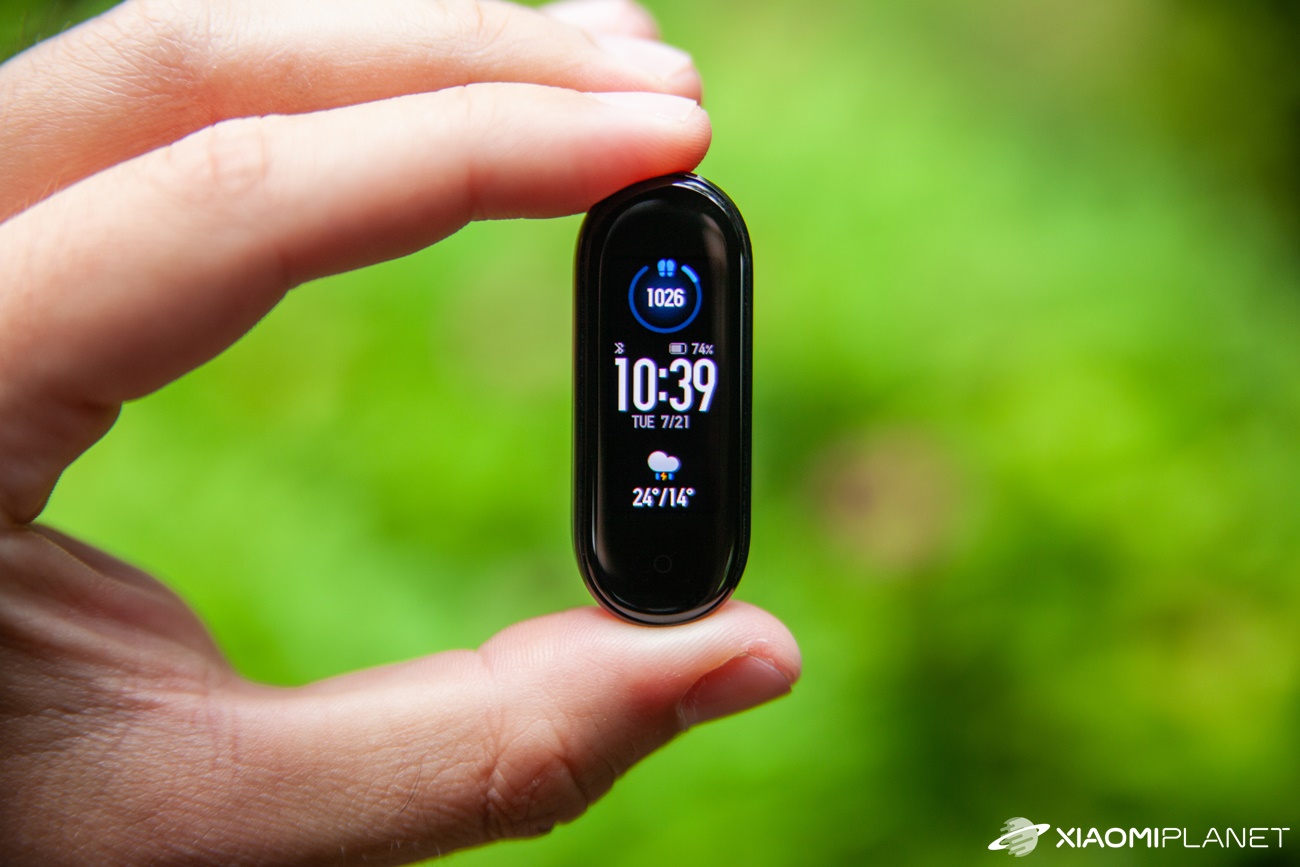 Core resp. the body of the device again consists of a plastic capsule, which has a larger and finer AMOLED display on its upper side. The bottom side is again home to this time improved sensor for measuring heart rate and there is also a magnetic connector for charging.

When charging, it is no longer necessary to remove the capsule from the strap itself, which can prolong its life. Straps from previous versions of Mi Band 3/4 are not compatible. When used, the watch will lock in place, but it will not fit completely like the new strap for the Mi Band 5.

Global disappoints with the absence of some features

As Xiaomi is already very well known, it brings us several types of products in a different Chinese and subsequently a global version. This is also intended for us European customers. The new fitness bracelet is no exception. 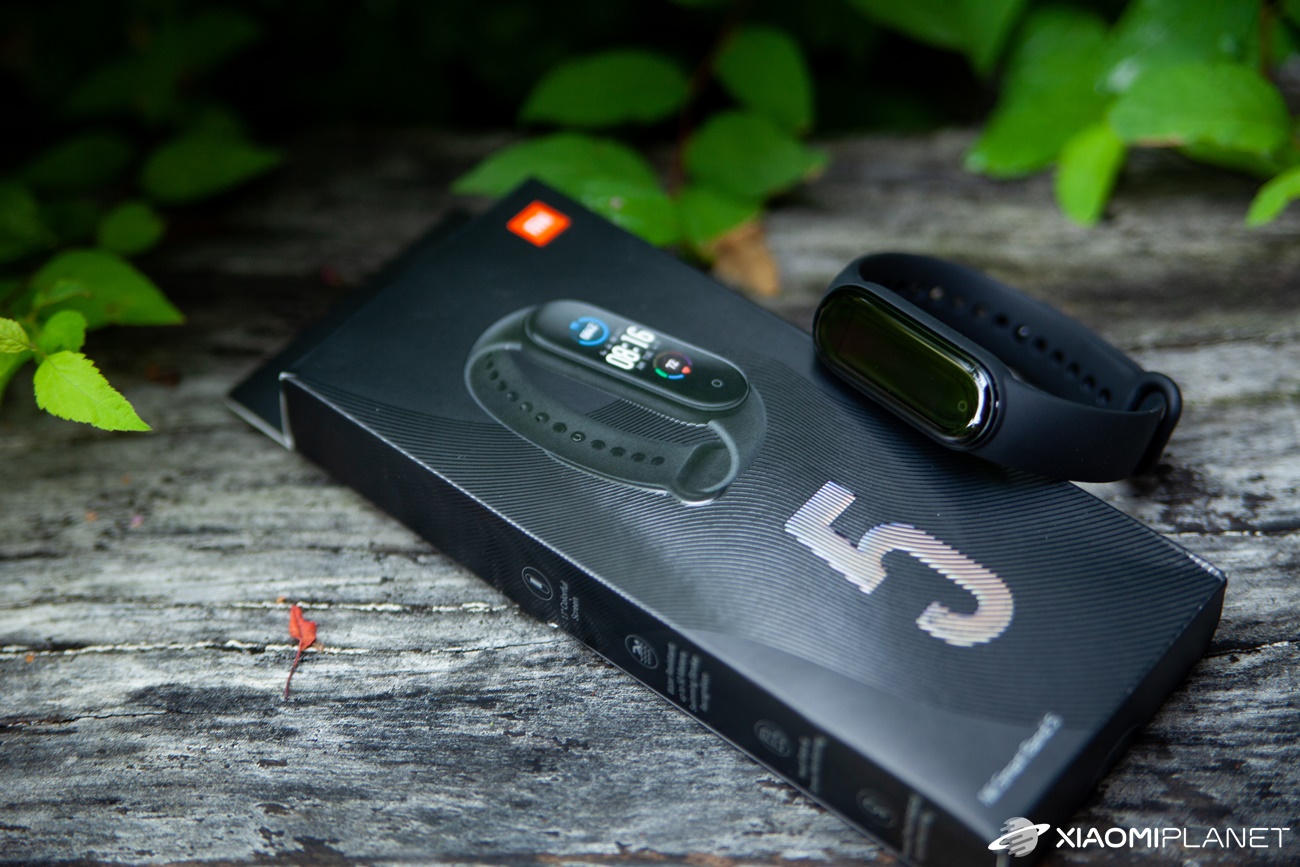 The global version is called Mi Smart Band 5 and the above-mentioned functions such as NFC or SpO2 monitoring are absent. The application initially offers 65 dials, but the manufacturer promises to add an update.

However, let's move on to the features and functions that both versions have the same. Let's start with a very important element, which is the display. It offers a diagonal of up to 1,1 ”(an increase from 0,95” on the Mi Band 4) and is also finer. Specifically, it has a resolution of 126 x 294 pixels. 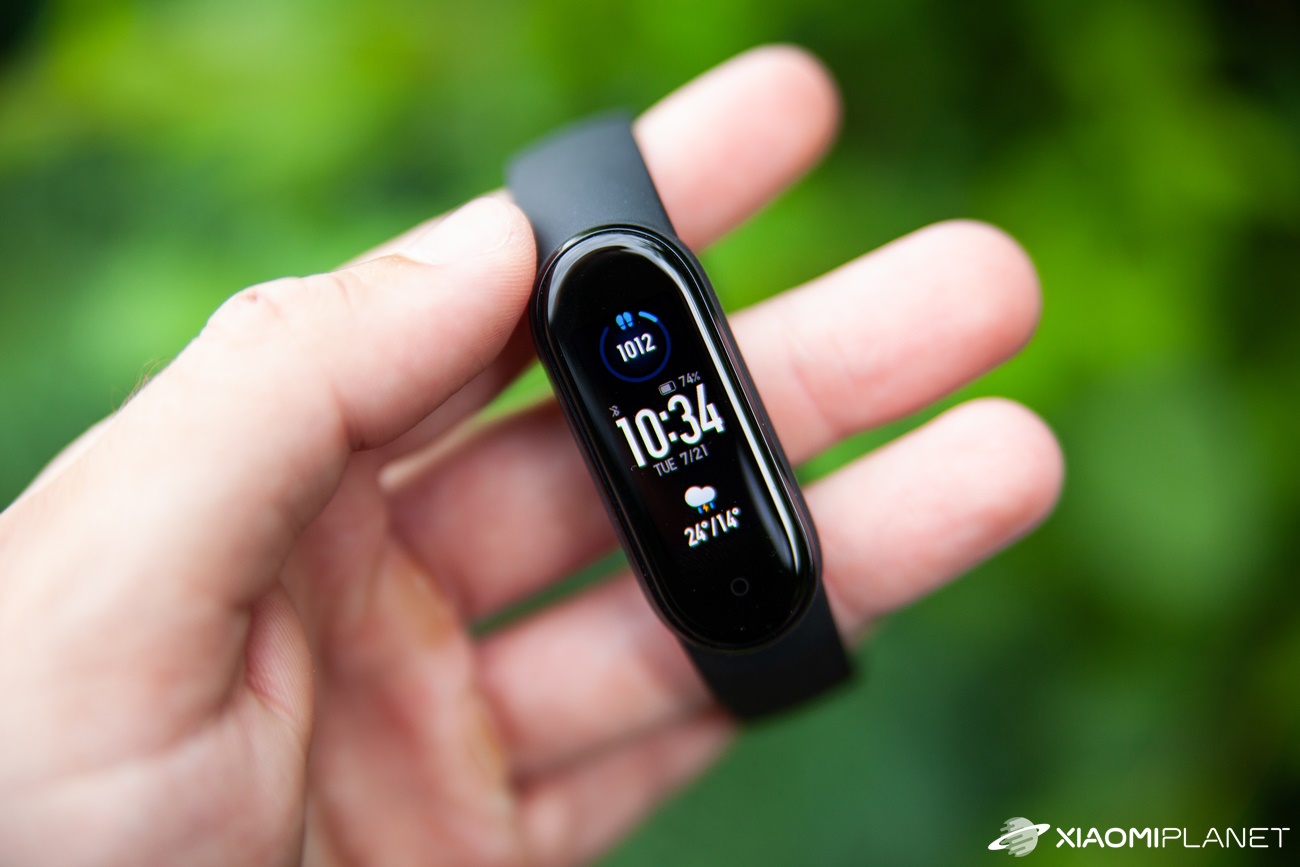 The display is covered with a curved and unspecified 2,5 protective glass and the corners of the display itself are also slightly rounded. The user will notice this especially when using the color dial. Thanks to the larger diagonal, the dials offer more information.

From the factory, the watch offers a brightness set at level 3 out of five. We recommend using the maximum value of brightness in direct sunlight in the exterior, and the lowest value in the interior and in the dark. The brightness is very good (up to 450 rivets) and the readability of the basic screen was not a problem. 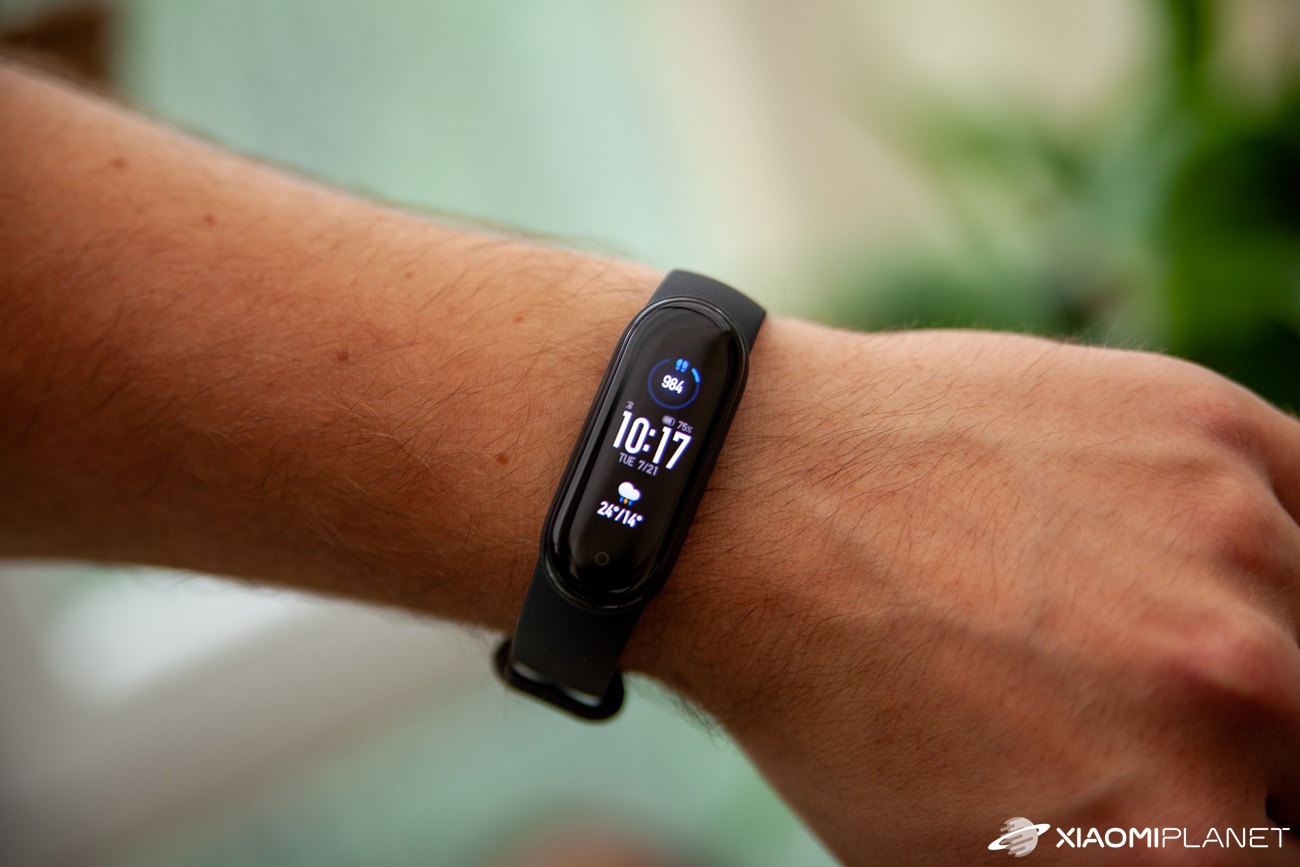 Some sources reported a slight scratch on the display. We did not notice any damage during testing. The increased fineness of the display was reflected in the notifications, which are richer resp. display more text. However, pay attention to the diacritics, it contains a different font, which is smaller, so at first you will have to solve it a bit.

The fitness bracelet is connected to a smartphone via Bluetooth 5.0 BLE technology and you can make all the necessary settings following the example of your predecessors via the well-known Mi Fit application. Pairing a bracelet is really easy, just log in and then approach the bracelet with your smartphone.

The application is very good and compared to previous years, it has also undergone several design changes. The bracelet even received an update after the first setup. The application offers a wide range of customization options, including trade with dozens of dials. The application environment reacted quickly and there was no problem with the connectivity of the bracelet.

We've also seen improvements in terms of monitoring features. The fifth generation offers a completely new sensor for heart rate monitoring. It can monitor the results virtually without a break, but this results in reduced endurance per charge.

All-day sleep monitoring is consequently also a novelty compared to Mi Band 4. In addition, monitoring works in less deep REM sleep and the overall monitoring results should be more objective.

The manufacturer has also added the PAI (Personal Activity Intelligence) functionality, in which it is possible to obtain points for your activity, and even in this case there is a goal setting that must be met in a week or in a month. This feature is very similar to the popular rings on the Apple Watch or. points in Google Fit.

When it comes to monitoring sports activities, compared to the six sports in the previous generation, the Mi Smart Band 5 offers up to 11 self-recognized sports. Namely, sports like plays, elliptical trainer, rowing machine, skipping rope a stationary bicycle. "Indoor" activities are a welcome plus in the quarantine period.

All sports can be recognized automatically, thanks to built-in sensors such as a three-axis accelerometer and a three-axis gyroscope. Monitoring functions are the main genefite of this bracelet. The start of the activity is fast and without waiting, but the bracelet does not contain GPS. It draws this data directly from the connected smartphone.

A positive improvement is also the measurement of stress and warning of high levels of stress. In this case, breathing exercises are also available that the bracelet can recommend. A well-known feature is also the idle alert, which is also available.

A significant improvement over previous generations is also the monitoring of the menstrual cycle, which will be appreciated by the gentler halves. We also tested this feature, which initially needs to be enabled in the Mi Fit app itself. It will request the initial data before the built-in algorithm starts the monitoring itself.

After enabling the function in the application, it is necessary to fill in some primary data such as the length of menstruation, the length of the cycle and the beginning of the last menstruation. It is advisable to enter average data so that the algorithm calculates the forecast correctly. There is also a forecast off, in which case only manual data entry would be available.

Subsequently, the application will offer a calendar with color-highlighted data on menstruation, but there are also data on the expected time of menstruation, ovulation or fertile days. There is also an up-to-date summary with data for the day and an option to end the cycle.

Other functions include recording of several levels of pain, bleeding, but also the current mood. A practical element is the setting of notifications for events for which he has resp. the bracelet does not respond. Selected functions from the application menu can also be controlled directly on the watch.

The offer of options in the application is in the Slovak language, but sometimes there is a typo or a bad form of the word. These imperfections could be fixed by some of the other software updates.

This is a question that many owners of the previous generation of Mi Band 4 will ask themselves, but also owners of older generations who are currently looking for an affordable and discounted Mi Band 4 bracelet.

The fifth generation differs from the previous one mainly by the larger and finer up to 1,1 ”AMOLED display. According to the manufacturer, the sensor for measuring cardiac activity has been improved by up to 50%. 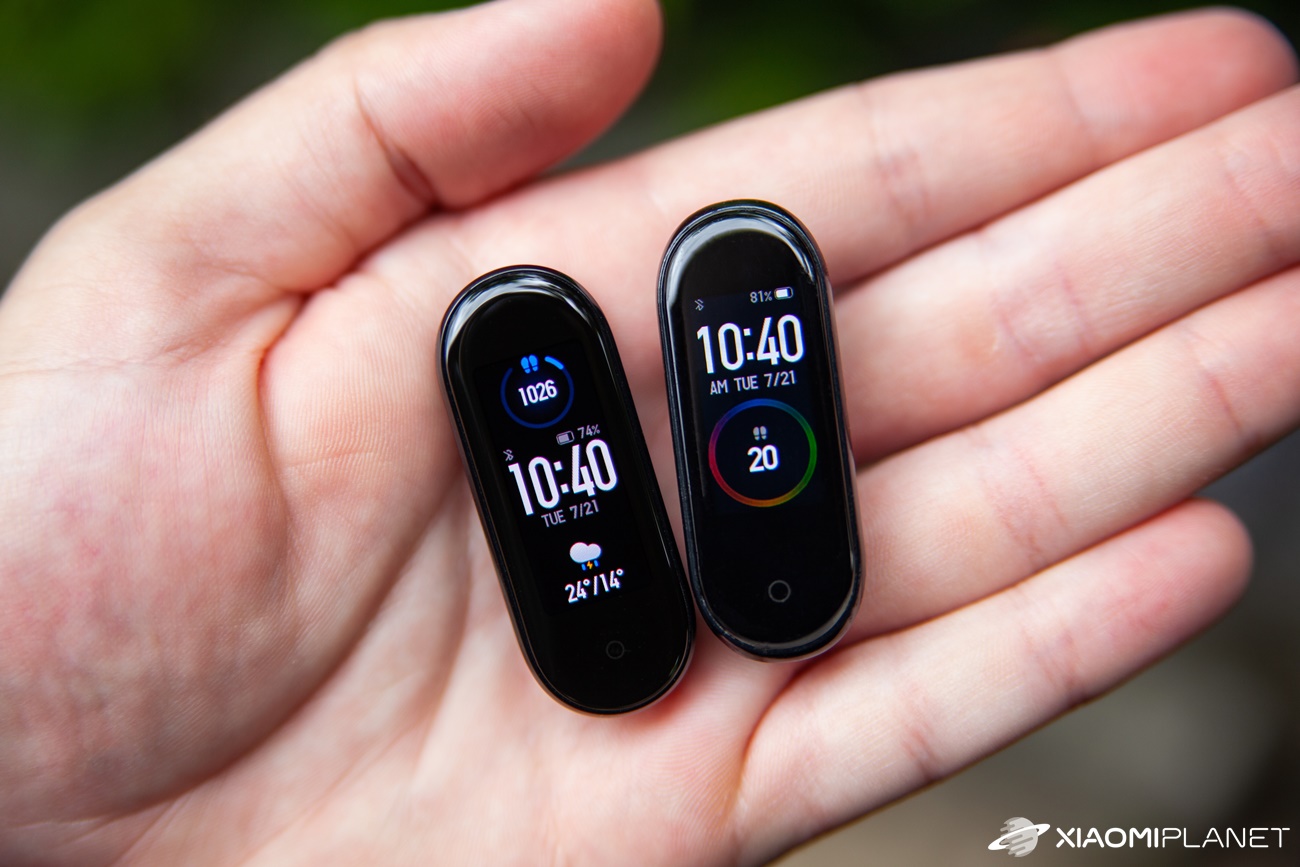 From the other functions, another 5 sports activities were added for monitoring and all with automatic recognition. The gentler halves can be pleased with the menstrual cycle monitoring integrated directly into the popular Mi Fit application.

A practical hardware improvement of the fifth generation is also magnetic charging, which is very useful and thus eliminates the worry of removing the capsule from the strap as in previous generations. From our point of view, updating is definitely worthwhile.

Battery: 14 days on a single charge

According to the manufacturer, the total battery life has dropped to 14 days per charge. The question remains whether this is a low value. Competitive bracelets offer endurance at the level of 5 - 7 days and long endurance is a long-term benefit of Mi Band bracelets. 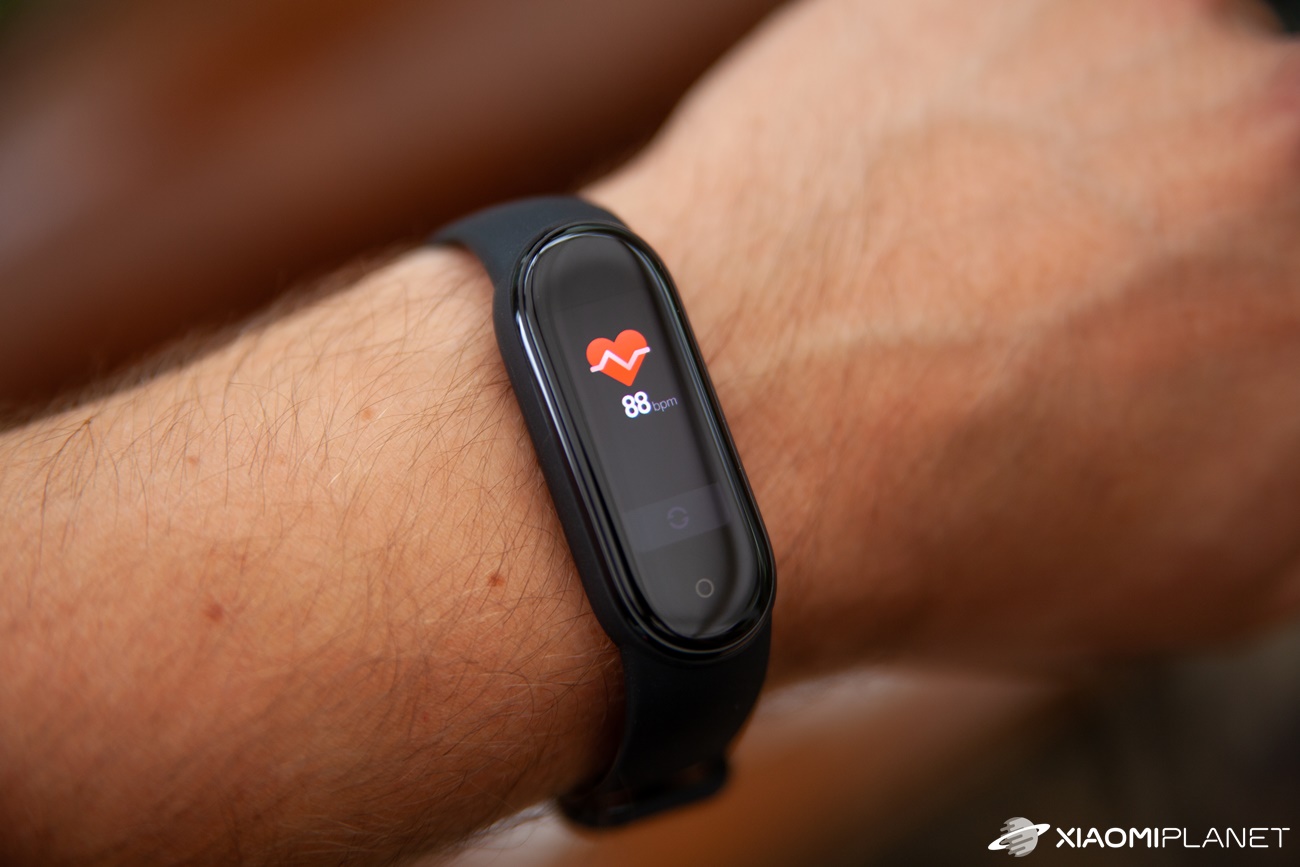 The fifth generation initially disappointed us slightly. For proper testing, we chose demanding use with maximum display brightness, display illumination with the wrist, automatic heart rate measurement (every minute) and a number of notifications.

In such a demanding use, the bracelet was asked about the charger once every 7 days. This relatively low endurance shocked us quite a bit, as it did not even meet the standard set by the manufacturer. However, it was enough to look at the settings in the Mi Fit application and the situation turned for the better almost immediately.

With reduced brightness to 60%, more moderate wrist rotation, setting the value for heart rate measurement to 30 minutes, and diluting the notifications provided, the energy loss was significantly slowed. Such use thus meets the values ​​from the manufacturer.

However, more frequent charging does not interfere so much in practice. The reason is the new magnetic connector for charging, with which charging is really a toy. Just attach it to the watch and it will start charging immediately. There is a Li-Po 125 mAh battery, charged in about 90 minutes.

Quality workmanship, several improvements in terms of display, monitoring functions or charging predetermine the fifth generation of the popular fitness bracelet for success. 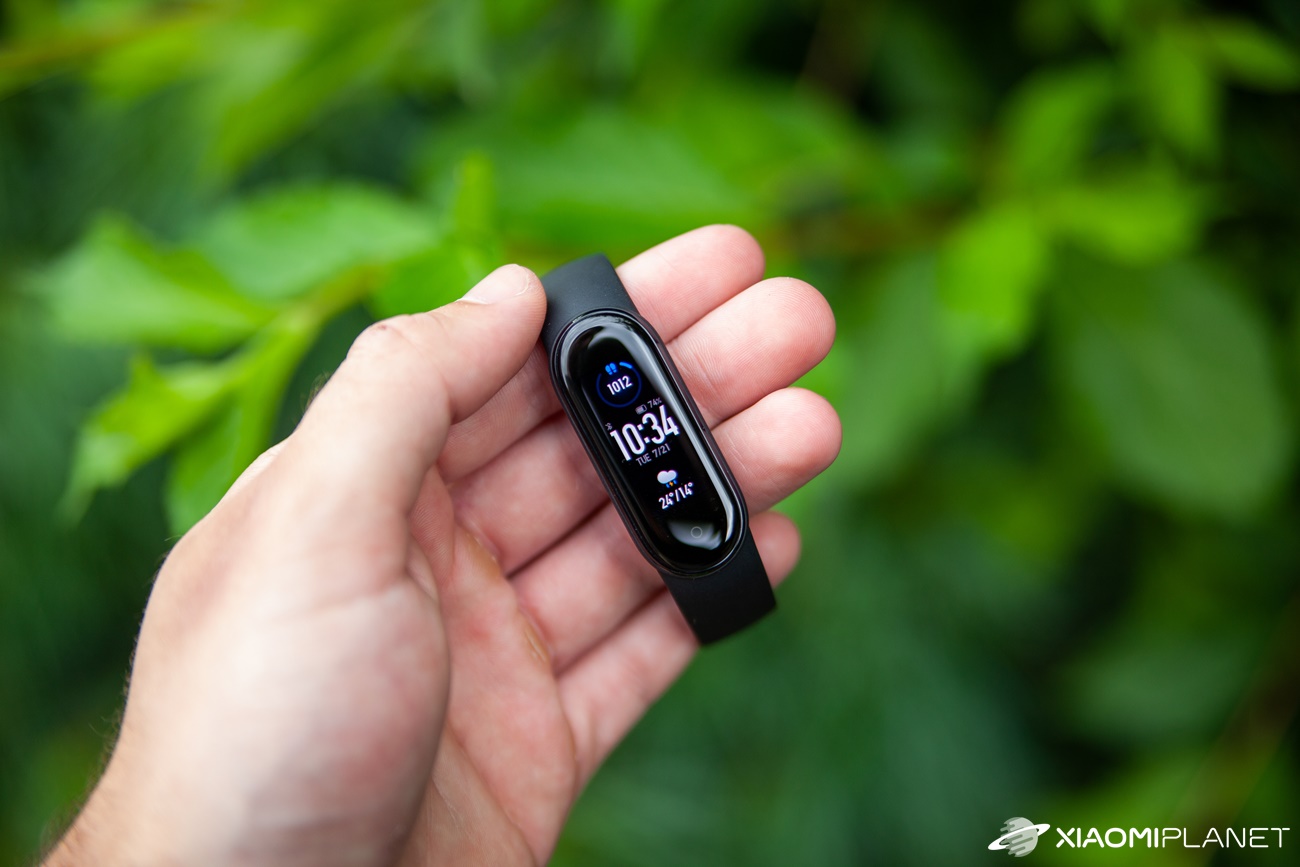 Although we were initially frightened by the weaker endurance on a single charge, the situation with the battery was stabilized and the bracelet is still an affordable, practical and functional tool for the average person, but also an amateur athlete.

Although the official European distribution keeps its price relatively high, you can get below 30 € through Chinese sellers using our discount coupons. After careful consideration of the pros and cons, you buy a fitness bracelet Xiaomi Mi Smart Band 5 We recommend.

Haylou T16 are the best headphones of the brand so far: Wireless charging and deep noise reduction