For someone missing NFC

The Chinese manufacturer has noticed the popularity of Android One devices, so the third generation is coming after the Mi A1 or Mi A2 models. There are several questions above it, and we will answer them in the just-beginning review.

Xiaomi Mi A3 is one of the latest models of the manufacturer on the European market, originated from the original Chinese model Xiaomi CC9e. The smartphone brings a state-of-the-art middle-class processor, a fingerprint sensor in the AMOLED display, a large battery or a 48 MPx camera.

You can read how the Mi A3 succeeded, what it poses for me and, conversely, what the manufacturer did not succeed in the following lines.

We bought it here

Android One from the box

The non-traditional design of the box comes with a depiction of the device itself, a large Mi A3 inscription and they are not hidden by the used Android One system or the integrated Google Assistant. After unpacking, there is a paper envelope with pleasant accessories in the form of a clear silicone case.

It also contains paper manuals as well as a needle for ejecting the hybrid SIM card / memory card slot. 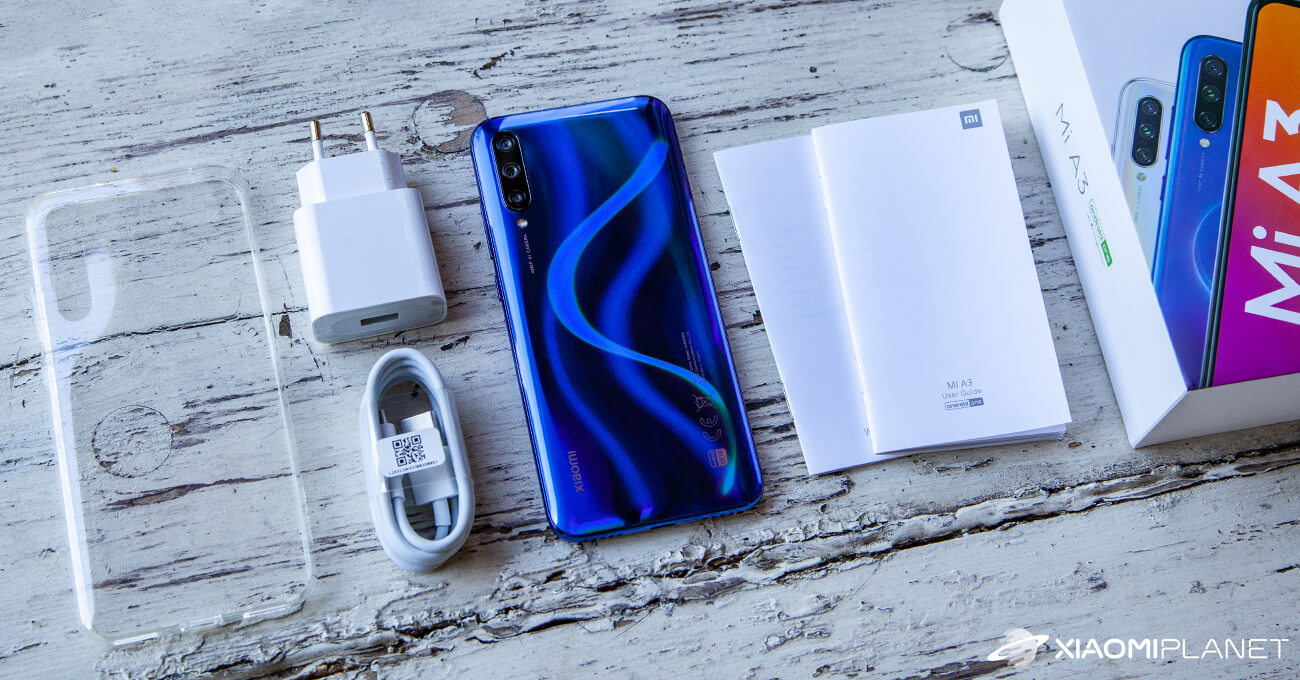 Under the envelope, there is the smartphone itself covered with a protective foil (we have a blue color version for testing) and under it the traditional charging cable (USB type C) and the end of a standard 2A charger. This is of course European in the global version, but 18W does not support fast charging.

It fits very well in the hand

The body of the device is definitely processed premium. The glossy and gradient blue pattern stands out on the back glass side and the round body with a glossy finish goes all the way to the front side of the display. In this case, the metal frame is again hidden in the bowels of the device. However, the surface finish is of good quality, the phone does not creak and fits very well in the hand. 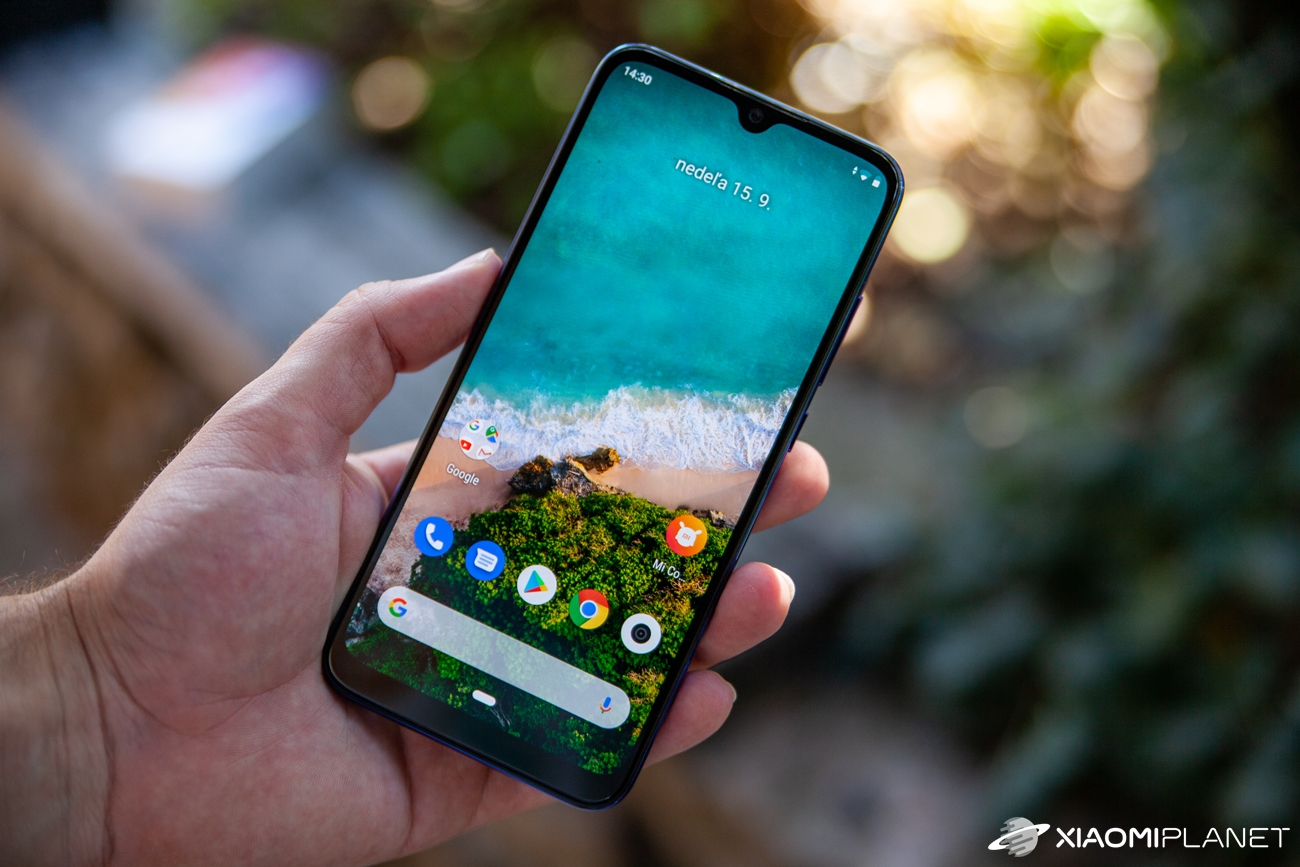 It also owes this with its dimensions, at a level of only 153,5 x 71,9 x 8,5 mm, while the weight stopped at a value of just over 173 grams. The weight to body ratio is a bit higher, but on the other hand we owe a large 4030 mAh battery, so this is an understandable step. 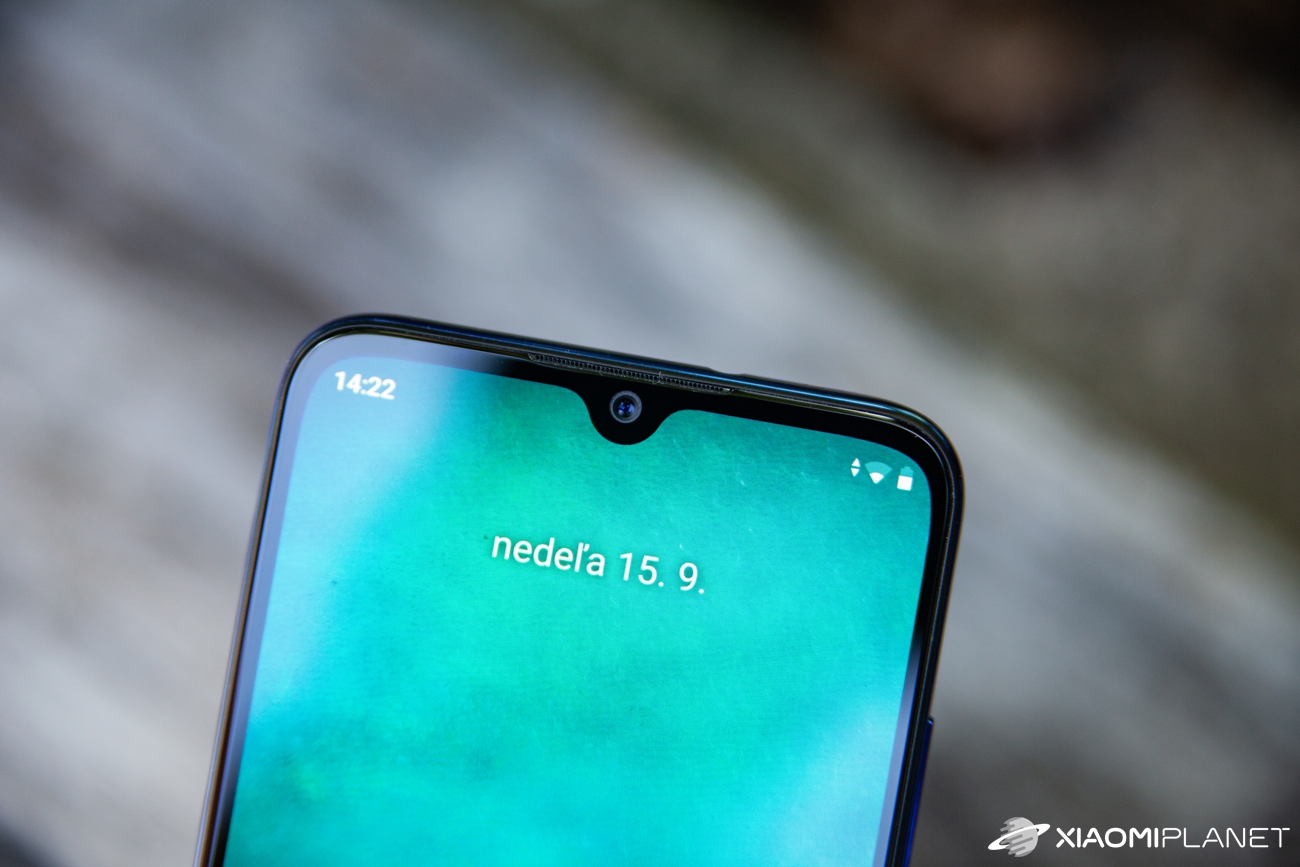 The front wall contains more than a six-inch AMOLED display with Corning Gorilla Glass 5 protective glass. It also hides the fingerprint reader, which we will talk about more in a separate chapter. In the upper part there is a cutout in the shape of a drop with a front camera, above it there is also a speaker for telephoning.

There is a small chin at the bottom. However, it has no use, the notification LED was replaced by the ambient mode for AMOLED panels. 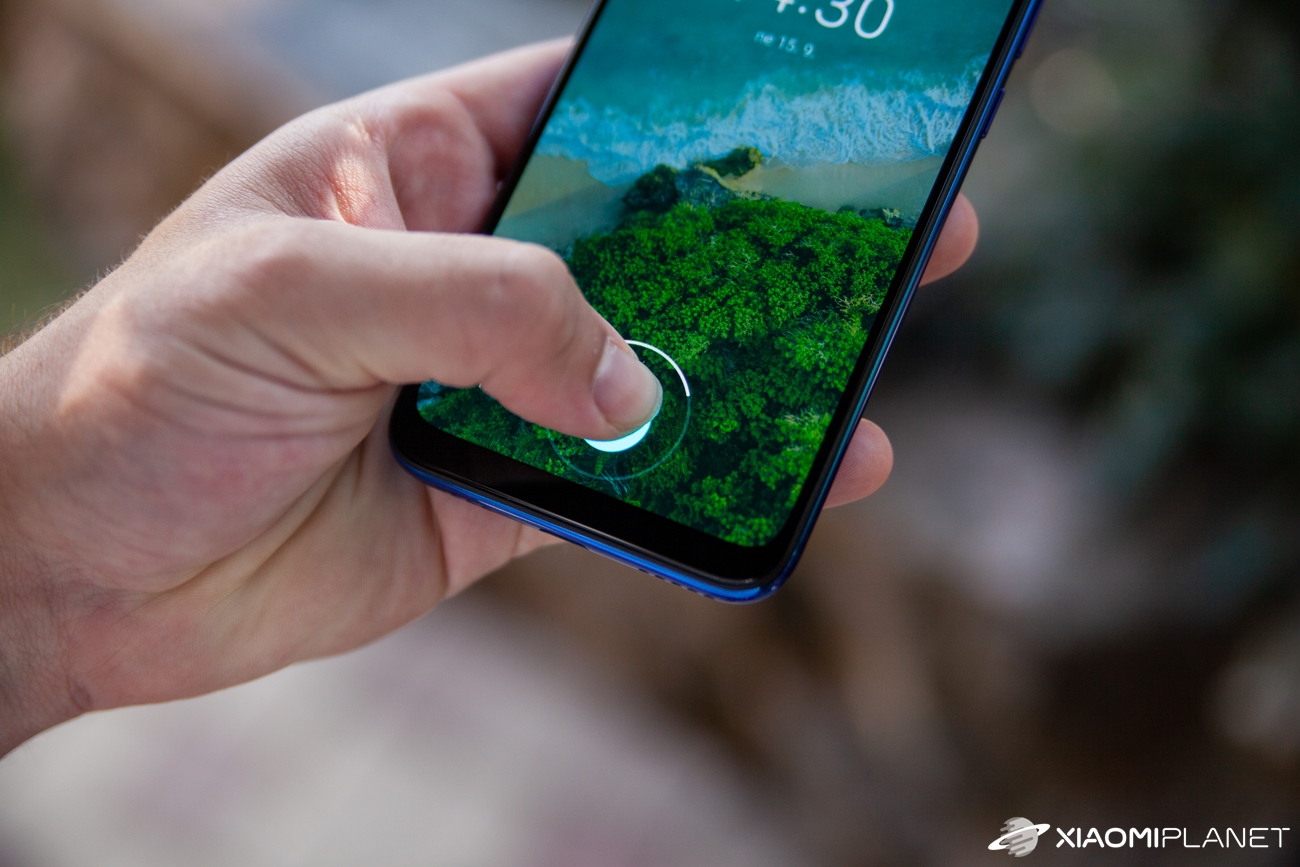 The upper edge is home to the popular 3,5 mm audio connector, which surprisingly returns (absent in the case of the previous Mi A2 generation). There is also a secondary microphone and an infrared sensor.

The bottom edge then contains a USB type C connector for charging, a standard microphone for telephony and a surprisingly high-quality loudspeaker. It is not afraid of bass tones and is relatively easy to use.

On the right side are the standard volume control and power on / off buttons. They are well used, can be felt and are placed appropriately on the impact of the thumb. The left side only offers a hybrid slot for a SIM card or memory card.

The back contains three rear cameras along with an LED flash. In addition, we will only find here the mandatory information and the Xiaomi manufacturer's logo in a modified design. Of course, the back also proudly bears the logo of Android One, which whispers cooperation with Google and shows that this is not just an ordinary Xiaomi smartphone.

The display is under discussion

However, not all equipment elements have been improved compared to previous generations. The display panel of the Mi A3 model has definitely become the target of many discussions. Although the AMOLED panel and even the modern fingerprint reader under the display will please you at the given price, the problem occurred elsewhere.

There is a 6,01 ”Super AMOLED panel in the body of the smartphone, but only with HD + resolution, ie 1560 x 720 pixels. The coarser resolution of the panel can be felt especially when switching from a finer panel, unfortunately the manufacturer had to save somewhere. However, he did not choose the most suitable place. 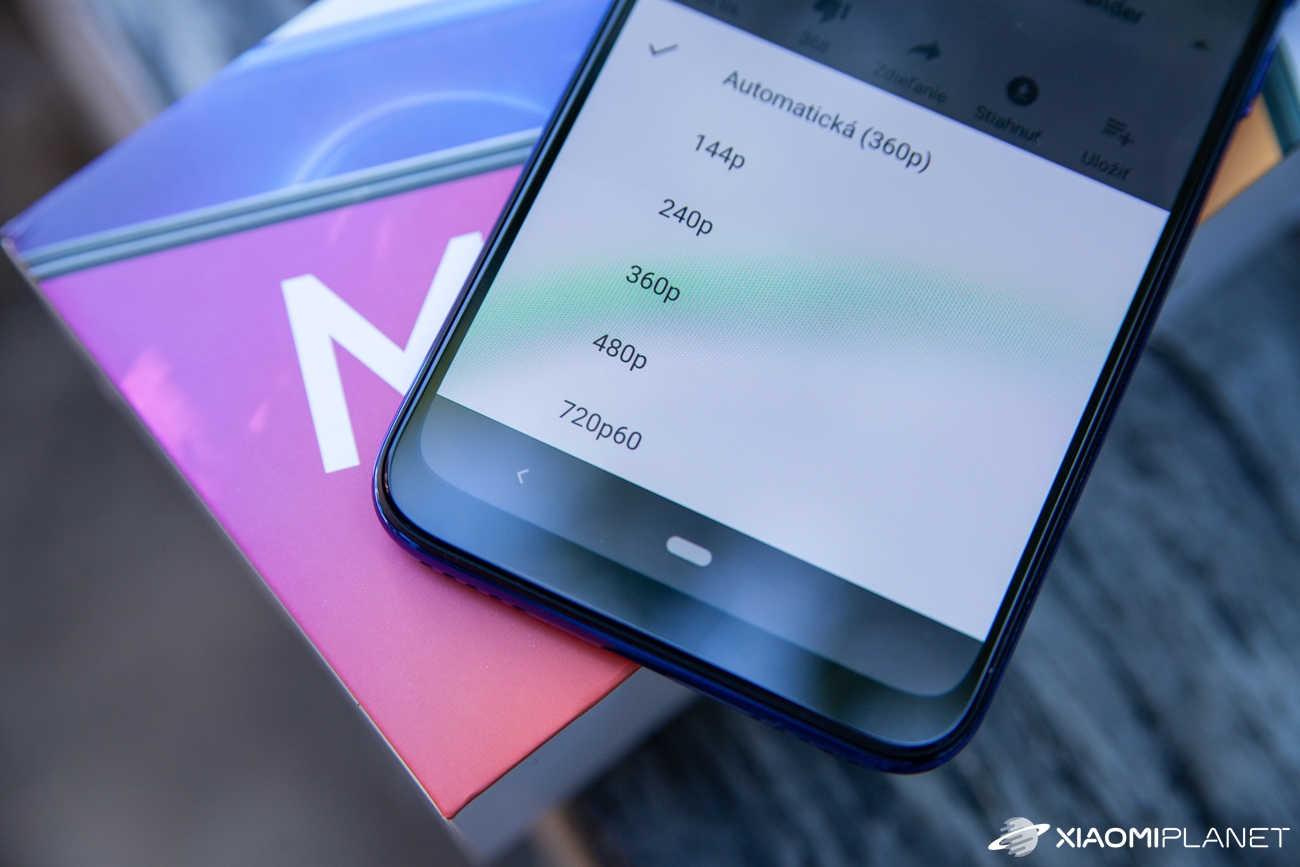 The display has an aspect ratio of 19,5: 9 and a final fineness of 286 ppi. This is not explicitly bad news, but at today's proportions of Full HD + panels it is a lower value. Nevertheless, the display will provide quality colors, including perfectly rich black, as well as very good viewing angles. However, the maximum brightness value, which is not suitable for strong midday sun, will not please you.

In terms of processor, the smartphone brings an eight-core Qualcomm Snapdragon 665 made with 11 nm technology (4 × 2.0 GHz Kryo 260 Gold + 4 × 1.8 GHz Kryo 260 Silver). It is a relatively powerful mid-range processor that can reliably and seamlessly handle the smooth operation of the device, simple multitasking and less demanding 3D mobile games.

As such, the processor is complemented by the Adreno 610 graphics accelerator, which optimally complements the mobile experience. Within its class, together with the pure Android One system without a superstructure, it is a very suitable combination. Benchmark tests performed via the popular AnTuT application can also be viewed in the gallery above.

Memory up to 128 GB and hybrid slot

The internal storage can then be expanded with a microSD memory card up to 256 GB. However, it can only be placed within the hybrid slot. The user must therefore decide whether to use the DualSIM functionality or to prefer one SIM card and a memory card.

However, when choosing the memory version and the final use of the smartphone, it is necessary to keep in mind the fact that the Android One system itself takes up as much as 11 GB of space.

New fingerprint reader below the display

Technological gadget in the form of a fingerprint reader located on the front under the display is this time included in the equipment of this affordable model. The sensor is optical, so it cannot read wet or damp hands correctly.

In terms of performance, however, the reader recognizes fingerprints relatively quickly and reliably (compared to previous generations of built-in readers).

Of course, it's still a slower response than the standard sensor type. In addition, the location is highlighted in software via the AMOLED panel. This is an interesting feature of the device and the manufacturer deserves praise for the implementation of this type of sensor.

No MIUI, just Android One

The "A" Mi series has been launching Android One from Google since its inception. Support for updates or possible errors is so long-term and very fast. The smartphone does not contain the traditional MIUI superstructure from Xiaomi, but a clean system without ancillary elements directly as the creator, Google, designed it.

It also has its undeniable advantages, but if you are used to various improvements from the superstructure, or the traditional control with software buttons, in this case you may be a little disappointed.

On the other hand, the system is very fast, does not chop and the optimization is really exemplary. It is a minimalist system with the support of Google Assistant, it contains a menu of applications and the latest gestures of the Android 9.0 Pie system.

The Mi A3 smartphone will definitely be updated to the new Android 10. During the testing, security support was also exemplary, the device included the latest September update. Overall, it was a pleasure to use this system and we did not find any significant software problem.

Cameras will not disappoint at their price

In terms of photographic equipment, there is again a proven 48 MPx sensor (f / 1.8), supplemented by an 8 MPx wide-angle sensor (f / 2.2) and a 2 MPx sensor for background blur ("bokeh" effect, f / 2.4). The three cameras are located below each other, complete with an LED flash. 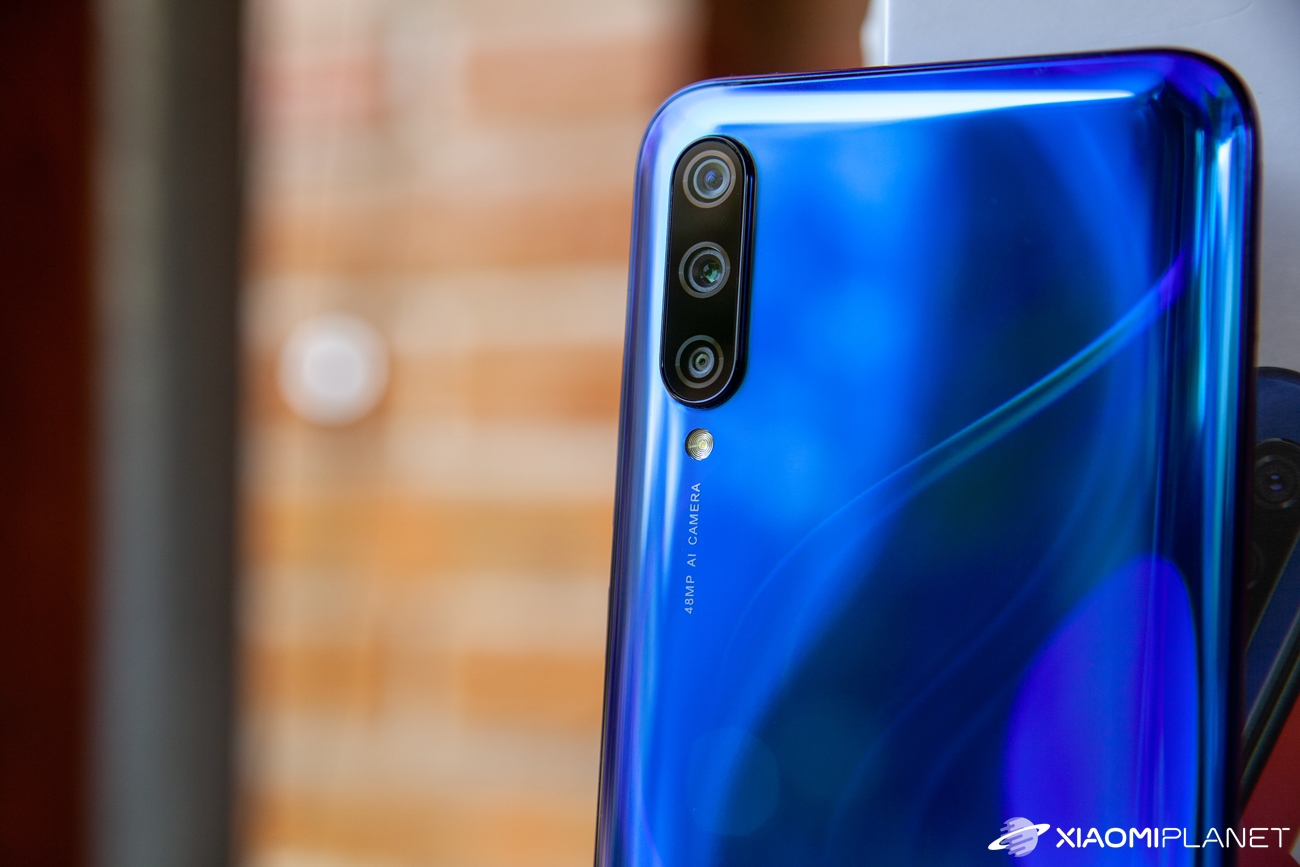 The camera application is from Xiaomi and its environment is relatively well known. The settings are designed by Android One, but their menu is standard. The front camera offers 32 MPx and HDR (f / 2.0).

Photos taken in daylight have a good depth of field, and the color rendering is fine. However, the smartphone display is slightly yellowish distorted. It's so good to look at photos on another screen.

Night photos are standard for a given price, in practice it is true that with increasing light, noise increases. However, the night mode can help and correct the result. Video from the rear camera can be recorded in up to 4K (30 fps) resolution, but 1080p recording is a bit more stable. The front camera supports 1080p video recording.

Full-size original photos are available on the following link.

In the gallery above, we bring a preview of photos in daylight, photos taken in poor lighting conditions, full-fledged, but also macro photos. Sample photos in the gallery are scaled down for review.

The connectivity of the smartphone again has one significant shortcoming. This is missing the NFC chip for contactless mobile payments. Xiaomi has traditionally ignored it in its cheaper piece. This has been the case in previous generations and is definitely not a happy solution. 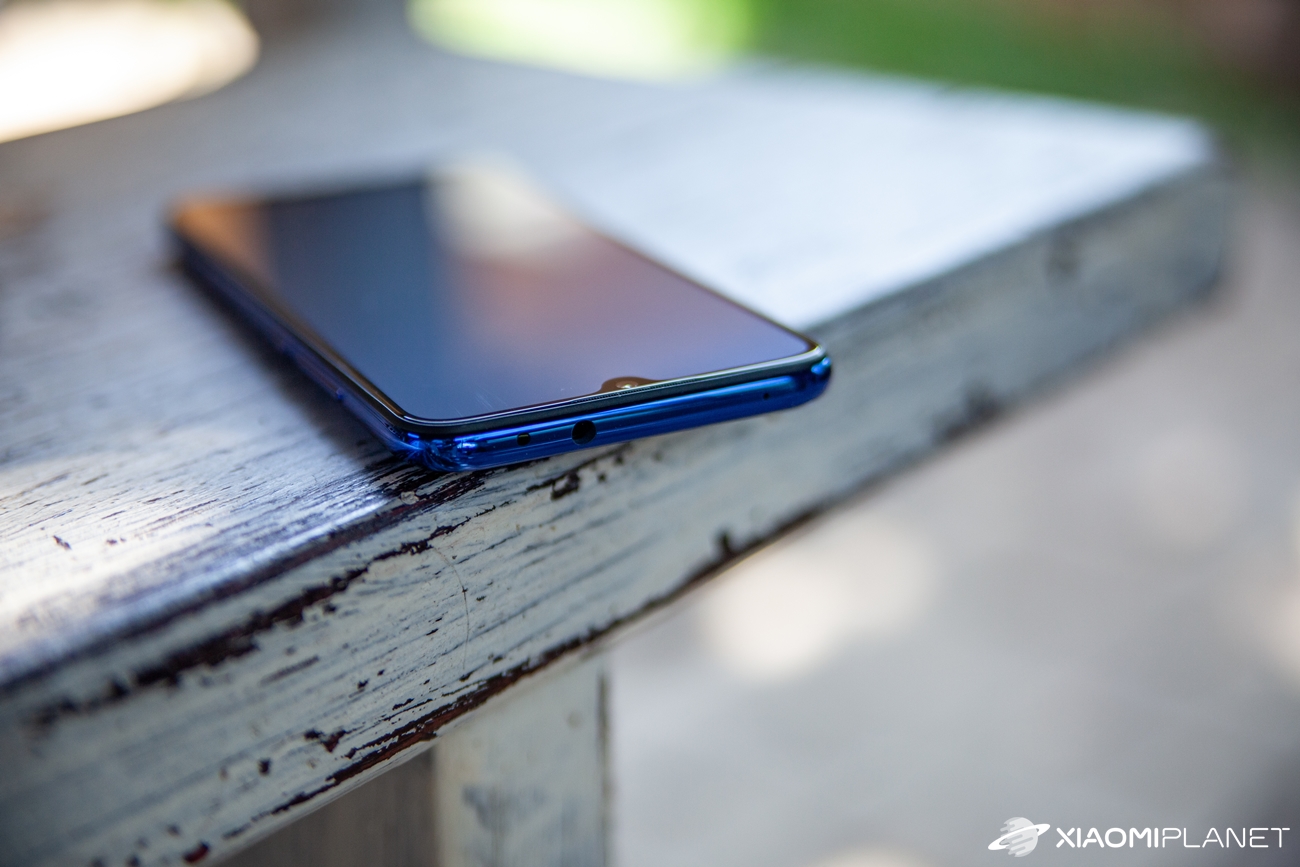 Battery life is another big improvement over previous generations. While the Mi A1 and Mi A2 models offered a battery somewhere at the level of 3000 mAh, the new Mi A3 brings a powerful up to 4030 mAh battery. In addition, it can be charged with up to 18W fast charging.

However, as already mentioned, the fast charger is not included in the package from the factory. It is necessary to buy it.

The phone can handle a full working day with the "left back". In case of demanding use, a reserve at the level of 30 - 40% of capacity will still remain in the later afternoon. Our use included frequent use of social networks, telephoning, but also watching videos plus simple multitasking.

The manufacturer deserves praise for the resulting endurance, and as far as this device is concerned, it is definitely a sales argument.

smartphone Xiaomi Mi A3 is a very attractive and affordable model. However, it has one big minus, making it a rougher HD + panel. However, if you don't mind the softness of the AMOLED display, you can buy a quality and fast phone with exemplary and fast software support from Google.

We bought it here

The bonus is great endurance and a large 4030 mAh battery or very good optimization. The great price / performance ratio will perhaps only be disrupted by the missing NFC.

Watch the official unboxing video of Xiaomi Mi MIX Alpha. For the first time we see a protective cover for this smartphone

Xiaomi does not earn a cent on Mi MIX Alpha. This is why