Spoločnosť Redmi as a Chinese subsidiary Xiaomi and the XNUMXth generation of the popular Note smartphone brings its "Pro" version. model Notes redmi 8 Pro however, it is different from the so far introduced smartphones from this series.

Redmi decided to use the latest processor from not very popular manufacturer MediaTek, which many fans embarrassed. We bought Redmi Note 8 Pro to confirm / refute the fans' concerns about this chipset.

We bring you one of the first detailed reviews of this smartphone in Slovakia.

I want a discount on Redmi Note 8 Pro

A box of standard sizes with an illustration and model name will also offer optional accessories. Right on the top is a paper envelope that includes a SIM card / microSD card slot eject needle, a quick guide, as well as a simple and clear silicone case to protect your device.

The cover also aligns the protruding camera lenses on the back, which is also a welcome plus. 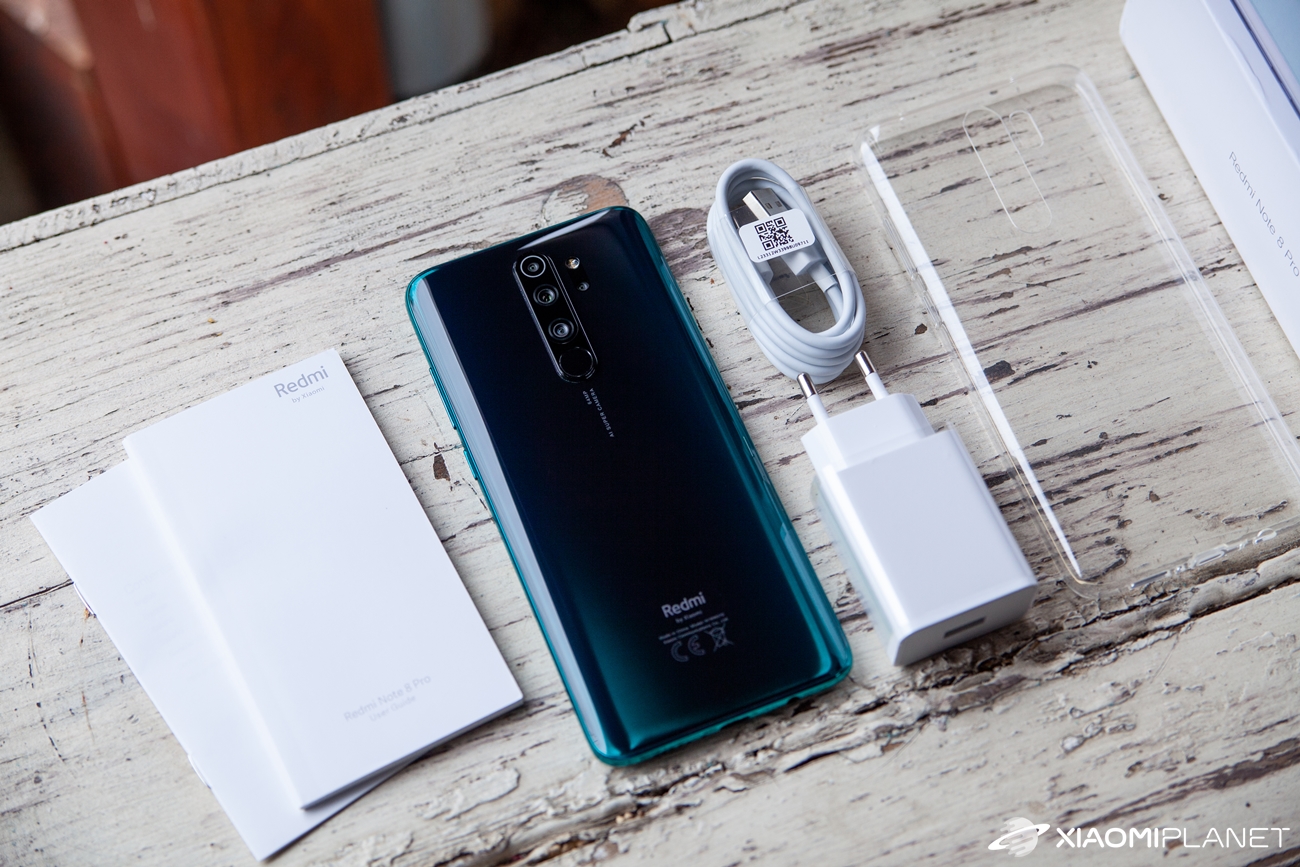 Below the package is the smartphone itself, covered with a protective film. Below it is a cable with a USB plug and a USB Type C plug for charging or charging. computer connection.

The smartphone supports up to 18W fast charging and a large 4500 mAh battery can be recharged with a European charger, which is also included. We definitely praise for this manufacturer.

The smart phone is definitely not a compact model, but in the pattern of "sevens" as its predecessor, it offers quality workmanship with a gradual adjustment of the rear wall. The metal frame is again covered with a plastic and glossy finish, the rear wall is covered with protective glass. For the test we had a green design, which together with white evaluate as the most beautiful. 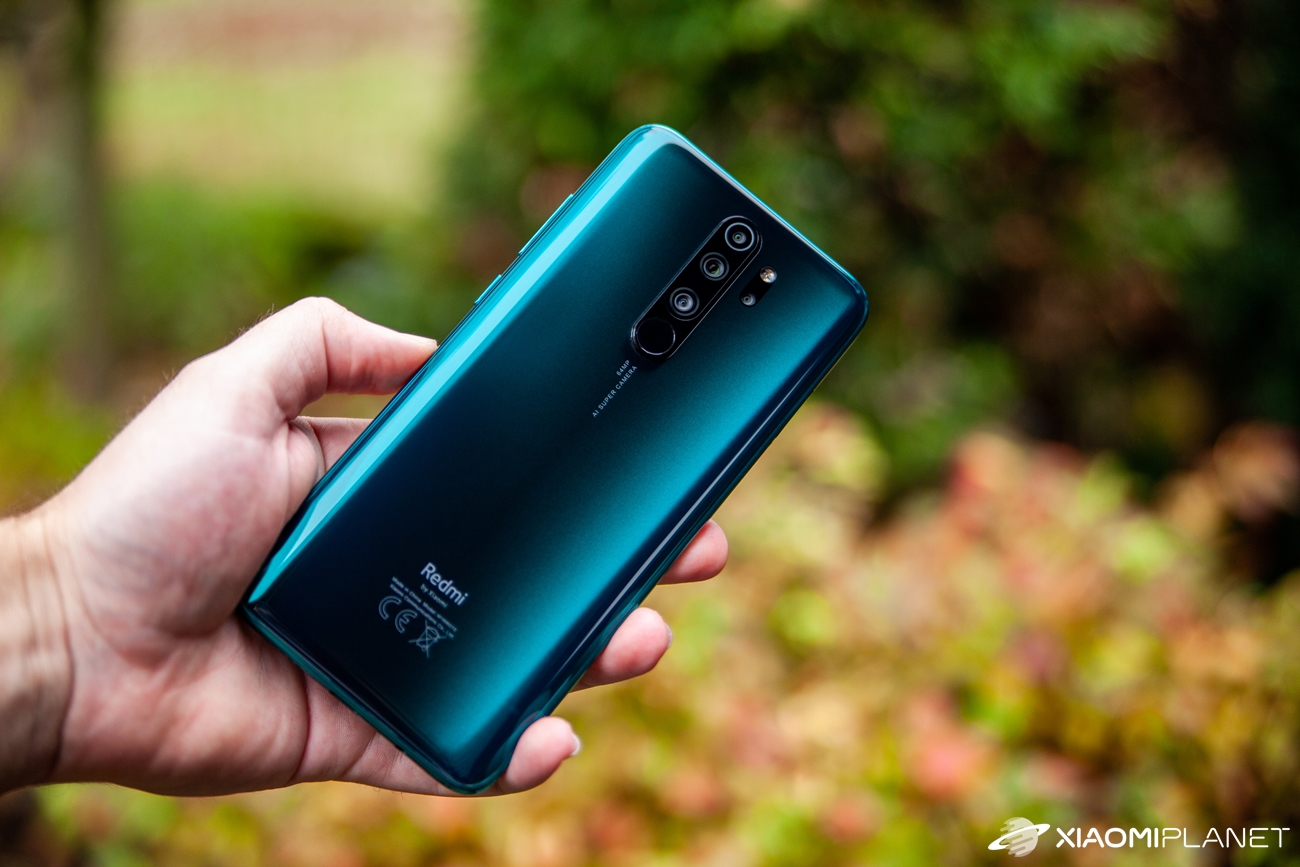 However, all parts of the body of the device hold firmly, it doesn't creak anything, and the Redmi Note 8 Pro model definitely feels more expensive, compared to the actual selling price. The overall dimensions of the device stopped at 161,4 x 76,4 x 8,8 mm, which will suit especially users with larger palms.

In addition, the protective cover increases these dimensions by some millimeter. The weight of the device stopped at a value equal to 200 grams, which is a higher value in the category. However, thanks to its thickness and weight, the phone has been given a larger battery, and this is a compromise that is definitely worth taking. It is even present as well IP52 certification against water and dust.

The front wall features a large, up to 6,53 ″ display along with a drop-shaped cutout and minimal frames. It is the border of the display that is much thinner than the previous generation, and thanks to this, the phone gives a more premium impression. 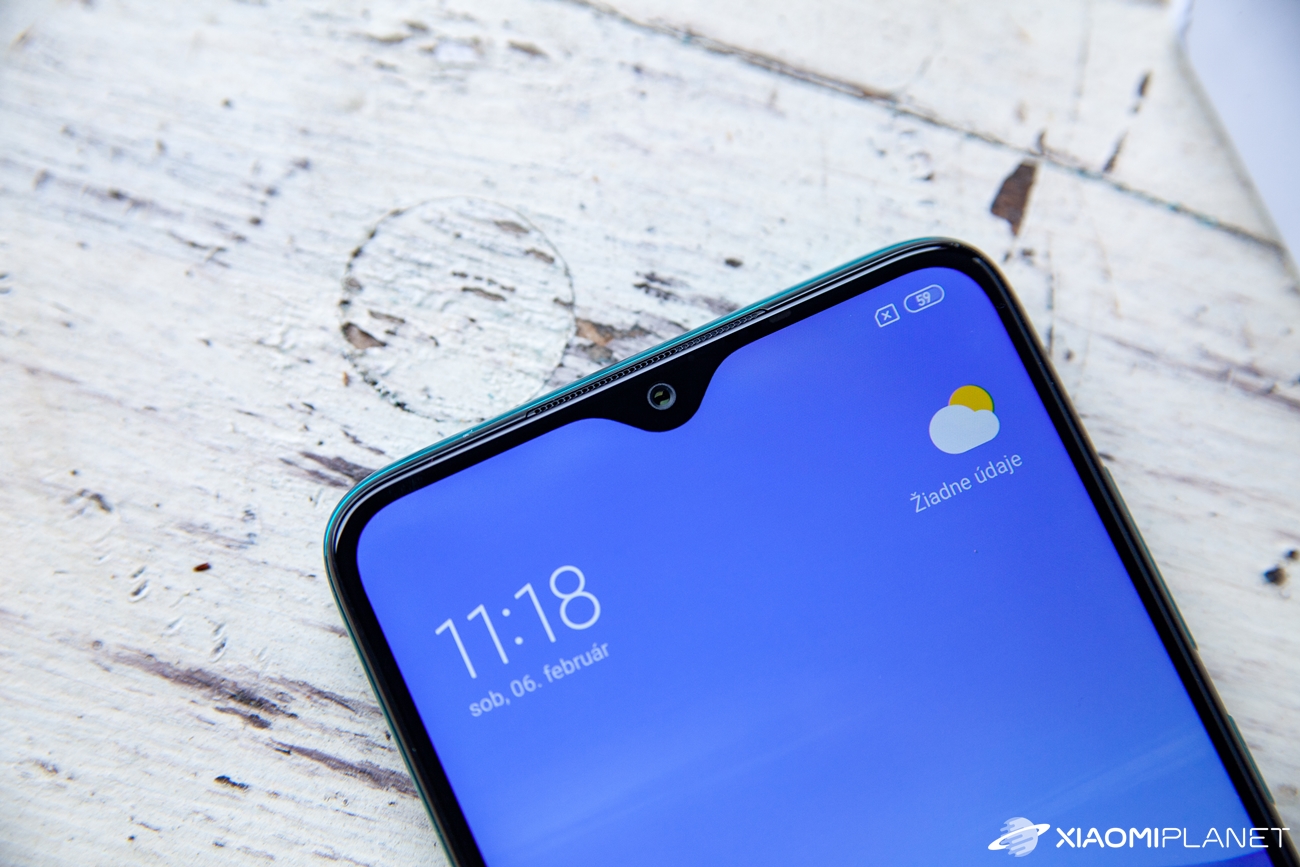 The cutout also includes a front camera, a speaker for telephony, and the lower chin is thinner again. There is also an LED for notifications, but it is again quite bland and we preferred to set the display to show the notifications.

The upper edge offers a secondary microphone for video recording, as well as an infrared port for home electronics remote control (the phone also includes its own software for this component). The lower edge includes a USB Type C connector, an average but loud speaker, a primary microphone, and a standard 3,5mm audio connector. Great news.

On the right side are the volume control buttons as well as the power on / off button. The buttons are shiny and are not distinguished in any way, yet their placement is fine. 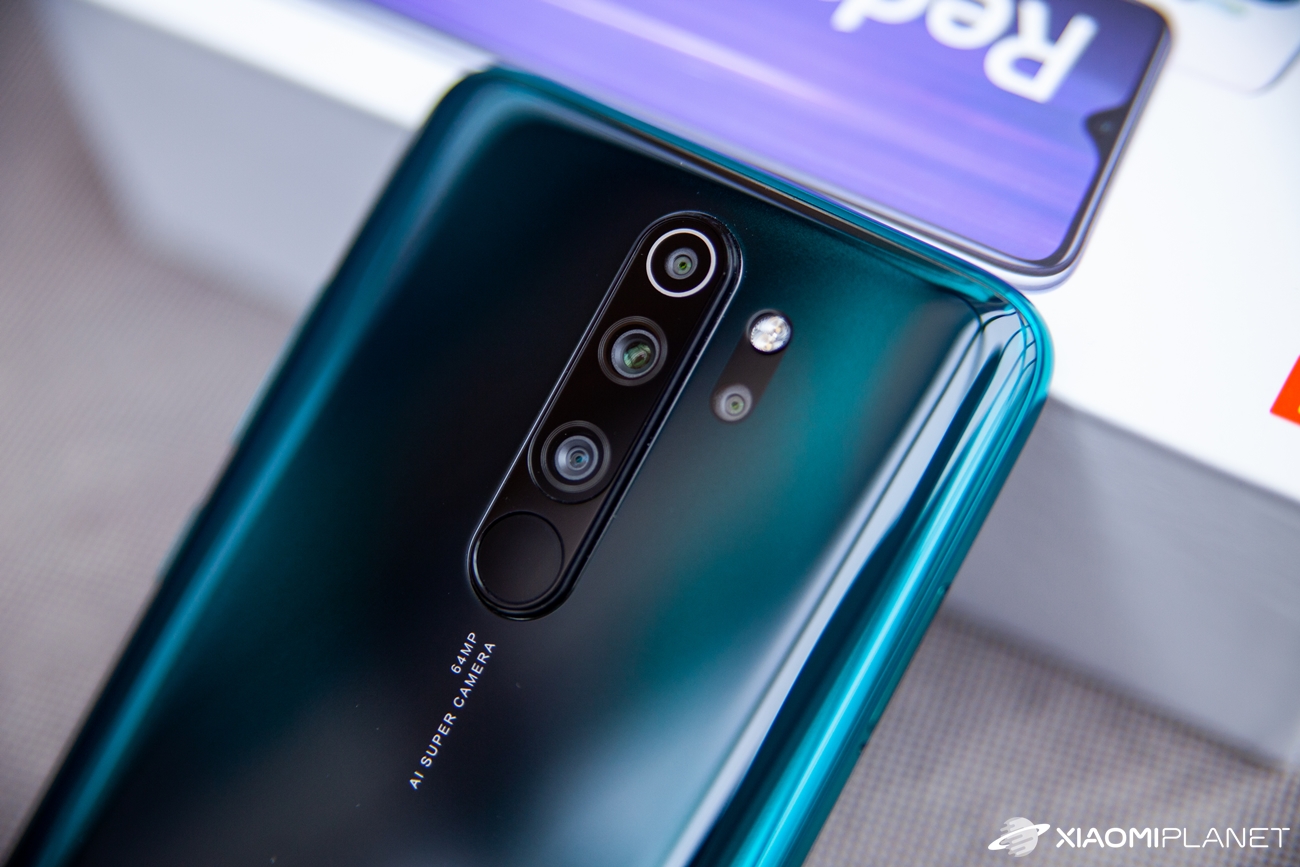 The rear wall is glossy and offers three protruding rear cameras (including the main 64 MPx sensor), and a standard fingerprint reader in the same protruding module. Its location may seem inappropriate, we haven't detected a problem with the sensor, and that's why it's okay. 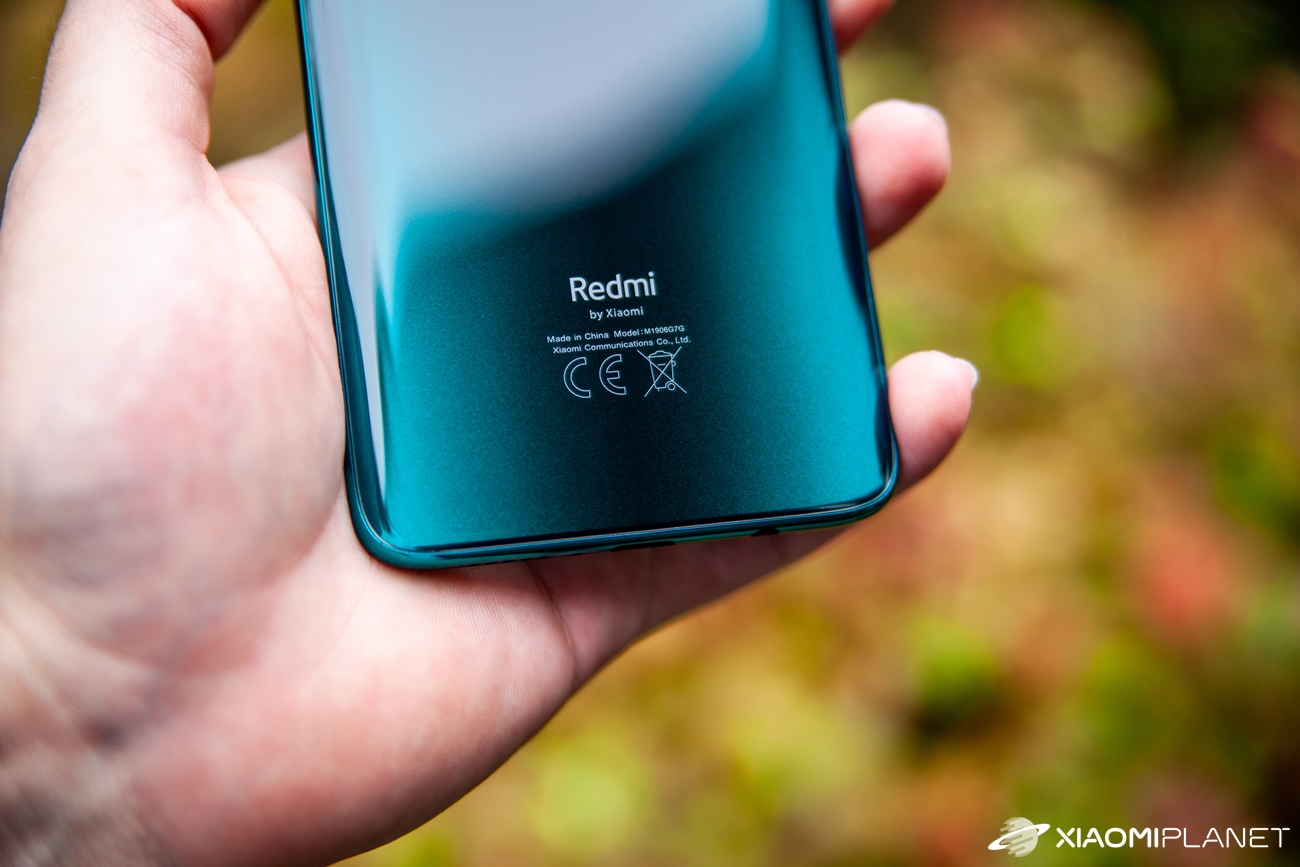 To the right of this module is the LED flash and the fourth rear, this time only 2 MPx camera. Below is only the manufacturer's logo and recycling data.

The color rendering of the display is true, natural and the colors are tuned to the cold. However, this can be modified in the settings. It is one of the best IPS panels in the price range and surpasses its predecessor in terms of brightness. The maximum brightness is really good and the display is also readable outside. The minimum brightness is not a problem either.

This is definitely unusual for predecessors who used Qualcomm processors. Nevertheless, the Eight does not have to be ashamed.

The increased RAM is definitely felt and the environment is fast and smooth. They also don't have to worry about players, although some titles can only get support for the new processor later. For a given price, however, it is excellent equipment and the new owner does not have to worry about lack of power. You can view the results of the AnTuT tests in the gallery above.

The latter combination is likely to be the best-selling in terms of price / performance. 8 GB RAM + 128 GB of storage can also be found in selected markets, but this is a rarity.

With standard usage, enough space is available, plus the hybrid slot allows internal storage to be expanded with a microSD memory card up to 256GB. When you turn on Android for the first time, MIUI will cut nearly 10 GB in total. Delight your device cleaner with which you can delete temporary or unnecessary files.

The fingerprint sensor is located in the upper half of the back wall of the device. It's part of the protruding rear camera module, which doesn't sound like the happiest idea.

However, the opposite is true and the sensor is easily palpable. The height and size of the sensor are also suitable, with the placement itself highlighting, for example, the use of the enclosed protective cover. 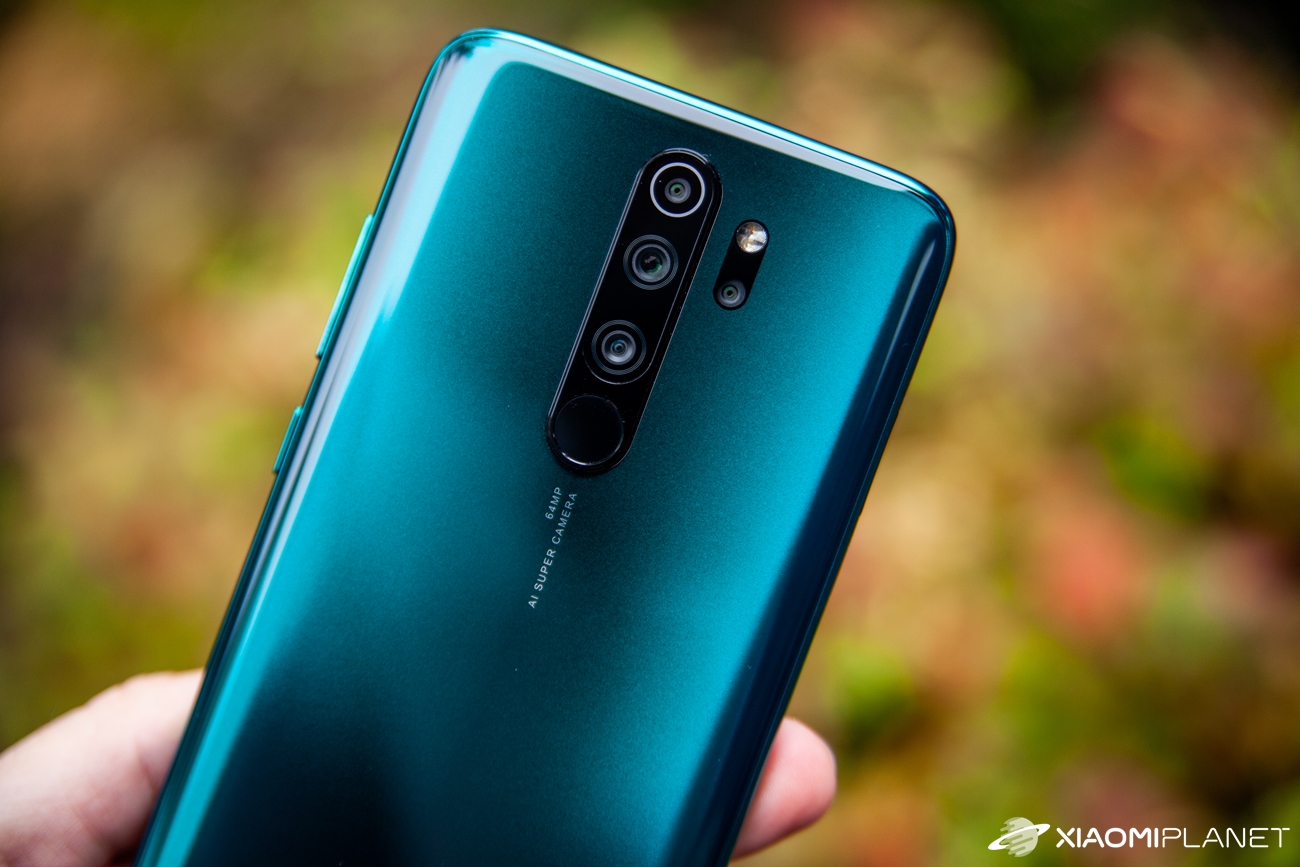 Sensor speed is truly exemplary, it is one of the fastest standard sensors on the market. Although this technology is pushed out by the fingerprint reader integrated under the display, it still does not reach the speed of just a standard sensor.

In this price range we consider the choice of the manufacturer as reasonable and the end user of the benefits is in this case the customer himself.

In terms of the system itself offers a model Notes redmi 8 Pro so far last year system Android 9.0 Pie. The update to the latest Android 10 does not yet. However, the system speed is very good and does not interfere with the MediaTek Helio G90T processor.

Security supporters will be pleased to see the security update as of 01.10.2019. Only the November security package is missing and that is quite good news in the price range.

Like the system, the upgrade is still waiting for the latest update. MIUI 11 is also expected to arrive on this smartphone in the coming weeks, late December 2019. However, a stable version is currently on the phone MIUI 10.4.2.0.

It also offers a dark environment mode, but it still has an old font font. This, along with other improvements, will only appear in the latest version of the superstructure from Xiaomi.

The superstructure is traditionally adapted for European users, thanks to the global version of the device. This means the user doesn't have to worry about anything and is not welcomed by inappropriate ads or spilled "Chinese tea," but the pre-installed Play Store with Google Apps and Services will be pleased.

We know well-proven and smooth extensions in combination with 6 GB RAM, but we are already looking forward to the system's response to the arrival of a newer version of both Android and Xiaomi.

Up to four rear cameras

The main driver of the cameras on the back is a full-fledged 64 MPx (f / 1.9) sensor whose photo size ranges up to 30 MB. Normally, however, it takes pictures at a resolution of 16 MPx, while the photo is really detailed and gives true colors or sharpness. 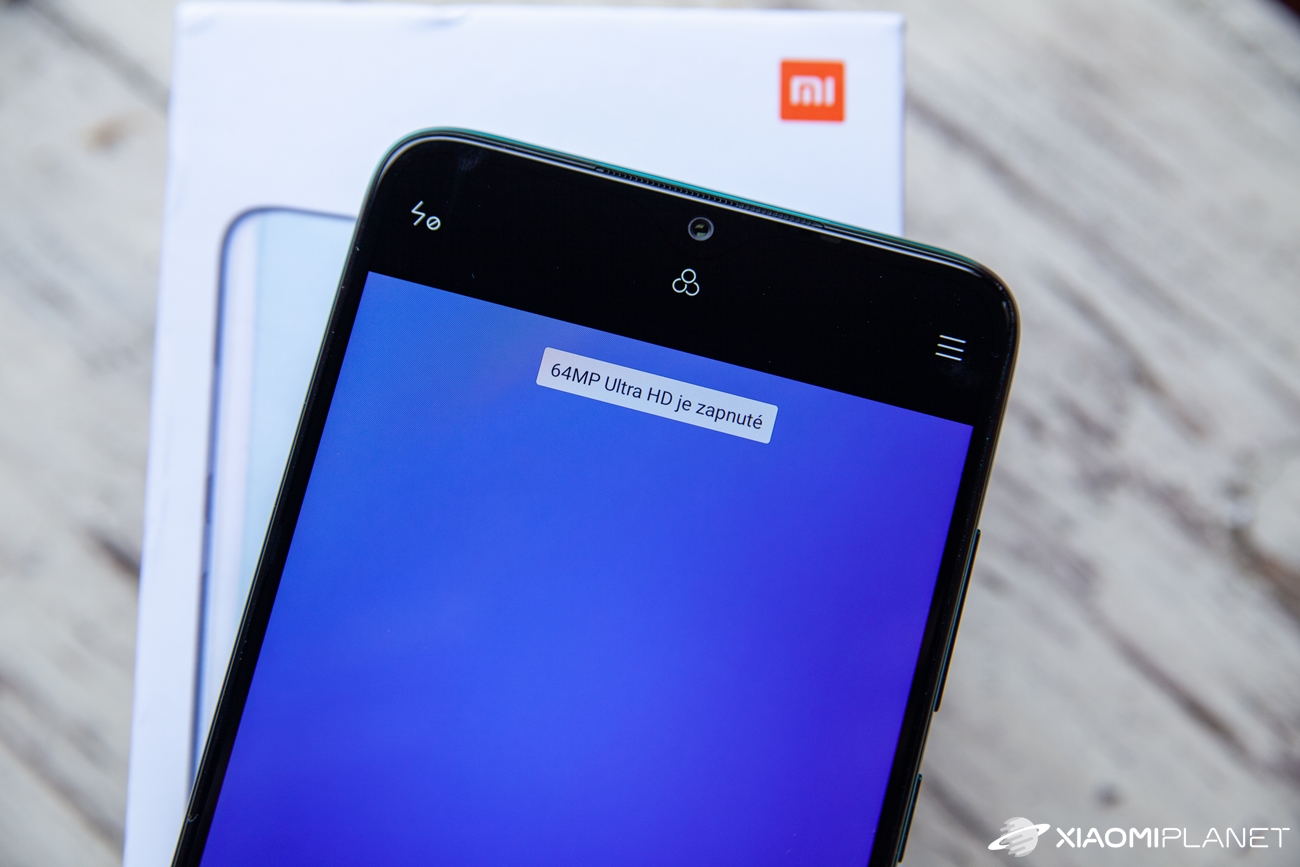 The second is the 8 MPx (f / 2.2) wide-angle sensor, ideal for shooting large objects nearby. There is also a 2 MPx camera for "macro" shots and a 2 MPx sensor for a blurred background effect.

Practically the most effective sensor is just 64 MPx, especially thanks to its use at 16 MPx, but also full 64 MPx images, will also delight the LED flash. The widescreen sensor is also very good, but also useful. 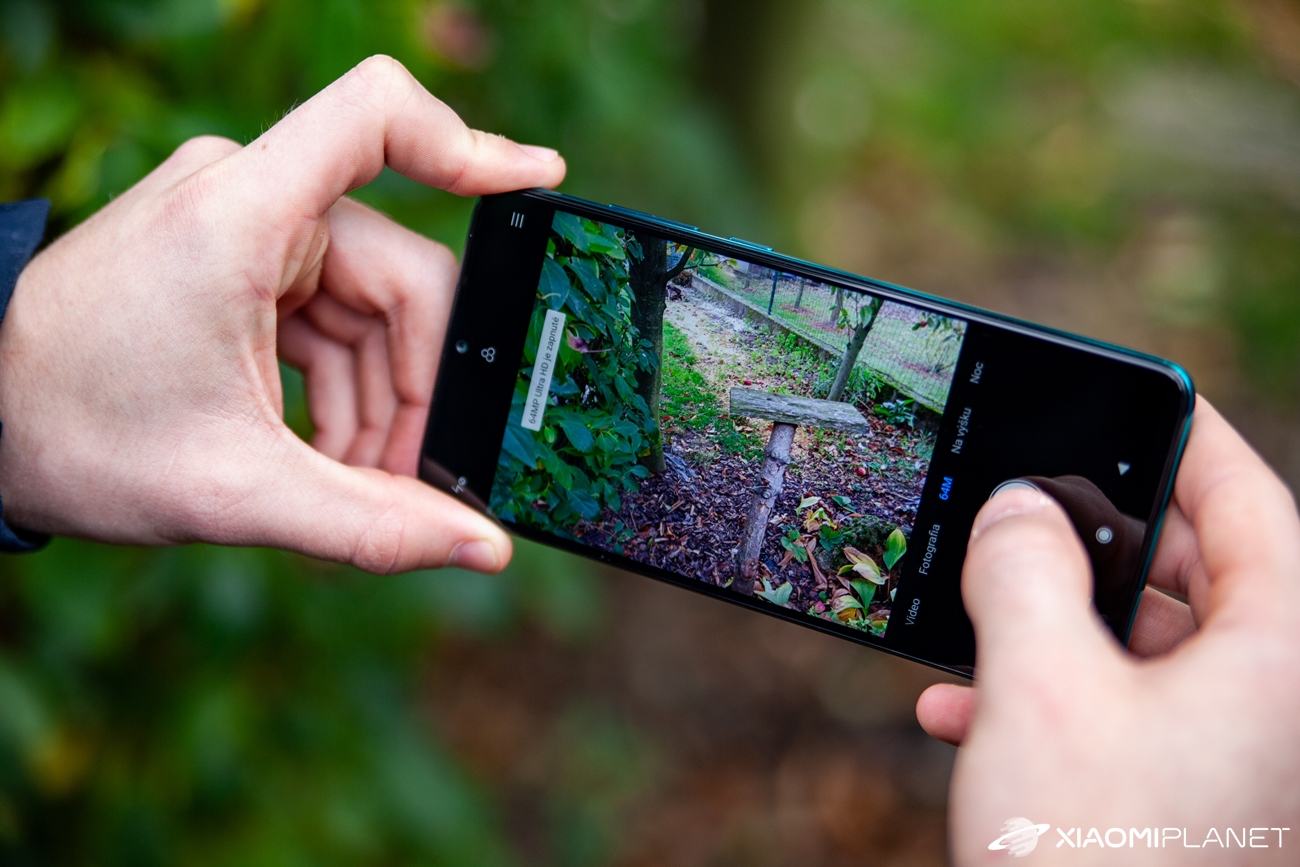 The macro lens has a low resolution and its color rendering is richer, so the resulting image is further from reality. Video from the rear camera can be recorded up to 2160p (30fps).

The front camera is located in a notch in the display. It is drop-shaped on the front and offers a 20 MPx sensor (f / 2.0) with HDR. Video from the front camera can be recorded in 1080p (30 fps) resolution. The price / performance ratio is maintained even in the case of the camera, and especially the main sensor will please many fans of mobile photography.

In the gallery above, we bring you a preview of the daylight photos, photos taken in low light conditions, full 64 MPx, but also “macro” photos. 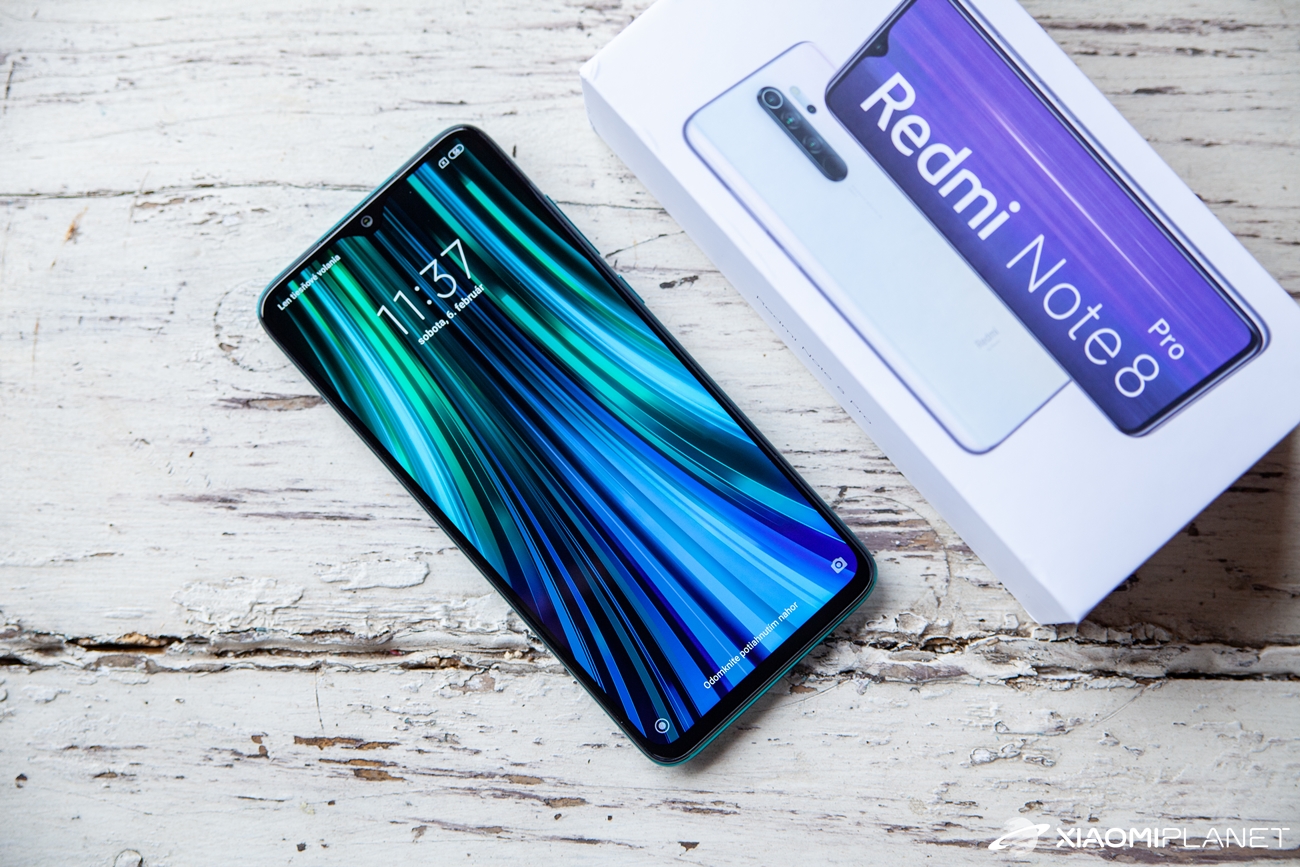 It delivers FM radio, a standard 3,5 mm audio headphone jack, an infrared port for controlling home electronics and an NFC chip. This is especially popular for contactless payments via Google Pay. Unlike the predecessors of the “Note” series, this functionality is also missing.

The battery has grown to a great 4500 mAh

The smartphone contains up to 4500 mAh battery, which can also be charged with a fast 18W charger. This is included in the package with the European ending, which is definitely good news. Battery capacity increased.

Although in the case of predecessors the standard was somewhere at 4000 mAh, this time the capacity will offer 500 mAh more.

In our case, a full-fledged business day included active social networking, a brightness display of approximately 70%, hourly phone calls, hourly 1080p video watching, and casual gaming. Even under such a load, the phone offered very good durability and the manufacturer deserves praise.

The price around 200 € is above standard

The affordable model surprised, especially with its photographic equipment, fast system responses, but also a large battery with very good battery life and fast charging. Xiaomi thanks to perfect optimization breaks down the myths about unreliability of MediaTek processors.

Redmi Note 8 Pro offers perfect performance even for more demanding games, a very smooth system without any chopping. In this price range it will offer an above-standard user experience and we highly recommend buying this model.

I want a discount on Redmi Note 8 Pro

We are not afraid to say that Redmi Note 8 Pro is the best model in the entire history of the Redmi Note series of smartphones.

Video: This is how Xiaomi Mi Note 10 looks from the inside. All components fit together beautifully

Xiaomi is launching a monitor segment. It is preparing another game curved model with a smaller diagonal