Photo and Video: This is how the best smartphone ever in Xiaomi history looks from the inside

Smartphone maker Xiaomi recently released an official video about his latest flagship Xiaomi Mi 10 Pro. The video offers an insight into the internal structure of the smartphone and also provides a brief description of the components and their arrangement.

A look inside the Mi 10 Pro is one poem

Xiaomi starts from the back and reveals the inside of the device by removing the back cover. After removing the glue that fixes the back cover to the body, it is possible to observe two large surfaces with rubber foam insulation. These are mainly used to protect against damage from falls and other accidents.

Much of the interior is covered thermally conductive graphite, which is located in the area of ​​the motherboard. Other components are also visible, such as NFC coils a wireless charging technology. 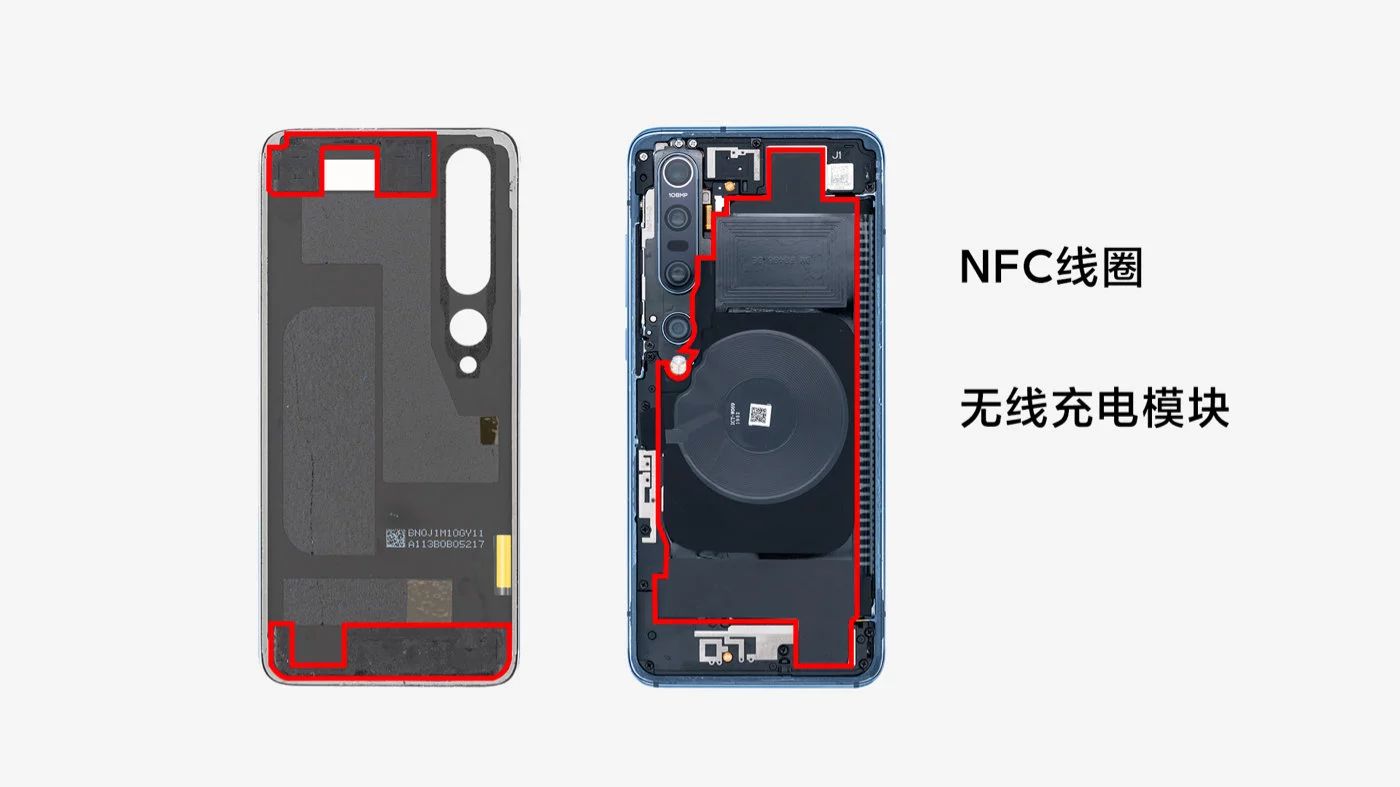 The Xiaomi Mi 10 Pro speakers are placed symmetrically at the top and bottom of the device. They are made of magnetic steel and they come with a cavity up to 1,22 cm³. This allows for a better stereo sound experience. It is said that the Mi 10 Pro speakers are improved by 100 percent compared to previous generations. 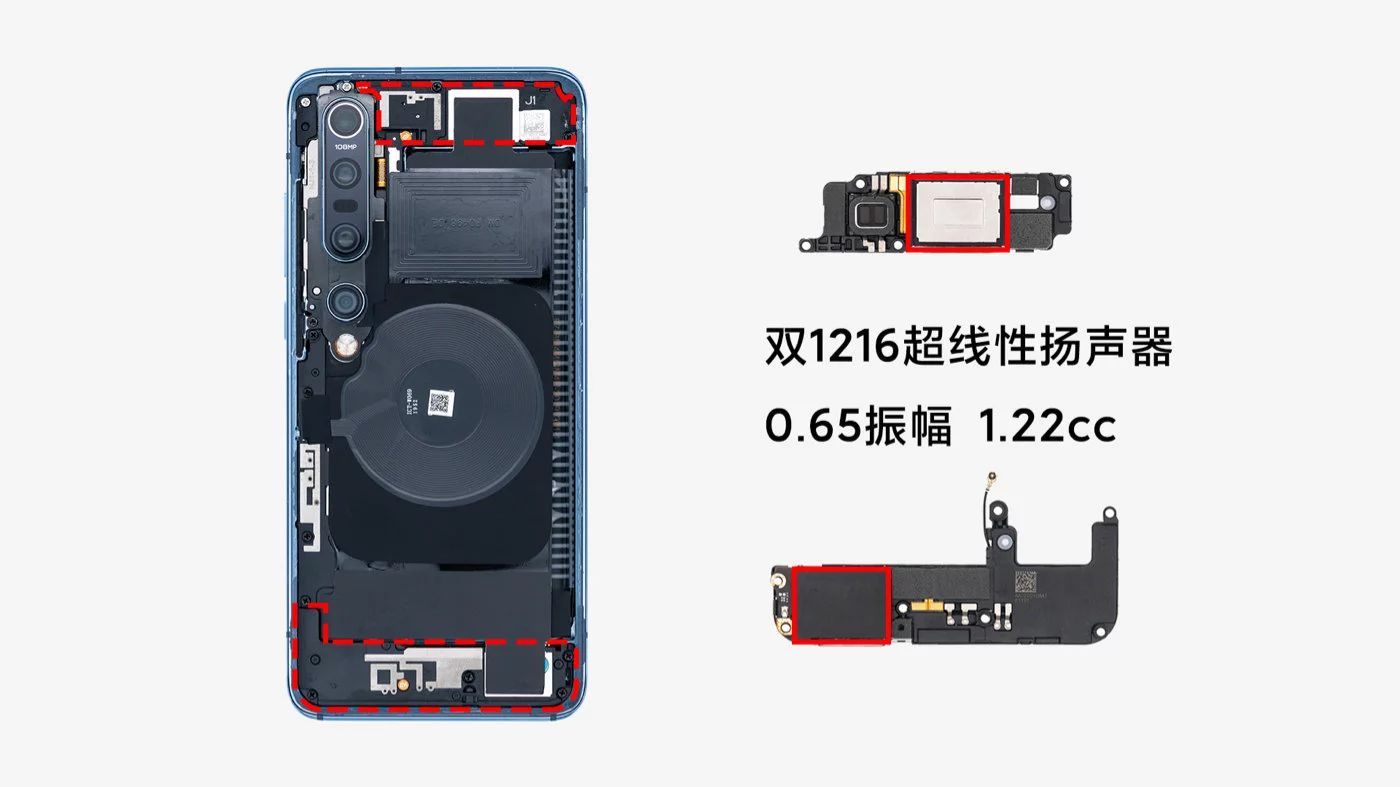 After removing the other cover, the motherboard and the Mi 10 Pro battery will appear. The motherboard uses a two-layer design, which means that it consists of two smaller parts placed one above the other. The manufacturer's team has significantly saved space. 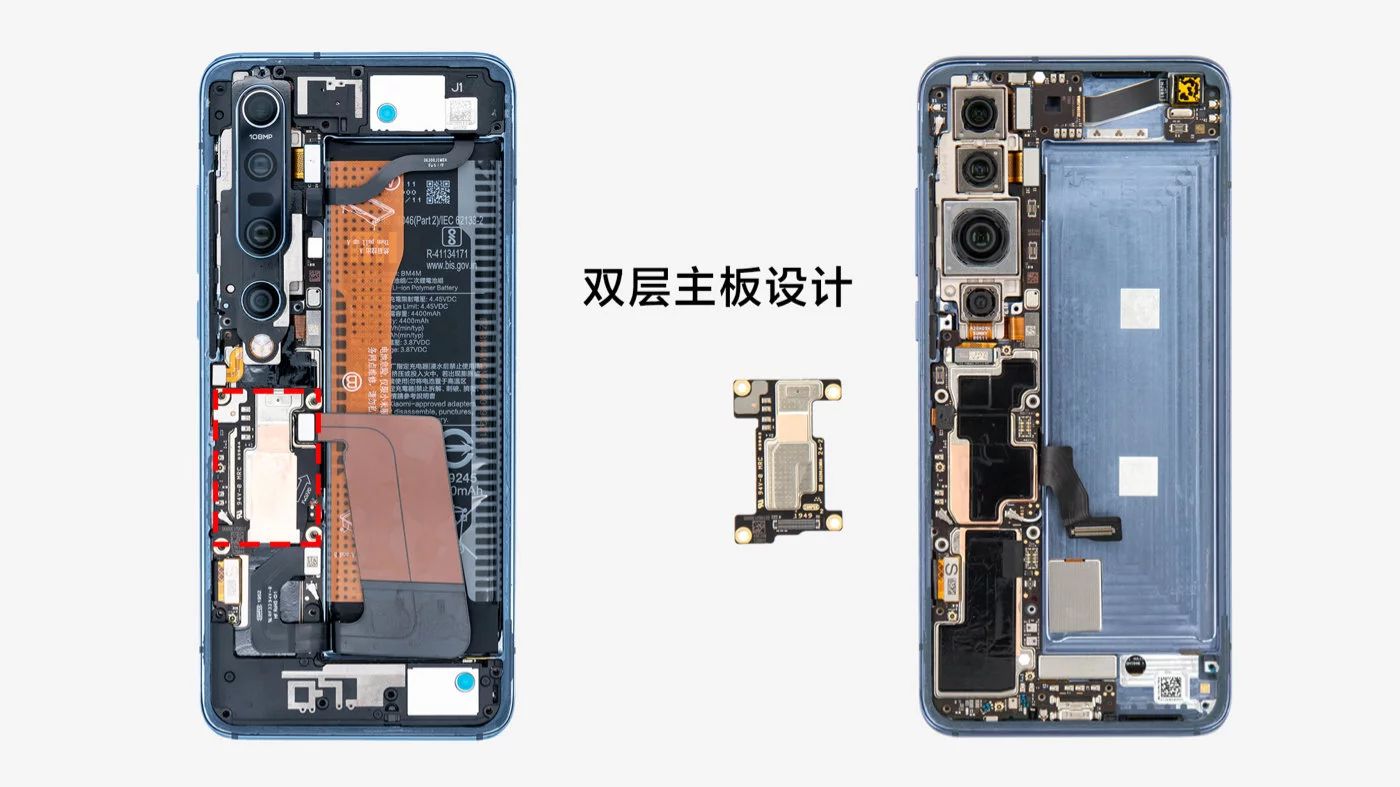 It is big on the right battery with a capacity of 4 mAh and occupies most of the interior space. Below it is placed ultra thin optical fingerprint sensor. It captures the thumb or finger attached to the display and, due to its size, significantly saves space.

After removing the rear camera cover, you can see the whole camera module Xiaomi Mi 10 Pro. As can be seen in the picture above, The 108 megapixel sensor is the largest and is conveniently located in the center. 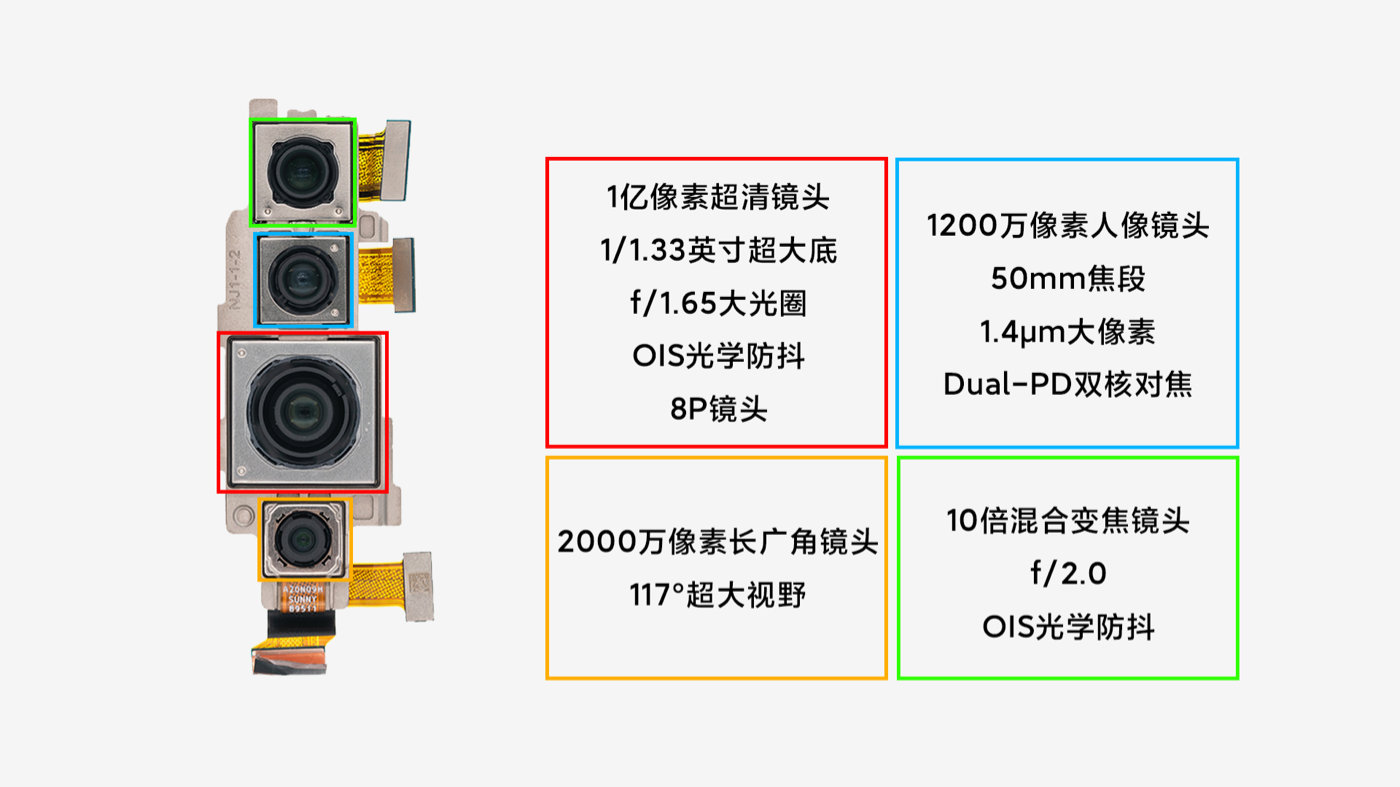 Other components are also present, such as LED flash a laser focusing modulewhich allows better visibility and focus speed in low light environments.

The Mi 10 Pro has a unique 360-degree ambient light sensor technology. In other words, when using cameras and correcting the brightness of the display, the smartphone captures light not only at the front but also at the back. This allows for better brightness adjustment.

Clear arrangement of the motherboard

The main part of the motherboard of the flagship smartphone has an "L" shaped design. She is equipped copper foils a graphite shield. At its top is a newly developed chip 6 WiFiwhile in the middle is power management module a audio decoding technology. It is located at the bottom of the motherboard high frequency chip. 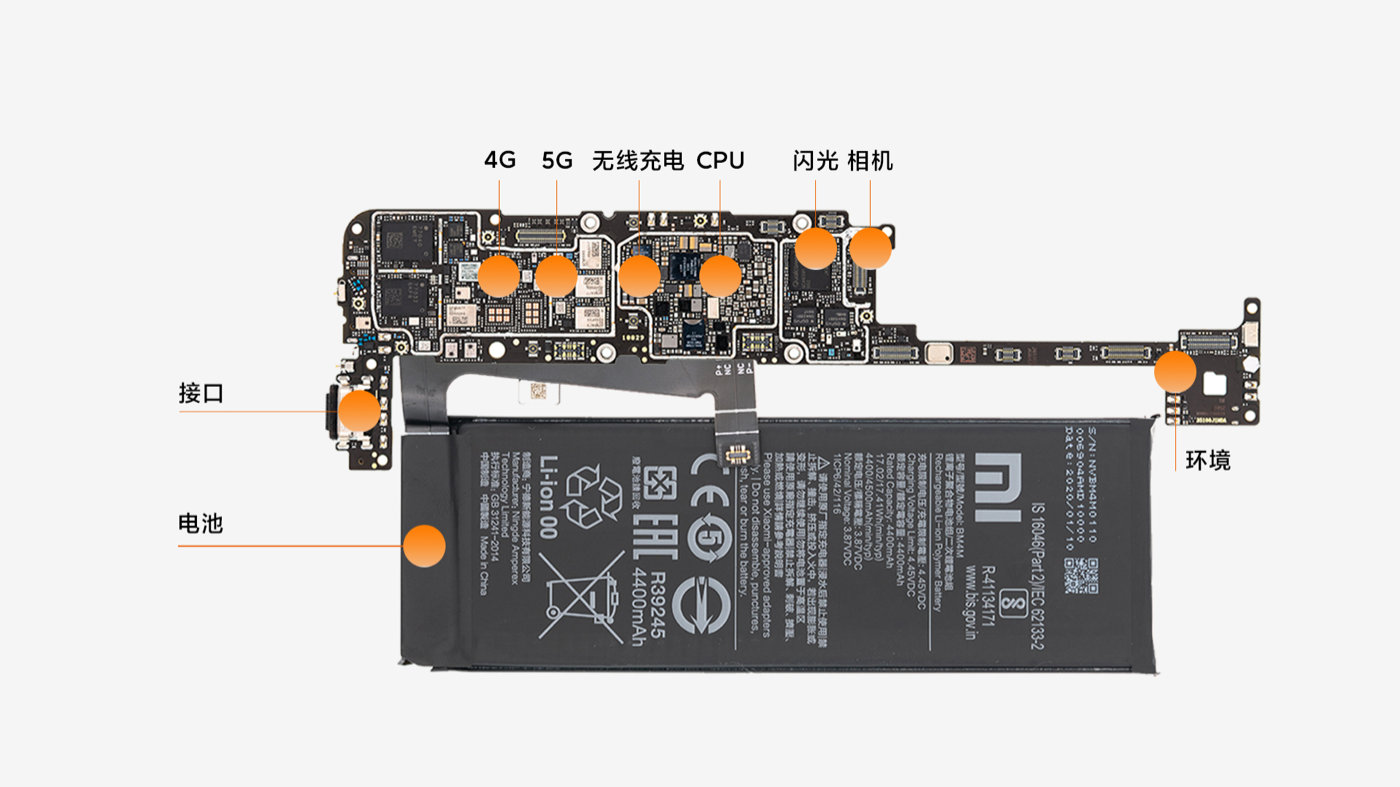 There is also a chip set Qualcomm Snapdragon 865 SoC along with a 5G modem X55. A pair of flash memory L and storage space UFS 3.0 they enable top read and write speeds, as well as fast data transfer.

The manufacturer has completely redesigned the internal layout of the smartphone, which also includes motor with linear vibrations. Multiple cooling technology is also perfect. 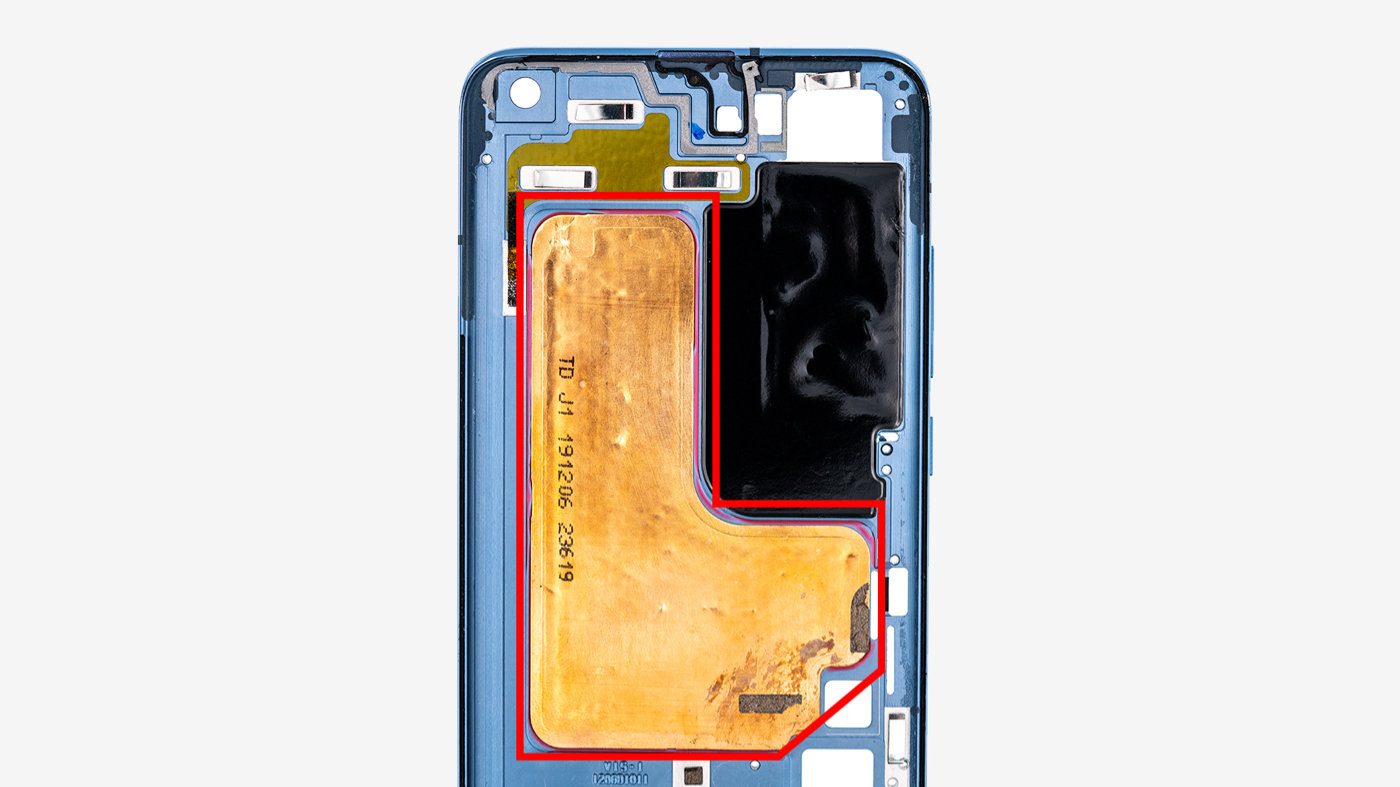 It is also integrated for better protection matrix temperature sensor and others smaller sensors distributed throughout the device. This allows the Mi 10 Pro to accurately map heat in a variety of areas in real time, including a 5G modem, processor, battery, charging interface and more.

As a result, the temperature control module, in cooperation with AI - artificial intelligence, automatically evaluates the values ​​and, if necessary, cools the device. In other words, a technological marvel that the average smartphone user is not even aware of.

We write about Xiaomi devices that no one else issues and we email them as well.
Subscribe. ?

We will probably wait much longer for the global version of Xiaomi Mi 10. Because of the coronavirus

Xiaomi's next hit: Toothbrush Sterilizer and Toothpaste Dispenser in One Received Coupon