Subsidiary brand of the company Xiaomi, marked Redmiis preparing his next smartphone. It will be a model with a designation Redmi K30 Ultra and these are new leaks that contain up-to-date information.

This time, the news about the upcoming smartphone was revealed to us directly by the executive director of the subsidiary Redmi. From preliminary and unofficial leaks, we can now consider the preparations of the device confirmed.

Lu Weibing, CEO of Redmi, published the following image via the Chinese social network Weibo without any prior notice. It captures the device, which should be a novelty from the workshop of the subsidiary brand. Based on previous leaks, this could be a model Redmi K30 Ultra. 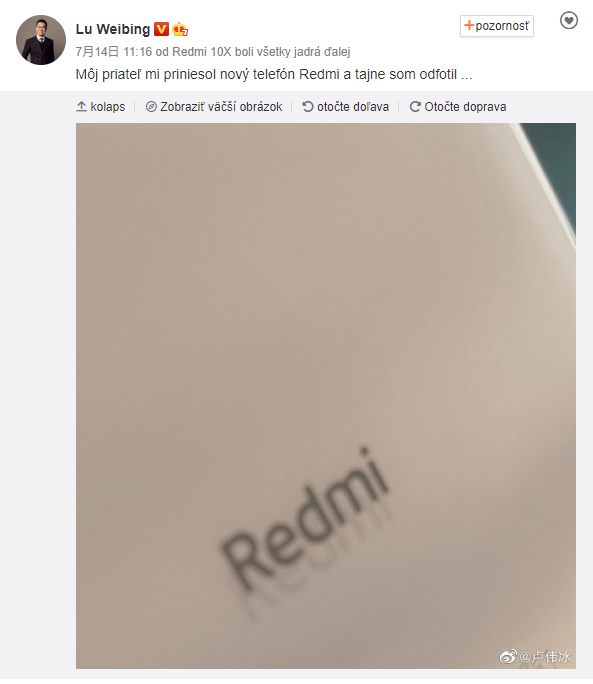 This image shows virtually no details about the device being prepared. However, we can see a gradient back wall with the Redmi brand logo. Unrelenting gossip about the upcoming model K30 Ultra so they will probably still gain momentum.

In the near future, we could look forward to another model in the current K series, which could debut directly with the flagship processor from MediaTek. Specifically, it should be a new model with the designation MediaTek Dimension 1000+.

These are possible features of a smartphone

If we take into account the just mentioned previous leak around the device K30 Ultra, we can expect that in terms of design it will be a device very similar to the model as Redmi K30 Pro respectively. LITTLE F2 Pro. The retractable front camera for "selfie" photos could also be improved.

In addition, the K30 Ultra would debut with a new flagship processor Dimension 1000+. The team would definitely become one of the cheapest 5G devices on the market and at the same time it would be one of the best equipped 5G smartphones. All this even in combination with a screen that offers a high refresh rate of up to 144 Hz.

This attractive and relatively affordable equipment could also include the highly anticipated up to 100W fast charge from Xiaomi. Charging the battery to 100% would take place in a truly record time.