Black Shark 2 Pro crushed the August AnTuTu. These are the most powerful devices - Xiaomi Planet

Black Shark 2 Pro crushed August's AnTuTu. These are the most powerful devices

As a well-known tool for comparing mobile devices in terms of performance, AnTuTu provides a reliable report every month on the most powerful mobile devices on the market.

The current ranking for August / August 2019 crushed the model from the brand Xiaomi. Specifically, it is a game monster called Black Shark 2 Pro. The evaluation is based on average test results, not the highest ones. In addition, the final result will be affected by the version of the equipment that has been tested.

In the TOP 10 also OnePlus, Meizu or Redmi

The ranking is dominated by the aforementioned Black Shark 2 Pro (12 GB RAM / 256 GB) with a total score of 469 points. Tight second place was taken by a gaming smartphone from Asus, specifically ROG Phone 2 (8 GB RAM / 128 GB). He scored 469 points. Both smartphones will offer the current Qualcomm Snapdragon 590+ processor.

He placed third with a distance of several thousand points OnePlus 7 Pro (12 GB RAM / 256 GB) with a Snapdragon 855 processor. The score of this device stopped at 447 345 points. A really decent result, but there is a slightly older Qualcomm processor. 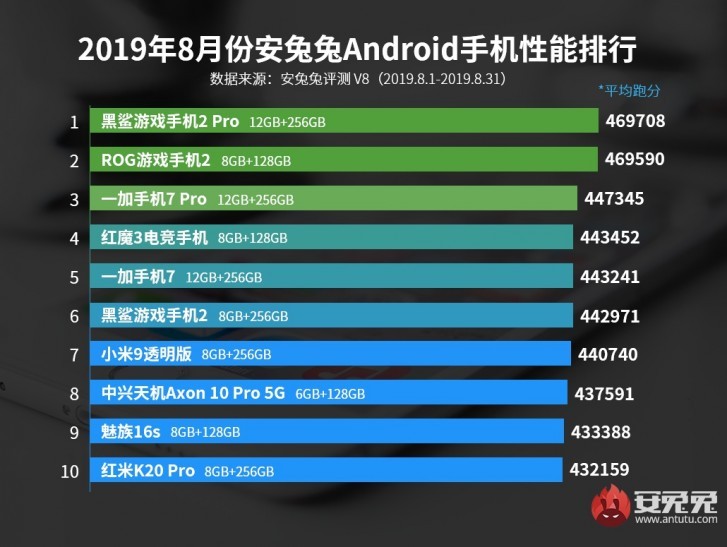 However, in terms of performance, none of the above definitely needs to be ashamed. However, the competition is not sleeping and we are already looking forward to the rankings for the month of September / September and also to other new models, which will be presented at the ongoing IFA 2019 trade fair in Berlin.